Some Facts About the 2012 Convention 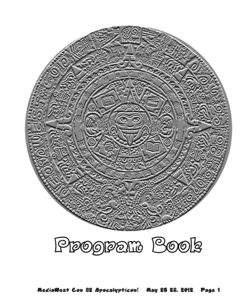 cover of the 2012 online program book, read this as a pdf 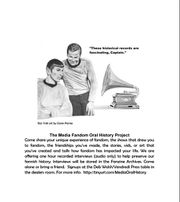 The fan skit written by Gordon Carleton was a parody of Star Trek set to the musical soundtrack of Grease. It was supposed to have been presented last year but it was postponed to 2012, and then again postponed due to lack of participation. From the first progress report: "Gordon was inspired to write a parody of Star Trek 11 (i.e. reboot) with music from Grease last year. Unfortunately, we were unable to assemble a cast, so it was postponed until this year. Volunteers are needed for all roles, as well as musical accompaniment (a piano is available) and stage ninjas. As it is a musical, most parts involve singing, though some more than others. We need a CHORUS of at least 3 people, who appear as various characters at various times (Vulcans, Cadets, Romulans, etc.) and back up the other cast members. Cast: Roberto Orci, JJ Abrams, Alex Kurtzman, Jimmy Kirk, Spock (his younger self), Nero, Spock 1 (his older self), Cadet Uhura, Capt. Christopher Pike, Cadet McCoy, Cadet Sulu, Scotty."

Media Misery Theatre was Saturday afternoon in the Con Suite.

There was a ShadowCast Performance of the Buffy musical "Once More With Feeling." Videos can be viewed here.

There were no nominations for the Fan Fund.

From the first progress book:

There are some useful things to know, both for folks coming to see the Masquerade, and for folks who are entering for either the first time, or for the first time in a while. The entry forms for the Masquerade will be available on the table right by the convention registration desk, and they're available 24 hours a day, until Saturday night. You can pick them up there, and drop them off in a drop box on that table. I'm around the con all weekend, so, if you have any questions for me, just come up and ask me. I'm happy to help.

On Saturday, after the last panels end in the Ballrooms, and the hotel staff are resetting the room for the Masquerade, I will be there for at least the hour between 6 and 7 PM. For anyone who wants a good look at the stage and where entrants will come on and off stage, that's a great time to see all that and work out your moves. You don't have to come at that time, this is purely optional.

Any entries that have any recorded music and/or dialogue for their performance, please put them on a CD. We have had so few requests for cassette in recent years that we've dispensed with that capability.

Starting in 2012, the winner of Door Decoration Contest “Best In Show” received up to 2 free memberships to next years’ convention. Also new that year: "We will have a “MW*C Members Favorite” award!" -- allowing attendees to vote for their favorite door. The progress report contained new rules concerning door decoration: "Due to remodeling the hotel has asked us to limit our decorating to the doors only. No walls next to the doors. No ceiling hanging anythings. Call it old school, call it a return to our origins, call it whatever you like but please respect their request so that we are allowed to continue to have a door decorating competition."

Winners were judged by popular vote at the convention.

A fan made quilt with an Apocalyptic theme also on display with viewers being asked to guess (or decode) the fandoms represented.

From the program book: "FoE: Are you on the path of the Light? Or does the Darkness whisper to you? Come explore path that calls to you, Forces of the Empire want you! FoE is a role playing club. We do Live Action at MediaWest*Con, and online the rest of the year. You can find Forces of the Empire in the Imperial Rooms near the Dealers Room. Friday night is our music night of dance and Role playing. Come join the fun even if for just the weekend."

From the program book: "CSI: CRIME SCENE INVESTIGATORS: All Investigators be ready! I have decided to try to get everyone together and give all pertinent information available for this when you get here. See the schedule posts!"

THE FANZINE READING ROOM MARKS ITS 30TH ANNIVERSARY WITH A NEW ACTIVITY -- GAMING!

In 1982 the 'Zine Room began as simply the place to peruse fanzines in comfort and quiet -- well mostly quiet. Over the years, the Room found itself first becoming the caretaker of what became the MW*C Permanent Loan Collection which is the con's collection of fanzines (covering vintage and more current 'zines from almost 30 fandoms), then a display area for 'zines, new and otherwise that were being sold at the con was added. Next came the site for the Fan Q ballot box (with many of the nominated 'zines on display) and, finally, for about the last 12 years, the 'Zine Room has been the site of the SF/Media Fan Fund charity auction which has expanded greatly from its beginnings.

Now, this year and after a try-out last year, the 'Zine Room expands its array of activities for con members by adding 2 tables (or possibly more) for Role-Playing Gaming under the direction of Chris Kaschafsky, long time gamer and gaming con organizer. A sign-up sheet and schedule with 4 hour time blocks will be posted in the 'Zine Room, to decide what games will be pursued and at what time. There will be up to 14 games available including "Settlers of Catan" -- up to 6 players; "Blokus "-- up to 4 players; "Hero I.K." -- 1-2 players, and the classic "Dungeons and Dragons" -- many players. We hope that many con members will be able to enjoy this opportunity for another fannish activity at MW*C. Come visit our space in the hotel's pub -- next to the elevators.