The concept and characters were initially introduced in two episodes of the CBS series JAG (season eight episodes 20 and 21: NCIS backdoor pilot called "Ice Queen" and "Meltdown"). The show, a spin-off from JAG, premiered on September 23, 2003, on CBS.

One of the strengths of the show is that its popularity appears to be able to weather major changes in the makeup of the team and their associates, although it is widely believed that it would not survive the departure of Gibbs; DiNozzo was expected to take his place eventually but is no longer part of the team since Season 13, and there is currently (2021) no obviously strong contender for the leading role. 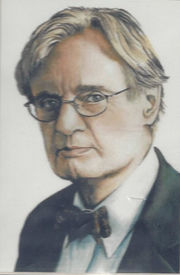 the character of Ducky, artist is Kate Nuernberg

In season six, two-part episode number #ep135 led to a spin-off series, NCIS: Los Angeles. A two-part episode number #ep252 during the eleventh season led to a second spin-off series, NCIS: New Orleans. On April 15, 2021, NCIS was renewed for a nineteenth season, which premiered on September 20, 2021, along with NCIS: Hawaiʻi their most recent spin-off.

A new spin-off called NCIS: Sydney was announced in February 2022, upcoming Australian police procedural television series. This being the fifth series in the franchise and the first to be set in a country other than the United States. It will debut on Paramount+ and Network 10 in Australia in 2023.[1][2]

At first glance it looks a small and fairly quiet – somewhat like how the show that has great ratings having won 27 out of 40 Emmy nominations, always being in some form in the Press –, but it is made up of loyal and devoted fans who keep communities, pages, sites and forums active even after the departure of so many actors, characters and crew members.

The most common slash pairing is Gibbs/DiNozzo, followed by DiNozzo/McGee and Ducky/Gibbs, mas nós últimos anos fanfics Gibbs/McGee has seen sporadic growth, most likely due to the new dynamics between the characters following Michael Weatherly's departure from the show.

But it's not just slash fics that fandom is made of, because there is content f/f, het and gen stories as well. However not in as much quantity as m/m pairings.

While the show has implied attraction between Tony and Ziva, much of the fanfics does not play on this subtext, and some fans are actively opposed to it[note 1] much in part due to how the character relationship have been handled from their first iteration and in subsequent episodes.

Ziva was introduced at a critical moment in the plot - after Kate's death by Ari who knew Ziva intimately - as well as his role as a double agent in the service of the Mossad. The tensions between Tony and Ziva are palpable, even physically and many fans are very uncomfortable with the show leading to this becoming a romance.

The single biggest canon plot point, or (strange attractor) to inspire fiction is the death of Kate Todd in the last moments of the season two finale (episode 2.23 "Twilight). Another common story type are prequels, showing how individual characters met before the beginning of the show.[note 2] Hurt/comfort is a common theme, especially in gen fic, with Tony vying with McGee for status as most-whumped character. Following the same theme of competition for status, there are works where Tony and McGee vie for Gibbs' attention in the professional and sometimes sexual sphere.

The canon pre-series murder of Gibbs' first wife Shannon and daughter Kelly is sometimes used as a springboard for fix-it plots (especially adoption fics), in which one or both escaped death and became characters in another fandom.

Most fandoms that cross NCIS do so due to two more relevant factors: content themes and actors.

In this list we have the shows CSI, Criminal Minds and Bones due to the universe of forensic investigation. Universe of the military – naval, army and aeronautics – we have Hawaii 5-0, Stargate Universe and JAG who and where this show first came from. Not much related to the show's theme we have the fandom of Supernatural what is also fairly popular.[3]

Crossovers with Dark Angel and Bull where Weatherly performed is also common, as is the West Wing fandom because often draw on Mark Harmon's role as Agent Simon Donovan and that character's death.

Illya Kuryakin the once upon a time known as the original fangirl bait from The Man from U.N.C.L.E. is played by David McCallum, so crossovers in this universe are not uncommon. Related to this fandom we have the Ducky shipping with Albert Stroller from Hustle (a character played by Robert Vaughn, who was Napoleon Solomon the Illya's partner on MUNCLE), and some crossovers blend the characters from all three series.[4]

Ziva is frequently the object of character bashing[5], and sometimes called a Mary Sue.[6][7] Ziva bashing came about at first because fans resented her taking Kate's place, but increased due to the exaggerated violent and arrogant nature of the character. The Ziva Bashing trend has grown even wider and stronger in recent years do to the character being written as having betrayed and lied to the team, and assaulting Tony. In addition to her role as an agent at the behest of the Mossad, obeying her father who was the director of the institution.

NCIS is notorious for "fridging," killing off strong female protagonists,[8] especially if they have had any relationship with the male leads. Gibbs has been in relationships with at least six murdered women (beginning with his first wife and daughter pre-series), other examples include Caitlin "Kate" Todd, Jenny Shepard (NCIS Director and one of Gibbs' former lovers), Michelle Lee, Jackie Vance, and many others. By comparison the only recurring male characters to have been murdered are Mike Franks, Eli David and Ned Dorneget, all secondary characters appearing infrequently. The show also featured an implausible number of female serial killers in early series, though this is now less common.

See the category of NCIS Zines for more.