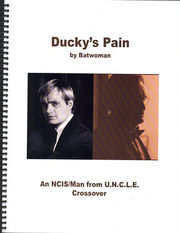 Ducky's Pain is a 110-page gen crossover novel by Batwoman and edited by Jeanette Poissant.

It is a companion zine to Past and Present.

When the NCIS team is called out to investigate the death of young woman, Ducky has an unusual reaction. Suddenly, the kindly gentleman the team knew has disappeared, replaced by a man with a different accent and attitude, a man who is friends with U.N.C.L.E. agents. With the help of U.N.C.L.E., Ducky works to take care of something that should have been done years ago.

A description of this fiction universe was printed in the companion zine, Past and Present:

For those of you who are not familiar with the "Ducky's Pain" universe, here is a brief summary of things you should know.

• Napoleon married a civilian and together they had twins, a boy and a girl. A monstrous enemy killed Napoleon's wife and severely damaged Napoleon's knee, requiring Napoleon to use a cane to get around. He eventually becomes the head of U.N.C.L.E.

• lllya started dating April while they were at U.N.C.L.E. About a year after their wedding, she became pregnant. Just as she found that out, the couple was attacked by the same person who had murdered Napoleon's wife. It was decided that for their safety, April and lllya would leave U.N.C.L.E.. When the Kuryakins found out they were expecting their second child, lllya decided to go to Medical School and change his identity to Donald Mallard. April and the children stayed with lllya until after his residency then decided the children would be safer if the family split up. April moved to Minnesota with the kids Nick (Nico) and Anna (Anya.) Anya, a graphic designer, is now married and Nico is an ER Doctor.

• Napoleon's twins were also put into hiding. They were sent to Russia. Eventually they had children of their own, making Napoleon a grandfather.

The zine's author also included some photos in the companion zine, Past and Present, that are pertinent to "Ducky's Pain."

They are black and white screenshots from both Man from U.N.C.L.E. and NCIS. Included in the intro are also several black and white photos of the actors as they appear in roughly the mid-2000s to illustrate that they have aged. Two additional type of photos is also used, and these appear to be fan casted.

Troubles with an Agent

In 2008, the publisher became upset when an Agent With Style sold this zine, and one other title, with unauthorized covers, something that generated a discussion. Some excerpts are below.

[periwinkle27]: If you don't know, I have run a little publishing business (cookbooks, wedding bulletins, dance recital programs, Master's thesis) for years from my house. This year I decided to produce a few zines for fun.

They were supposed to be distributed though North Coast Press but Lisa didn't make it to Media West, so I used an agent.

Now, there were two different types of zines. One was "Ducky's Pain" which has a white cover with one striking graphic. The others were some of the BOLO series. Part of the point of the BOLO series is that the covers always match in color (think like "Relative Secrecy".)

ETA 11 pm: I failed to mention that she had permission to print a certain number of copies but with the specified covers, which she acknowledged. It's not the printing that's the issue - it's the changing of the cover.

Then I started seeing on ebay zines of these titles but with colored covers. I had been writing to ebay and saying those were xerox copies until I learned that the agent had replaced my covers. Now there are all these yucky copies floating out there, and if someone wants to resell it I won't acknowledge it.

So - have you ever had this happen and what do you think I should do next? Vent, fire her, post a statement on my site, tell the world? And if you happened to buy one, let me know and I'll send the proper cover.

[suchthefangirl]: I asked my husband and a friend, both of whom are professional authors, and both were incensed. They agree that it is not an agents place at all to do something like that. They said an agent is like a babysitter, their job is to care for the baby not tattoo it.

I didn't see the agreement you signed with her, but if you did sign one, and she was only given the rights to print and not to change anything, then I would think that firing her would be a good place to start. Letting her know that this is not acceptable is very important.

Good luck. As far as I can see, you are in the right.

[nakeisha]: At the end of the day it's going to come down to precisely what your contract with the person said.

If it specifically in words of one syllabul said 'you may print xx number of zines but they must be exactly as they are in all respects' then yes you have a good case to fire her and rant about her.

She shouldn't have changed the cover whatever the contract said to be honest, IMO - but before you do rant, vent, fire her, etc. etc. I'd double check exactly what was agreed between you.

Also what was her explanation for changing the covers?

As for what you should do. Well ranting and posting a statement could only back-fire against you, if she chooses to rant in return - you really don't want to get into a high stressed argument that could end up with you being under fire.

So personally I'd just not not use her again and I'd tell her why.

But, as I say, a lot of what you do/say/can do is going to depend precisely on what was agreed between you.

[periwinkle27]: It specified the color of the covers.

She did use the argument that she had experience, and I pointed out that I have 17 years to her 20 and she was only to distribute, not change. I also sent back the correspondence that showed where she had agreed to the covers as was.

One thing that really bothered the author and me was that the agent might know catchy colors, but she had no eye for art. And she told me that white covers don't sell. I had sent copies to the Orphan Zine table also and all of them sold.

As you know, BOLO is also supposed to be consistent from issue to issue so that the buyer immediately knows it's the NCIS zine.

She changed one from white to cream

one from cream to salmon

one from cream to bright blue. (I'm not listing titles so that she can't come back at me and say I posted stuff about her.)

I think they look extremely cheap.

This post incidentally, was my revenge. I had already fired her.

[k[elliem]]: If this is who I suspect it was, she has a reputation for underhanded dealings. The woman I am thinking of once started reprinting a limited-edition Due South zine [1] I was involved with completely without our permission whatsoever. [2]