Past and Present (crossover zine)

See also Past and Present (disambiguation). 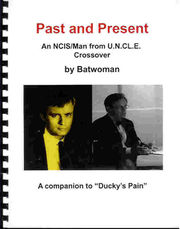 Past and Present is a gen crossover 100-page anthology by Batwoman.

It is a sister zine to Ducky's Pain.

Last year I had the privilege of publishing "Dueky's Pain" by Batwoman. It was a clever crossover between NCIS and The Man From U.N.C.L.E with Ducky/lllya joining forces with April, Napoleon, Mark and Gibbs to eliminate a monstrous enemy. I got an amazing number of comments on the zine, most of them asking for a sequel. When I mentioned it to Batwoman she didn't feel up to writing another novella right away, but she did agree to write some stories. And here they are.

These stories cover a wide range of time, from lllya's first date with his future wife to Ducky's family's reaction to "Meat Puzzle." I think you'll enjoy them very much.

A description of this fiction universe was printed in the introduction:

For those of you who are not familiar with the "Ducky's Pain" universe, here is a brief summary of things you should know.

• Napoleon married a civilian and together they had twins, a boy and a girl. A monstrous enemy killed Napoleon's wife and severely damaged Napoleon's knee, requiring Napoleon to use a cane to get around. He eventually becomes the head of U.N.C.L.E.

• lllya started dating April while they were at U.N.C.L.E. About a year after their wedding, she became pregnant. Just as she found that out, the couple was attacked by the same person who had murdered Napoleon's wife. It was decided that for their safety, April and lllya would leave U.N.C.L.E.. When the Kuryakins found out they were expecting their second child, lllya decided to go to Medical School and change his identity to Donald Mallard. April and the children stayed with lllya until after his residency then decided the children would be safer if the family split up. April moved to Minnesota with the kids Nick (Nico) and Anna (Anya.) Anya, a graphic designer, is now married and Nico is an ER Doctor.

• Napoleon's twins were also put into hiding. They were sent to Russia. Eventually they had children of their own, making Napoleon a grandfather.

They are black and white screenshots from both Man from U.N.C.L.E. and NCIS. Included in the intro are also several black and white photos of the actors as they appear in roughly the mid-2000s to illustrate that they have aged. Two additional type of photos is also used, and these appear to be fan casted.