You may be looking for Damages, a Forever Knight story. 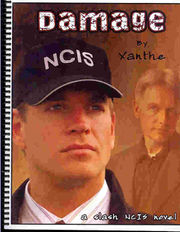 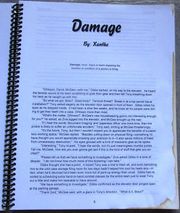 Damage is a slash NCIS 215-page Gibbs/DiNozza novel by Xanthe.

From a distributor, Agent With Style: "When Gibbs investigates a minor robbery, he uncovers something much more sinister, and the resulting investigation has unexpected and far-reaching consequences."

[Damage] was heartbreaking. I generally don't read anything that focuses on child abuse but this was handled so well. I'm glad I read it. The sexual abuse was all in flashbacks (which were well done) and Not overdone or made to be titillating. Very disturbing but good. I liked the slow recovery and am grateful that the MC was allowed a recovery. I'm not really up on the show this was based on so I read it as if it were any other book and it held up. [1]

Xanthe's love of over-the-top angst was a little too much for me here. I didn't mind it in The First Collar but in Damage I was antsy for the book to come to an end.

Damage deals with Tony's childhood sexual abuse and his Daddy issues. I don't know if the former is alluded to in the actual tv series but I've read enough of the fanfic summaries to conclude the tv series version does have him with a troubled relationship with his father. I've collected a lot of this fanfic but have bypassed the Daddy-issue ones if that's the main theme and after Damage, I can see that was the right decision. But then, with Tony as the MC and Gibbs being Gibbs, 'Daddy' is never far away. A bit icky for some (like FW2) but it doesn't bother me at all. I like May-December romances in the first place and these DiNozzo/Gibbs romances are even better than what I've already read.

The story, briefly - a teen, Justin, is caught stealing an Admiral's laptop and the housekeeper calls NCIS. She explains why she did this to Gibbs cos he, too, wants to know. Long story short, Justin has pics of him on the Addy's laptop and no guesses allowed as to what type of pics they are. So now, Gibbs is interested because it looks much bigger than just a few dirty pics.

It gets even bigger than this. In fact, it explodes, sending Gibbs and his entire team into a daze, wondering if anything will ever be the same again. Because not only does it involve under-aged boys raped over several years by the Admiral and his pedophile buddies; not just because Justin is Boy # 1 out of at least 50, but because DiNozzo, one of Gibbs' own, is Boy #43. If you've read any of this fanfic, you'd know Gibbs is usually portrayed as having been in love with DiNozzo since the latter joined the team. If you watch this series regularly, you'd know Gibbs isn't a man who does anything in half-measures.

So Gibbs and his team, minus Tony, swings into action and this is the part that has made this fanfic so addictive for me - most stories have some action/suspense balanced well with the developing romance and now I've got a load of these with the hottest pairing I could find, all for free. Still, my Gibbs/DiNozzo obsession wasn't enough to enable me to go through 454 reader pages without feeling surfeited. If the author had trimmed this down by a hundred pages, this would have been a 5-star story. As it is, I don't think I could survive Two Wolves because Kate warned that it's very violent.