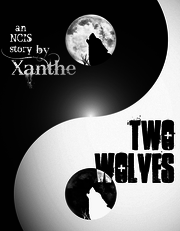 Two Wolves is a Gibbs/DiNozzo novel by Xanthe. Because of its length the story was posted in six chapters, starting on Monday June 6th and finishing on Saturday June 11th, 2011.

While investigating the disappearance of a Marine, Gibbs is abducted, sold, and forced to fight in a brutal tournament where the price of winning is almost as high as the cost of losing, and death waits constantly in the wings. After five months of hitting brick walls, Tony finally hatches a desperate plan to rescue Gibbs, only to find him a very changed man. In order to escape, Tony has to remind Gibbs who he is and awaken a sleeping wolf inside him. But, haunted by his ordeal and the acts he’s been forced to commit, can there ever really be a way back for Gibbs?

It's been thirteen years since I wrote Subterfuge in The X Files fandom. That had a very similar premise to this story, but Two Wolves is a very different kind of story and goes into much darker territory. However, there is one scene in this story that is a deliberate homage to Subterfuge.[1]

The story contains rape, non-con, whumping, violence and the Fuck or Die trope.

There's one thing I regret. It's a fact that I know original characters... Gibbs reminds me my professors from University, so it's rather weird to read about him as a MC of M/M story ;) As for Tony, ekhm. How am I suppose to believe in his romantic nature? He's such a clown. I know, it's just a mask, it's not his true 'self'. Still, it wasn't easy to forget about all my knowledge and enjoy the story.

Anyway, that was something new. For me, I guess. Usually, when book has mystery and is brutal, it's thriller and nothing more. When I get something romantic, everything else is moved into the background. Sometimes I need an equal combination of this two elements. Here it comes. Interesting idea for a book, even if a little bit scary. One thing I can admit, I dont' want to know if this scenario could have happened in RL. Brrr... Definitely horrible. This story is about survival, fighting for it and for humanity. How much people can do in order to survive and how to do it, not loosing yourself.

Last thing, the song "Wonderful World" by Sam Cooke. It always reminds me of M/M romances, well, I can't help it :P But when I listen to it, I think about something sweet/cute/adorable and after that, my vision has changed. Now it's bittersweet with a hint of hope. Still romantic, all in all, but different.[5]

Absolutely loved this story!!!! Stumbled upon it and couldn't stop reading it and did not want it to end! [7]