In fandom, meta (also meta essay) is used to describe a fan-authored piece of non-fiction writing discussing any aspect of fandom, fanworks, or the source text. This can include discussing characters and their motivations, fanfiction tropes and trends, fan activity, particular plot elements, choices by canon creators, alternate possibilities for canon and much more.

Meta can be fandom-specific, or it can be pan-fandom, commenting on fannish trends and tendencies that span fandoms and fan generations.

The term “meta” describes something that is an abstraction of itself (X about X).

Meta, in Fandom terminology, is usually used to describe the analysis of a show, its characters, or Fandom itself. Very often, people create meta that is almost academic in nature, citing multiple resources and defending their point of view.

Meta [is] a blanket term to include things like headcanon, ship manifestos, theories, and character analysis. [1]

Meta can be described by both intention and scope. [It can be] about fandom as a whole, a particular fandom, a particular event, a particular canon, a particular episode or aspect of something, it all counts. Fandom talking about itself or its interests in a thoughtful way is the best description we can come up with. When it comes to intention, pretty much anything that isn't fictional or conversation would count. Meta can be very long (even a series!) or it could be just a few paragraphs. [2]

The definition, and terminology, used to describe meta has varied over time and with different fannish platforms. See Origin & Evolution of the Term.

For Fanlore pages about meta, refer to Category:Meta.

Origin & Evolution of the Term

Meta describes a concept which is an abstraction from another concept, used to complete or add to the latter. It is derived from the Greek preposition and prefix meta- (μετά-) meaning "after", or "beyond".[3]

What constitutes meta has varied over time and with fannish platforms, as each platform has its own community norms, and constraints about what can be published. On mailing lists, for example, discussions of the source text, characters and fanworks was taken for granted - these were simply everyday discussions. The prevailing term, therefore, was metadiscussion, which means "discussing the discussion", or shifting away from the topic at hand to talk about how the topic is being discussed.

LiveJournal and journal-based fandoms popularised the concept of the "meta essay", which was a long-form piece of non-fiction writing on any canon or fandom-related topic. This informs what many fans think of as meta today, although when it first emerged, this 'new' definition of meta was controversial, with fans believing there was no need for a separate term to refer to simple discussion. (See Mailing Lists and the Emergence of "Meta").

While discussion would take place in the comments of meta essays published on journal platforms, there was always a clear separation between the original "essay" and the ensuing discussion. However, this line has blurred with the advent of microblogging platforms like Tumblr and Twitter, in which a relatively brief initial post or comment can spark off a discussion that produces meta - yet the original post arguably does not qualify as a meta essay in its own right. There is yet to be an agreed-upon term that distinguishes these discussion-formatted meta from essay-formatted meta ("metadiscussion" being an established term to refer to something different).

Meta can also take the form of multiple posts (by the same author) in a reblog chain or Twitter thread, either to separate the initial observation into individual thoughts or to circumvent the platform's length limitations. The nature of microblogging platforms can make the subsequent discussions difficult to follow, with multiple 'versions' of the same meta branching off in different directions as different fans respond and add their thoughts.

When the term "meta" first entered usage as a way of describing in-depth fannish essays about canon material, it received pushback from numerous fans who considered it an unnecessary term. On fannish mailing lists, discussion about canon was the norm, and thus these fans considered it ridiculous that LJ users had coined a new term for such a straightforward activity.

Seriously, what is with this new 'meta' definition? Does anyone understand why people are using this term for basic discussion now? I saw it all over the place, with people defining anything that wasn't creative work or recommendations of creative work as 'meta'. Since when did talking about the source become 'meta'? And if basic discussion is meta now, what is the discussion style formerly known as meta now called? (Whether the former metadiscussion of 'discussing the discussion', or the former metadiscussion such as happen(ed)(s) on FCA-L, where broader fannish topics are discussed.) [4]

I absolutely loathe that normal fan discussion is now being labelled "meta" and as a result, many fen are increasingly eschewing the idea of discussion because they erroneously think discussion must mean an academic treatise! Meta-analysis has a very specific meaning. I'll even accept the term being broadened to relate to non-statistical overview analysis of fandom interactions and trends. But to call any fandom discussion "meta"? NO, a thousand times NO. It drives me nuts that a number of influential fen with academic backgrounds routinely promote such usage. [5]

However, commentary from the creator of Fanfic Symposium, a site for hosting meta essays founded in 1999, suggests that while discussion abounded in mailing list fandom, it didn't typically take the form of in-depth, long-form essays, of which there was still a lack in fandom at the time. Prior to the emergence of "meta" as a term, these essays were found only on "rant pages", in which fans would hold forth on various topics on their own website.

In 1999, fannish discussions were taking place in multiple venues, both online and offline. Mailing lists in particular were a popular choice in the fandoms I frequented. Services such as ONElist, eGroups, and later Yahoo Groups (http://groups.yahoo.com/) were emerging as a viable choice for those fans who wanted to start lists but did not have access to a server, although the days when every character or pairing had its own list, or even when individual fan writers had personal lists, were still around the corner. Lists remained fairly concentrated, with perhaps two or three discussion and/or fiction lists largely accounting for the discussion in a given fandom.

These lists were good for many things, but longer, detailed, carefully organized essays were not among them. In addition, although lists to discuss issues and themes across multiple fandoms existed, they weren't always easy to find.

Several writers I knew had solved this problem by adding rant pages to their fiction sites, places where they might expound on various topics. However, because I wasn't producing anything in the way of fiction at the time, I didn't see how I could attract readers to such a site with only my essays. Then, a solution presented itself: a site where anyone could submit essays. Surely there were others like me out there, looking for a space to hold forth. And indeed there were.[6]

Fanfic Symposium's creator also acknowledged that the rise of LiveJournal fandom and the associated proliferation of meta essays had effectively rendered FS moot:

Perhaps the single most significant fannish change in the last 10 years was also the reason the Fanfic Symposium itself is no longer active (note 1): the move from mailing lists to LiveJournal (http://www.livejournal.com/), a combined blogging, discussion, and social networking site. The Symposium was born out of a desire for a space that allowed not only for longer explorations, but also for discussions of themes and issues that crossed fandoms. LiveJournal not only allows for those discussions, but in many ways actively promotes them. The kinds of discussions that once took place on the Symposium have become the norm in LiveJournal-based fandom, and have in some ways abstracted even further.[6]

Sometimes fanworks themselves become metafic, where characters within the text comment on canon or fandom. Back when RPF was rare, some people called any story meta where the characters and the actors for those characters interacted. See some fiction examples.

A fic that utilizes the pairing of Meta/Fandom: Untitled Anthropomor-Fic, Archived version (NC-17) by alyse (219 comments) ("But Meta had a way of making that seem okay when it had Fandom at its mercy. Meta had a way of making everything seem okay when it touched Fandom just right. When Meta did that, Fandom was just Meta's bitch. And Meta knew it.") (2007)

In vids, the tag meta is occasionally used when images of fans appear along with images of characters, but the term metavid is more commonly used to describe a vid that comments on a specific show, or its fandom, or fandom as a whole.

Fans have also had a lot to say about fandom itself, often in the form of meta essays. These can take the form of formal essays, but also as posts to personal journals. 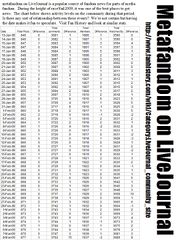 This shows some 2009 stats gathered by Laura Hale on a flyer that was distributed at MediaWest*Con. The purpose of this flyer was to send fan traffic to her controversial Fan History Wiki: "metafandom on LiveJournal is a popular source of fandom news for parts of media fandom. During the height of racefail2009, it was one of the best places to get news. The chart below shows activity levels on the community during that period. Is there any sort of relationship between these events? We're not certain but having the date makes it fun to speculate. Visit Fan History and look at similar stats."