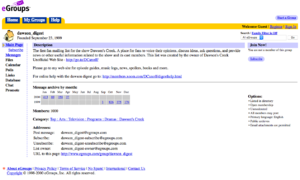 An example eGroup page: dawson_digest, a Dawson's Creek list, as it appeared in April 2000.

eGroups was a mailing list service launched in 1998. It merged with competitor ONElist in 1999, and in August 2000 was purchased by Yahoo! and became Yahoo! Groups.

eGroups was started as a service called "FindMail" by Scott Hassan in early 1996.[1] eGroups was officially launched in 1998.

It was announced in November 1999 that ONElist would merge into eGroups,[2] and by early 2000, all ONElist URLs and email addresses redirected to eGroups. Some groups were renamed (if both ONElist and eGroups had a group with the same name).[3]

Less than a year later, in August 2000, the merged eGroups was bought by Yahoo!, and Yahoo! merged old ONElist and eGroups communities into Yahoo! Groups in early 2001.

eGroups briefly preceded Yahoo groups before Yahoo ate it up. Oh you guys. Drama wore a different face then. Imagine a world where you sign up for the single listserv devoted to your OTP in the Daily Digest form, so all the emails hit your inbox at once at the end of the day, and you see that two or more listsibs have been going at each other for HOURS about whether or not Severus Snape came from money (in 2001), baying for blood in inboxes all across the world until a mod steps in with something like, “This is not what I like to see when I come home from work.”