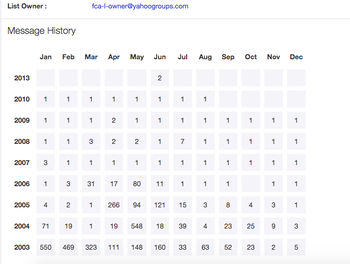 The list started up in late October 1999 and was very active for several years, only slowing down in the mid-2000s. It was founded by Cereta and Sandy Justine.

FCA-L also had an associated website, the Fanfic Symposium, for essays about fannish topics, which were occasionally referred to or discussed on the list. The Symposium was updated until the end of 2006. The first years the website also had a message board for discussion, that eventually was lost because of a server crash, and replaced by an LJ community ffsymposium.[1]

Some History: From Apology for Criticism

From the November 4, 1999 essay by Cereta at Fanfic Symposium:

About a week ago, on little more than a lark, I threw up a page starting something called the Fanfiction Critics Association. I'd mentioned the then-fictional organization in my mock autobiography here at the Symposium as a joke, but then started thinking that it wasn't such a bad idea. As you may have guessed, I enjoy critical inquiry into fanfic (well, duh), and identifying other like-minded individuals is often difficult. A fair amount of net fandom (I can't speak for non-net fandom, not being involved in it) is deeply hostile towards critical inquiry, especially (I hate to say it) the fandom where I spend the most time (The Sentinel). When I posted the FCA page, it was with the intention of giving people interested in and supportive of critical inquiry a way to identify themselves, with perhaps the vague hope that we might start some conversations somewhere down the line. I really hadn't thought much further than people, as a friend put it, "putting the graphics on their pages and looking cool."

Now, I am many things, but naïve is not one of them. I knew that the idea of the FCA would not be universally applauded, and I waited for the negative reaction. Thus far, I have received only one e-mail objecting to the possibility of an FCA discussion list that would publicly discuss publicly posted fanfic (in fairness, this person told me "several people" had contacted her with concerns). The bone of contention would seem to be this sentence in the FCA "charter": "Any piece of writing published in a public venue, such as a web page, archive, fanzine, or public mailing list, is subject to public examination and response."

Should the FCA develop beyond a statement into some sort of community, I know that there will be those in fandom who will not like it, and who will find its presence threatening. To them, I can only offer this Apology, and hope for peaceful coexistance. This is why I do what I do. I hope it helps.

A response to the site's introduction announcement on Virgule-L:

This sounds interesting -- though frankly, over the years, all the whining about "we want more criticism" and "they (the fluffy bunnies--the anti-critique people) are repressing us" has become rather suspect to me.

I think the real reason that people don't critique more has nothing to do with needing the right forum, or fluffy-bunny repression: the real reason is, critism is hard and time consuming, and we're mostly pathetic whiners who want someone thoughtful and clever to critique our stories, but never seem to find the time to do thoughtful and clever critiques of other people's stories.

But, just in case I'm wrong, and this list turns out to be just the forum fandom has always needed, unleashing untold quantities of useful critique unto fandom, I hope they keep an archive. [3]