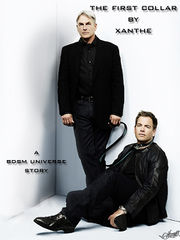 cover graphic by colleendetroit for the online version 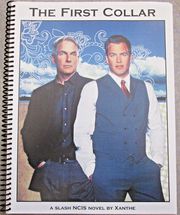 cover of the print zine 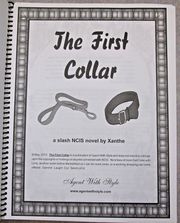 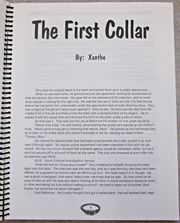 The First Collar is now available in zine form from Agent with Style. My copies just arrived today and it looks great!

Usual note - I don't make any money from zines of my stories. I'm just happy they are out there in hard copy format for people who want to read them in that way. People often ask me about this: The truth is I honestly don't care about making money from my fanfic writing - I do it because I love it and want to do it. Also the characters aren't mine and there's a big grey area in copyright that I wouldn't want to step into." [2]

Author's summary: Gibbs is a top with a desperate need to atone for his past mistakes and a habit of collaring the members of his team. Tony is a sub who distrusts all tops and has never yet agreed to wear any top’s collar, not even in play. Sparks fly when they meet for the first time – but will Gibbs be able to protect Tony from a past that is rapidly catching up with him, and will Tony ever trust Gibbs enough to wear his collar?

Holy crackers! One long, intriguing UST with Gibbs and Tony. Feels like there should be a couple more. Great dynamics and good story line driving them together. Very nice. [3]

Well this one was not as great as 24/7 at all. I had to skim some about characters I did not care about. I only wanted to read about the two mc's. The interaction of the two were awesome but I wanted more of just the two of them. [4]

The only reason why Xanthe's NCIS fanfic loses out on Hill's published work is because she (for me, anyway) made an error in continuing this story in Hiding in Plain Sight where, to get to where Gibbs and Tony finally consummate their relationship, I'd have to wade through 200,000 words of m/f, m/m, f/f and God knows what else sex with characters from Stargate-Atlantis. I already had to Wiki the NCIS series just to get some basic info on the NCIS tv series and I don't want to have to do that for another series I'm not even interested in!

Yep, no sex between Gibbs and DiNozzo in TFC. I'm disappointed, yes, so I removed one star from my original rating of 5. Xanthe was able to evoke all the emotions I, if I were a writer, would want from a reader. I felt admiration, sympathy, empathy, hope, frustration, more hope, anxiety and fear...and delicious anticipation...for DiNozzo right from the very first page. Before I even got to the end of this 300-page story, I knew that if such a world as the one Xanthe created here existed, I'd want to be Tony - because of Gibbs. Gibbs gave Joey Hill's Tyler a good run for his money.

In the book's BDSM universe, the D/s relationship is the norm and I thought the way Xanthe weaved its rules and regulations into the story was wonderful. I felt everything Tony did with regard to his longing for a Dom, a top, worthy of his trust, his deep-seated distrust of all tops and while it took 300+ reader pages for him to get to realize he'd found The One, it was worth the wait. Gibbs was incredible. Even though one could say the whole thing was terribly over-played, over-the-top, over everything that - if left to a publisher - would have been pared down, muted and lobotomized (as happened, it appears, to one of my fav free online reads recently).

The transition from juvenile goofball Tony to a mature, trusting sub is a long one and commences when Tony, having just chained an abusive top to the bed (it was just a one night stand), his clothes stained with cum and he's reeking off sweat and sex, arrives 20 minutes late for his interview with Gibbs. My heart went out to Tony right here. I just wanted to hug him and make it all better - after giving him a bath! But Gibbs' situation had me chuckling away as he went through each candidate, looking for a 2ic for his team. This section was one of the highlights for me. I just about cried when Tony pleaded with Gibbs not to fire him. But I don't want to give spoilers here so go read for yourself! Abby and Ducky added to the charm of this series. I'd wondered, when I read, the Box Step series my first NCIS fanfic just before this book, why Ducky got that nickname. I found out here, in TFC. Ah, the joys of an NCIS newbie:D

Tony, the ever-distrustful sub, finds a top he can trust but it's a long, painful road as he battles being set up by his ex-boss/top, Dana, whom I nicknamed Cruella. Thankfully, the bloodplay Dana relishes did not involve Tony but he had to watch:( But...Gibbs was right there, holding on to him tightly, hand clasped over Tony's mouth to keep him from giving their presence away - and a little more of Tony heals with just this little scene.

Tony is about to be hung out to dry, the perfect fall guy for Dana but, of course, Gibbs saves the day. And saves Tony's soul. Poor guy is yearning for Gibbs to fuck him - not that he lets that be known - but Gibbs has vowed he'll never take another sub to his bed. Gibbs has his own major issues - darn, do I have to read the sequel to find closure??? - so while he collars his whole team, it is not a sexual relationship - to my relief because I really don't want to think about Gibbs having sex with Ducky. Double ew...

The prequel of hiding in plain sight, depicting how Tony meets Gibbs and gets collared by Gibbs eventually. Look forward to the next book when they finally admit there are mutual attraction and affection between them. [6]