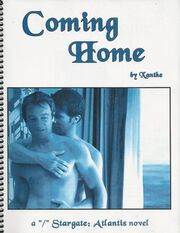 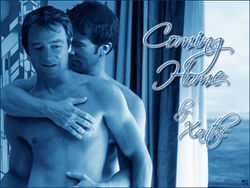 In November 2006, another fan, Helen, posted Take Clothes Off As Directed, a responsefic to Xanthe's story premise from Coming Home.

Coming Home was posted in nineteen parts over the course of ten days, resembling the old-fashioned mailing list restrictions on post length. The daily postings built up a level of expectation and excitement among readers and inspired discussion between postings.

Coming Home was well received by the fans of the original General & Doctor Sheppard novel and also drew in a new audience, some of whom found the compare and contrast of the original difficult to find a connection with but could lose themselves in the straightforward love story of the prequel.[3]

The relationship between John and Rodney is what makes this story work for me. John is his usual closed-off self and Rodney is self-destructing (which, when you think about it, is just like canon: how many people manage to piss off their superiors so much that they get exiled to the *enemy's* camp?) and it's hard to imagine any two people who need each other more. Their relationship develops naturally over the story (which loosely follows season 1 canon) and I defy anyone not get get all mushy inside as John starts to open up and Rodney learns how to trust again. Even better, you have excellent showings by virtually all of the first-season SGA cast (Carson is especially good) and the plot ties in bits of canon and an original storyline to create a deeply engaging and very well written story.

Final verdict: This is a fascinating AU with excellent characterizations and more shmoopy romance than you can shake a stick at. Beautiful, touching, and highly recommended.[4]

The passage below is not from a key scene, and one of the characters is minor, but it illustrates assumptions we carry around in a particularly useful, memorable way.

Radek interupted him, looking kind of angry. "I do not top."

"I do not sub either," Radek said.

"No." Radek looked uncomfortable. "I do not do any of these things--they do not appeal to me. I identify as non-dynamic."

"Really?" John was a little shocked but he did his best to hide it.

"Also...I am not interested in Rodney that way because he is a man."

John gazed at him blankly and Radek flushed an even deeper shade of red. He leaned forwards and spoke in a whisper. "I am monosexual."

John did his best to keep his face non-judgmental because really it was no business of his if Radek only wanted to sleep with women, and he was cool with it in any case. He'd never actually met any monosexuals but there was quite a strong monosexual movement that had gained acceptance in the past few years.

It's a pretty simple reversal, and yet I found it a very effective reminder of the way I and most people normalize certain mainstream arrangements, and unconsciously relegate other arrangements, other desires, to the margins. I frankly feel a little indicted by John's insistence that "he's cool with" the fact that Radek is "monosexual." I value tolerance very highly, especially now when our gains in gay rights are under siege by reactionary forces in many different parts of the world, but I do tend to lose sight of the fact that the mere idea that something deserves tolerance is marginalizing. That doesn't make tolerance wrong--or diminish the hideousness or immorality of intolerance--but you just have to imagine someone glibly reassuring you that they're "totally cool with" the fact that you're a heterosexual married female to realize how annoying and condescending it would sound.

In 2006, Coming Home was nominated for the 2006 McShep Awards, where it received second place in the AU category.[8]

In November 2006, Helen posted Take Clothes Off As Directed, a responsefic to Xanthe's story premise from Coming Home, that took the original novel's universe and restructured it into a way to explore gender roles and sexism in modern society. The story achieved popularity with some readers for its metaphorical approach to gender roles. However, the story generated a lot of controversy. See Take Clothes Off As Directed for more information.

The unique universe and strong emphasis on romantic relationships in Coming Home inspired two stories that retold the origins of the main characters and their developing connection. Both stories adhered closely to the romantic tone set forth in the original story, and the authors sought and received permission from Xanthe before posting their works.

SGA writer Lavvyan's earthside AU The Spaces Inside [11] draws from the prostitution trope and the hurt/comfort trope.

Xanthe herself has expanded her Coming Home universe in 2008 with a sequel to General & Doctor Sheppard that features a crossover between Stargate: Atlantis and NCIS with a focus on Gibbs/DiNozzo. The title is Hiding In Plain Sight.

In “Coming Home”, my exploration of the top’s perspective was a particular source of pleasure for me. Often in fanfic the sub is mixed-up and the top is stalwart, caring and steady – but I wanted both sub and top to have their own issues.

In “Coming Home”, I dealt with John being a top who had only played around with the role before he fell for Rodney. Then suddenly he had all these protective and sexual urges he was struggling to control. This was an interesting area of sexual psychology to explore and I loved it. In this story, John had a need for Rodney that was raw and all-consuming, and at times Rodney had to be the strong, calm one, to bring John down from his top headspace, which can be just as powerful a place as the sub’s headspace.

Seperis posted an essay on fanfiction as romance, where she listed Coming Home as one of her top two choices for escapist romance reading, along with thoughts on why fandom sometimes seems to dismiss or mock the romance genre in fanfiction.[15] Comments in the entry also explore the underrated genre and various opinions of the stories Seperis cited to illustrate a fanfiction romance.

The story was discussed alongside Take Clothes Off As Directed on The Cuttingboard.[16]