Dr. Rodney McKay (Ph.D., Ph.D.), Canadian astrophysicist and engineer of genius intelligence, is the head of science operations of Atlantis. He is also one of the members of Atlantis's first-contact team.

The character is played by actor David Hewlett. 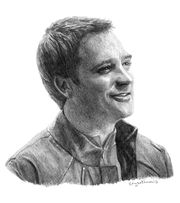 Drawing of Rodney McKay by crysothemis published in the Surfacing zine.

McKay is egotistical and brash. Early slurs on his bravery have been belied by his actions over and over again, but unlike the other, more stereotypically macho members of the expedition, McKay is honest and vocal about his fears and irritation in the face of danger and discomfort. Despite his fearfulness, he has shown himself to be courageous, willing to do what must be done despite his fear in the face of things like exploding super volcanoes, Superwraith, and a sinking Atlantis. McKay lacks a brain to mouth filter, which can cause problems for himself and others. Despite his self-proclaimed failings ("petty, arrogant and bad with people"[1]), McKay has earned the loyalty of not only his team members but many others on Atlantis, in part due to his loyalty, bravery, and willingness to put himself in danger to save Atlantis.

Other notes on McKay:

Two versions are most popular in fic:

Despite, or because of Rodney's personality, many fans have accused Rodney of being the SGA screenwriters' Marty Stu self-insert character. Writer and producer Martin Gero has stated outright that McKay is his favorite character,[2] and the writers often appear to "play favorites" when writing him, perhaps because they see themselves in certain aspects of Rodney.

Rodney's T-shirt collection is something that fans have grabbed onto and run with. In canon, Rodney is shown wearing an "I'm with Genius" T-shirt during the alien-induced hallucination of returning to Earth in the episode Home, and he wears a "Mr. Fantastic" T-shirt in the SG-1 episode Moebius. Fans have elaborated on these hints, with many stories portraying Rodney (or John) as having a large collection of sarcastic, geek-related, and/or fandom-related T-shirts.[3]

While Rodney states in several episodes that he is allergic to citrus (beginning with his aversion to lemon chicken in SG-1 episode 48 Hours), the extent of the allergy is never shown on screen.[4] Nevertheless, multiple fanfics use anaphylactic shock as a whump mechanism.[5] Rodney also insists he is hypoglycemic,[6] another detail that becomes the subject of many fics.[7]

Minions. Does this term occur in canon or only in fanon?

Fan response to McKay has been mixed. He is featured in various fan works as a layered character with obvious interest in his motivations and personality. Positive views tend to cast him in the light of a misunderstood man with hidden depths, while others see him negatively as nothing more than an arrogant genius.

In fanfiction, as in canon, Rodney McKay tends to be voluble, brash, and brave.

McKay is part of the most common slash pairing in the fandom, McKay/Sheppard, but the shipping does not end there: McKay/Zelenka, McKay/Carter, McKay/Weir, McKay/Teyla, McKay/Ronon, and McKay/Beckett are all ships with varying degrees of popularity. In the final season he became part of a canon pairing, McKay/Keller.

Some of the trends/tropes in McKay-centric fanfiction are as follows:

The Stargate SG-1 episode 48 Hours provides a piece of backstory about McKay's childhood ambition to be a concert pianist; his teacher told him that, although technically proficient, he lacked the artistry and soul to be truly great. Many stories use this detail: 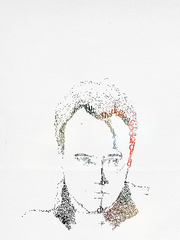 McKay fanart by aesc, cover for Rebuilding Babel. It consists of letters, which reflects McKay losing the ability to speak in words

Canon makes much of McKay's intelligence. He's a genius (and he knows it), and he talks fast because he has a lot to say. Fanfiction sometimes subverts these basic realities.

There are also stories in which McKay is unhinged, unwell, or mentally ill; Korilian maintains The Deranged Mckay Master List, a collection of links to stories where McKay is deranged, broken, or otherwise messed-up.

In the wake of Season Three's The Tao of Rodney, a wash of stories enhanced McKay's senses and abilities (The Fey by Oran). Fanwriters have also explored what happens if McKay's senses are taken away (The Paradox of Vision by Apple_Pi).

Non-AU fanfiction posits a variety of earthbound McKays working in academia. Synecdochic's Freedom's Just Another Word for Nothing Left To Lose, published in 2006, offered a glimpse into a Rodney whose life as an earthbound university professor is starkly defined by Atlantis and by what he's lost. On a happier note, Nymphaea1's When I'm Sixty-Four (2008) shows McKay and Sheppard living on Earth twelve years after the end of the Wraith Wars.

AU McKays are usually irascible and arrogant, but tempered with moments of kindness.

Some fans have argued that canonical McKay is effectively occupying a stereotypically female role anyway: he's the scientist/intellectual on a team of warriors (which Others him in interesting ways), and there's John's infamous reference to Rodney's comfort eating[8] Not to mention that his true given name is Meredith.

This reading of the character, and the prevalence of genderswap in SGA fandom, may explain why McKay gets turned into a woman pretty often in fanfic (Only Grumpier and With Darker Hair, by Lenore, Stand-in by lamardeuse, Doctor Meredith by Ellex).

Some other fans see Rodney as having several stereotypically masculine traits (for example his passion for hard science, a historically male-dominated field, and his awkwardness dealing with emotions, a skill someone gendered female would be expected to develop), and may be interested in genderswap to explore how Rodney deals with people's reactions to the way those traits directly defy gender role expectations for women. Sometimes Rodney is seen as transgender; as having been born a female Meredith but having become a male Rodney instead (see, for instance, Life (Sometimes It Washes Over Me) by kyuuketsukirui.)

Of course, Rodney has also canonically genderfucked: he was forced to share his body with Lt. Laura Cadman in the episode Duet.

Rodney has been transformed into a penguin (many stories), a dolphin, a baby dinosaur, a dragon, an ice cube, a girl scout cookie (specifically, a Samoa), a cat, a squirrel, etc. He has been portrayed as an alien being (An Aesthetic Solitary Thing by eliade). Fans made Rodney into a hologram well before canon did in episode The Last Man.

The Post-Trinity phenomenon: Love it or hate it, iibnf has been maintaining a list of post-Trinity fic for those who can't get enough of Rodney being shunned and kicked around. This post also coined the phrase Lemon Chicken:

Normally, in a classic Post-Trinity fic, John Sheppard (sometimes the entirety of Atlantis) cannot forgive Rodney for making a mistake, and proceeds to punish him, usually by shunning. A lot of shunning. Oftimes Rodney may also be served lemon chicken in the mess, his work may be sabotaged, people will be mean to him, generally his life is made more unpleasant. Poor woobie.[9]

Most of the classic post-trinity stories focus on the other characters - with a special focus for John - learning how difficult their life would be without Rodney in it.

Not exactly grovelfic, but possibly-related, Korilian maintains a Rodney's Miserable Childhood Masterlist, collecting links to stories in which McKay was abused or mistreated as a child.

Another popular Rodney-whumping trope: anaphylaxis fics. Due to his (possible? canon and/or fanon) severe citrus allergy, stories in which Rodney has an allergic reaction and nearly dies are common.

On a related note, Rodney's potential hypoglycemia is another popular way of having him pass out or become suddenly ill in fanfic.