Grovelfic (or grovel!fic) is a type of fanfic in which character A realizes that they have treated character B unfairly or not appreciated them enough, and "reforms" or apologizes profusely (i.e. "grovels"), usually because the author favors character B and sides strongly with their viewpoint in conflicts or events that happened in canon. It is often a fix-it story for a particular episode, but can also grow out of a more long term dissatisfaction with character dynamics in canon. 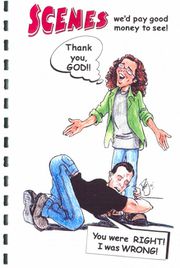 Sentinel fanart by PeeJ in Missing Links #2, featuring Blair Sandburg and Jim Ellison -- "You were RIGHT! I was WRONG!"

Grovelfic is usually not a self-applied label, but used by others who feel the characters are mischaracterized in a story.

Grovelfic is very closely related to apologyfic. Another related genre is the accusation fic. However, these genres are more concerned with seeing a hated character punished for their misdeeds than with obtaining justice for the favorite.

Grovel!fic: Stories wherein a writer seeks to resolve a canonical confrontation by having one character take excessive, sometimes erroneous, responsibility for the conflict and seek reconciliation by conveying this complete acceptance to the other character in extremely self-deprecating, i.e. groveling, ways. Basically, they don't just apologize, they are put through hell and must beg for it first.

The essay pointed to three sets of slash couples upon whom these tropes mainly centre: Duncan/Methos from Highlander, Blake/Avon from Blake's 7, and Jim/Blair from The Sentinel. Sabotini wrote that these particular pairings are examples of a "hero/sidekick" relationship dynamic, which has an "ambiguous set of power dynamics".

In the hero/sidekick genre, the sidekick serves as the foil for the main character. It is their job to be kidnapped and placed in danger, to be made vulnerable, so that hero can be concerned for them. Thus, events happen to these passive characters; they are not usually the ones who solve the crime or run the ship. The main character is traditionally the active one; he fights the bad guys and saves the town from destruction; it's part of the job description.

Sabotini explained that this active/passive relationship dynamic persisted and was even exaggerated by fans in fanfiction, even "while the fans cry out against it". Fans exaggerated the "masculine" traits of the active character and "feminine" traits of the passive character, leading to a wildly disproportionate power imbalance between the two. These fannish headcanons and characterizations then coloured fans' interpretations of certain events in canon:

Each of the three couples I mentioned -- Duncan and Methos, Blake and Avon, and Jim and Blair -- deals with the issue of betrayal and what their partnership means at some point during the run of their series. [...] But for many fans, when the betrayal episode is rewatched, the fanfic-created characterizations are jumbled in with the canon of the show, creating fan fiction where the 'stupid, brutish husband' has somehow manipulated, coerced, and controlled the 'clever, victimish wife', ruining his life. Or in other words, the active partner betrayed the passive one, no matter what was actually shown on-screen, because those roles are supported by hundreds of stories written by fans.

This then necessitates the creation of grovelfic by fan writers in order to redress the power imbalance:

In fan fiction, the only acceptable option seems to be that the active partners betray the passive one, otherwise the roles that the fans have developed are somehow invalidated, which is an untenable situation. Still, no fanfic author wants 'her guy' to just accept such betrayal, particularly when 'her guy' is often the 'wife' in the relationship, and so the need to support and protect the passive character jerks into place. A huge new category of fan fiction joins the usual mix of episode-based and generic first-time stories. These new stories center around getting the active character, the hero, to apologize for his betrayal, or to grovel and plead for the relationship on bended knee, thus redressing the power imbalance that the active/passive roles require. This influx of apology!fic and grovel!fic seems to take over the fandom, consuming all the authors' resources in an attempt to rebalance the perceived power imbalance.

Over time, "Grovel!fic" dropped the ! to be written simply as "grovel fic" or "grovelfic". The term seems to have been popular in 2000s LiveJournal and Dreamwidth fan circles, but has seen little to no usage on Tumblr.[1]

In a 2003 LiveJournal post, LJ user seperis made some comments on a meta essay by Smallville fan Liviapenn, entitled, 'Quit Fucking With Lex! The Grovelfic Rant'. While the original essay is sadly not publicly available, seperis uses it as a basis to muse about characterization in grovelfic, and how grovelfic is (to them) the "PWP of pain".

One of the things that struck me while I was answering some comments was that, while grovelfic annoys me, when I'm not in the right mood for it, I tend to be a lot more annoyed by other kinds of fic to a far greater degree when the characterization is off, which makes me think that a lot could be that readers expectations are coming into a sharp collision with writer intent.

Or basically, readers need to know what they're looking at.

To me, grovelfic is basically the PWP of pain in some instances. Like writing a single sex scene for a fic, or writing a introspective character study, it is a genre all on it's own and can't be judged by the standards of another genre entirely. The demarcation line is blurry sometimes--or a lot, actually--but that holds true for most stories.

You don't open a PWP and expect great character. You open and read it because Clark and Lex (Clark and Chloe, Lex and Chloe, Clark and Whitney, Lex and Whitney, you see a pattern?) are nailing each other and that's what you want to see. Characterizations or other factors can take it from simple PWP kink to a story you might love and treasure, or one that surpasses genre, but that's a different field of kryptonite altogether. I'm perfectly willing to admit I indulge my PWP tendencies with a great deal of frequency, because dammit, they dont' get it on screen and it's my duty to make sure they get it off. Um. Off-SCREEN, that is.

But again, this is kind of something I had to work out for myself in how I choose to read. I'm a compartmentalizer by nature. I can read a fic where Clark is merrily tortured in an underground lab by a truly psychotic Lex Luthor involving pliers and kryptonite saws and enjoy it for what it is--nice, cathartic grovelfic/torturefic/yougettheideahere. I don't expect it to be something it's not and I either like or hate it knowing what its limits are.

Maybe we need to give it an official genre like the PWP. The CGF (cathartic grovel fic)? Er, no. Sounds like a branch of the government.[2]

In 2014, a user submitted a rant to the Fandom Secrets Dreamwidth blog about their dislike of grovelfic (using the Sentinel fanart by PeeJ featuring Jim and Blair as a backdrop), which read as follows:

I hate grovelfic. Even when the groveler totally deserves it, it usually has a tone that sounds like it's written by some resentful dweeb projecting themselves into the grovelee's shoes in order to feel vindicated for some RL slight. Failing that, it sounds like an OOC play-nice screed from an overzealous mod.[3]

In a discussion thread below the post, some commenters agreed with the OP, likening grovelfic to character-bashing or self-inserts, whereas others maintained that they enjoyed it, or that it was appropriate depending on the canon source material.

...Which has never stopped me from writing it in my head whenever I'm pissed at a certain character. (Or when I'm pissed at a fanfic, and I imagine what would happen if the shat-upon character in the fic managed to get everyone to feel sorry for their actions and grovel).

In my defense, I've never actually typed it up or posted it, and I know it's OOC and kind of shit?

cloud_riven: I can't do grovel fic at all, or character-bashing for about the same reasons. Same with those nerd self-insert ones, where the hot girl is begging for forgiveness after shunning the nerd, and he righteously rejects her back. It's like those fantasies you play in your own head after a bad day, and you go over and come up all the ways you could have oooh so gotten them good if you just said or did that one cool thing you just came up with. I don't wanna see that penned out.

Anonymous: Oh I don't know. It depends, IMO. Like, bring me aaaaalllll the Holmes-grovels-to-Watson-after-the-dying-detective-stunt fics, but fuck off to all the all-the-avengers-grovel-to-each-other-over-each-bit-of-dickery they-did-before-the-battle fics.

iggy: I'll always associate grovel fic with Hetalia and how people would take out their frustrations on the US government by writing it with America. It always made me massively uncomfortable and irritated. His character is not synonymous with the government.

Anonymous: Actually I like grovel fic. It should have a right character being a slighted party and it shouldn't be too grovely. What can I say, it's self-indulgent. Kudos to the writers who post a good grovel!fic.