Duncan/Methos is the pairing of Duncan 'Mac' MacLeod and Methos in Highlander.

Highlander started out a gen fandom. (And by gen, that means "a lot of stories with original character Mary Sues, usually immortal.") Although the show gave us many pretty men to pair with Duncan, virtually all of them were only in one episode (and many of them finished the episode dead.) Duncan/Connor, Duncan/Darius and Duncan/Richie each produced a small following, but no slash relationship really took off. (This was possibly due to his canonical relationship with Tessa being such a huge focus of the first two seasons of the show, up to and after her death.) It was 3rd season before Methos even appeared, and even then, although a few writers (including, notably, Kellie Matthews) began writing Duncan/Methos early in 4th season, the pairing did not really take off until later.

Kellie Matthews and Julia Kosatka wrote the In The Dark series, an X-Files/Highlander/ST-TNG crossover that had Duncan MacLeod and Guinan becoming lovers. There were three stories in the set (In the Dark, Into the Light, and Daybreak) The second story of the set brings in Methos, who had just made his first appearance on Highlander, and it becomes a threesome (Methos/Duncan/Guinan), while the third story focused exclusively on the Duncan/Methos relationship and on tying up loose ends from the prior story. That third story Daybreak might have been the first Duncan/Methos story on the net. Kellie then went on to write The Firebird Suite, which brought in a lot of fans to the Duncan/Methos pairing.

Effect of the Horsemen arc

But it was the season 5 plot twist of the Horsemen arc that really cemented the pairing. With the 4th season finale, both Duncan and Methos are disillusioned and bitter; Methos disappears for awhile, and it is believed that he stops using the 'Adam Pierson' persona at this time. That characterization shift was extended in early season five, and Methos went from the irascible, snarky, fun-loving Adam Pierson of early season four, to a more intense, determined, judgmental Mentor-type character. So when "Comes A Horseman" showed, revealing Methos' history as both a rapist and Death, a member of the four Horsemen, it was believable and resonated throughout the fandom.

Highlander had canonical partner betrayal, and neither man died. It also created an environment that encouraged serious fannish contention. There was a reason that Highlander fandom was called "the mean fandom".

By this point, there were many HL fans who considered themselves only fans of Methos, and not the star of the show, Duncan. This was a normal phenomenon, of course. But Kirkies and Spockies, or Bodie fans and Doylies in Pros were both watching the same show. Methos fans generally only watched the episodes he was in (roughly 20 out of 100 eps.) This gave them a different take on Duncan's character, that the Duncan fans thought was invalid, since it wasn't based on all of the aired source. This led to constant battles over story characterization between the two groups. 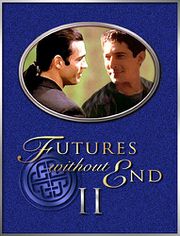 cover of the zine, Futures Without End #2

A theme in much D/M fiction was resolving what some fans perceived as Duncan's condemnation of Methos' acts as a horseman. Many fans felt that Duncan had no right to pass judgement on Methos, and that holding someone responsible for acts of four thousand years past was excessive. Some fans attempted to justify Methos' history, portraying him as an unwilling participant, or forced to it reluctantly in the service of a greater good. This led to significant Hero Bashing in the fandom, including vast amounts of Duncan grovelfic. (Possibly as a reaction to the over-the-top seriousness, not to mention violence and gore, of these stories, stories like Hokey-Pokey by Araminta Carrington appeared with equally over-the-top silliness.)

The situation polarized even more with the episode The Modern Prometheus, as some fans felt Duncan was a judgemental jerk for killing off Byron, who was clearly Methos' old lover, and he only did it out of jealousy; other fans felt that since Byron was an unrepentant serial killer--seducing talented mortal musicians and beguiling them until they had no will of their own, and then getting them to kill themselves--that Duncan was justified in offing him, even if there was some jealousy involved. (Still other fans felt that Byron wanted to die, and he was setting the whole thing up just to get Duncan to kill him.)

Responsefic like The Apology[1]by Rachael Sabotini and Luminosity's vid I'm Not A Virgin Anymore appeared, the Duncansluts mailing list formed, and The Standard Duncan Defense Letter was created.

pat_t wrote The Highlander and the Really Old Guy for ship_manifesto in September 2004.

Two of the major artists creating D/M fanart were eng and The Theban Band. Like many other fandoms of the time, the majority of art being created was specifically created for use in zines.

D/M vids tend to address their friendship, their love, and/or their struggles to remain together despite the various obstacles in their path. Some vidders of this pairing include:

Futures Without End[2] was originally released as print zine in four separate volumes before becoming available on the Internet.

Archives for D/M fic were largely the same as the general fandom, with some specialized archives developing in conjunction with mailing lists.

Although a good portion of the fannish interaction was on the main lists, D/M fans found homes on the following lists: