The Media Cannibals were a vidding collective active from 1992 to 2001 [1] , based primarily in Seattle, Washington. They produced five tape collections. They vidded in many fandoms (initially, The Professionals, Wiseguy, RPS for Led Zeppelin, and Due South; later adding Highlander, The X-Files, The Sentinel and others). They were also known for multimedia vids -- both garbage can vids, and vids that did a compare and contrast between two or three fandoms in one song.

cover of their 5th songtape collection

They also published the zine Guilty Pleasures. From that zine: "So, like, who are these people? The Media Cannibals are a loose-knit group of people who live in the Seattle area who like to do fannish things collectively. Spearcarrying Cannibals visit often from other parts of the country."

The Media Cannibals define themselves as a semi-autonomous Media Fan Collective, bound together by a shared appreciation for cruelty. Most of the members live somewhere in the Pacific Northwest. [2]

Some say they were the Beatles of their vidding generation.[3]

They regularly collected their work into tapes and kept those vid collections advertized and "in print" at a time when songtapes were hard to find. They made RPS vids (for Led Zeppelin) when they were uncommon ('95-96). They were instrumental in starting the vidding review process at Escapade and ZebraCon and were important players in the creation of the Escapade vidding aesthetic. The Media Cannibals were also noted for advancing VCR editing technique (for instance, using very fast cuts or short edits at a time when most vidders used very long "talky-face" clips) and cutting edge music and thematic choices.

1999 ad from DIAL #11, "The Media Cannibals will be well known to many of you as producers of some of the finest, wittiest, most poignant songvids being made at the moment." [9]

Sandy and rache learned vidding from Deejay in 1992. Their first vid was a song Deejay had chosen for The Professionals called Don't Put it in Your Mouth, that appeared on Deejay's third tape collection. They gradually recruited all of the other Media Cannibals to work on vids with them. In the first years, Sandy owned the only VCR with editing features, so she tended to be the one actually pushing buttons, regardless of whose idea each vid was.

Two of the VHS tapes used to distribute their vids. Unlike most vidders of the time, the Media Cannibals used labels and a logo on their tapes. Most vidders distributed their vids with handwritten labels.

In 1996-97, the Media Cannibals also wrote a zine together, Guilty Pleasures. The "profits" from the zine went to buying another editing VCR, so that it could travel from house to house, making it easier for people in the collective to vid by themselves. Finally, computer editing meant that vidding was more difficult to do in a large group. When the Media Cannibals dissolved as a vidding collective, Sandy and rache went on to vid as Clucking Belles (website), while Jo and Gwyn vidded both individually and as L'Abattoir (website). Attempts and discussion of ways to get the band back together and vid as a group on a computer system are ongoing. 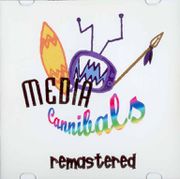 DVD cover of their remastered vids

Many of their original vids have been remastered with DVD footage: Justacat and Gwyneth have recut many of the Media Cannibals' Professionals vids; Killa recut many of their Highlander vids; Gwyn has redone DS, BtVS, XF, and multimedia vids, and probably more will come as more old shows appear on DVD. For information on obtaining a DVD of the remastered Cannibals vids, info is available at Gwyn's website.

In 2012, par avion collected feedback on both the Clucking Belles and the Media Cannibals vids here.[10]

"I ask that people get them from us and not re-copy them - because the quality drops so fast on video - but I'm not manic about it. Feel free to copy for friends, and then if they want a higher quality copy, give them our address." [11]