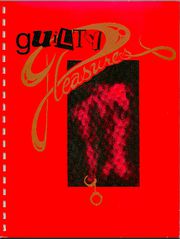 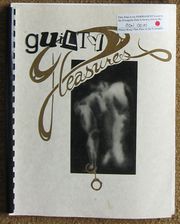 The Story Behind Guilty Pleasures

At one get-together of some of the people in the Media Cannibals group, the concept arose of "an individual's own kink." These are the one or more situations in which each of us loves to read something so much we'll forgive almost anything in terms of writing quality. In a group of fen who care a great deal for writing quality, everyone owned up to having a pile of dubious-quality stories they'd never let go of, because they hit our particular kink(s). We were unanimous -- it was a shame that so rarely was one's kink written really well.

Sometime after this revelation (which explains an awful lot about fan opinion) several of us revisited this topic while eating pizza at the spaghetti house across the road from the Escapade hotel. Should writers try to write their own kinks? Some of us had tried and found it was rarely successful. But wouldn't it be fun if we all tried it . . . together? The question loomed before us: What if we put out a zine, not just of our kinks, not just of the kinks we were embarrassed by (our guilty pleasures), but of our well-written guilty pleasures? Could we rise to the challenge? It was as though Mickey and Judy stood before us: Hey, kids, let's put out a zine!

The most important rule was quality. But since these were "kink" stories, how could we guarantee objectivity in an edit if the editor shared the kink? And so the editing decree was written: There will be two editors, one of that kink and one not of that kink.

And then we agreed that because the point was for all of us to contribute, and the group had so many new writers, we'd take any contribution if the writer agreed to keep working on it.

That was two years and many, many deadlines ago. Acquiring one new story per deadline, we patiently encouraged and edited each other, and came up with an unusual and diverse, but we hope enjoyable, zine. -- Blackbird

This zine includes: Girls, girls with boys and girls, H/C, SM, press-ganged flogging victims, AUs, crossovers and death. No elves. No teddy bears... The stories in this zine are based on characters created by someone else. But no infringement of copyright is inferred, and we are not stealing them... All stories with in are the property of the authors. Please do not make copies, post electronically (e-mail, Internet, WWW) or anything else slightly unsavory while this zine is in print. This zine will remain in print for one year (until Feb '98).

The Table of Contents

Summaries from the flyer.

See reactions and reviews for If Memory Serves.

See reactions and reviews for Two Birds, No Stone.

See reactions and reviews for Rum, Sodomy and the Lash.

See reactions and reviews for Girls Just Wanna to Have Fun.

See reactions and reviews for The Prisoner.

See reactions and reviews for And Learn to Fly.

See reactions and reviews for These Things Do Not Remember You.

[zine]: I sat down and started with one of the American ones, called Guilty Pleasures because (from the editorial) it seemed that these were the writers' stories based on the kinks they wanted to write about and I love kink. I only recognised one of the authors so I have no idea if the others are new authors, new to Pros or just using new pseudonyms. Well if this is their idea of kink it is very different from my definition of it There was one story called "And Learn to Fly" which had some light b/d (bondage and domination, not Bodie and Doyle); I enjoyed it but being honest, it was about the only one. The Alex T Mackenzie story (the only author I knew) wasn't one of her best, although it was the second-best story in the zine, but the others ranged from yet another death story, through one where Doyle spends the night with a gay female couple, to one where (Drugs Squad) Doyle ends up in the Village (you need to have seen the series The Prisoner to understand this) and meets a Bodie there. Being disappointed with this zine - are my standards too high? [2]

[zine]: I liked the premise of this zine: a Professionals zine in which each author wrote to address their favourite kink, the way they wanted to see it done. I like the notion of giving authors such free rein to do what they like, especially since the editors clearly kept to fairly high standards of expression - nothing here is a pointless wallow. Add this to obviously careful and stringent editorial care and it produced just the kind of zine I like to read, with variety and high entertainment value.

The best stories in the zine were These Things Do Not Remember You', Two Birds, No Stone* and 'Girls Just Wanna Have Fun', with a special mention for 'Catching Flies', which was a strong, moving and depressing story. I was surprised at how much I enjoyed Two Birds, No Stone' and "Girls Just Wanna Have Fun" because I didn't think I liked slash stories with extraneous women in them - perhaps I'm mellowing, or not as fussy as I thought, but I really think the charm of these stories is that the het sex was so well written; and in each case it was part of the slash story, not an imposition on it. Even more important, the women didn't sound like Mary-Sues; they were interesting and strong characters who seemed suitable parallels to Bodie and Doyle themselves - no mean feat, I should think. Another word of commendation should go to the Media Cannibals because of the high technical quality of the zine: well written, with few typos and a high degree of grammatical skill and vocabulary. There was only one story which made me blink over the grammar and sentence-structure a few times, and in no way did it detract from the story. [3]