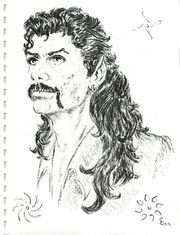 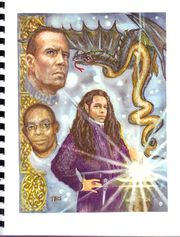 In Dragons and Kings, Blair Sandburg is an elf prince in Cascade. Jim Ellison learns the truth, and overcomes his own resistance to help Blair deal with problems in Cascade and the elf kingdom.

Elf AUs are a type of alternate universe in which one or more canon characters is an elf. A variety of different fanworks have incorporated Elf AUs, including fanart and fanfiction. Elf AUs can appear in fanworks for both fantasy and non-fantasy universes. Elf AUs have been used both for serious fantasy and parody works.

In source materials that already feature fantasy or supernatural elements, an Elf AU may incorporate an identity reveal. These works often feature a character who has concealed their true nature and is, in fact, an elf. There are also works where a character is unaware of their elven heritage. In Elf AUs that feature slash pairings, often the shorter/thinner half of a popular pairing is an Elf, and they must reveal to their love interest that they are an elf.

Elf AUs are often an opportunity for Hair Fandom, which celebrates characters having long hair.

Fantasy AUs that don't include elves may be referred to as Magic AUs, though Elf AUs may also be considered a subgenre of Magic AUs.

I disagree that First Wave fans want only want stories that extend the series--if you mean to the exclusion of anything else. On the other had, I could accept a definition that a First Wave story would have to be set within the boundaries of the series. The point I made in the earlier Email was that as First Wavers are usually interested in the characters in the context of the show, and that for them, that is the natural place to start exploring the characters. Once they have done that, they may very well go looking for a new context such as an alternate universe. But they want to be true to the characters as they perceive them to be, or, in an AU, to make some change that further illuminates them in some way (as I did with my Spock who was raised as a human). By the time you get to the Fourth (Fifth?) Wave approach seems to be more, "Gee those guys are cute, I wonder what they'd look like with elf ears?" [1]

I personally find it a lot easier to read mediocre stories that are non-AU, simply because I only have to tolerate poor characterization and poor plot, without having to *additionally* put up with poorly-done archaic dialog, poorly-researched historical details, or poorly-depicted elves. [2]

I do believe I'll pass on the Doyle as an elf type stories. I've never found Blair Sandburg as an elf entertaining, so I doubt I'd find Doyle as one my cup of tea either. [3]

Ray Doyle from The Professionals, has been a popular, and seminal, elf AU subject.

The earliest media elf AU story is El'Endu'il. It is a Professionals fic that was published in zine form in 1983, but circulated privately for a number of years before that date. Another very early Doyle-as-elf story is the Descent to Humanity, a 1980s circuit story series by Anne Carr.

Ray Doyle also co-stars in of the most famous early elf AUs from the mid-1980s: The Hunting by Jane of Australia, a multi-volume zine epic that cast Ray as a captured elf and Bodie as a human who frees him; they run away together and have five zines' worth of adventures.

Epic elf AUs have a tradition in online fandoms as well.

The Magnificent Quest is a Magnificent Seven AU that has Vin as a half-elf who discovers the true meaning of his heritage when he and his friends are on a quest to warn the king of an evil that threatens the kingdom. In the Magnificent Seven Kings and Vagabonds [4] series it's Mary Travis who is an elf.

Popslash had Talliswood[5] where both JC and Lance are elves and find their true love with Justin and Chris while saving the magic of the realm. The story was originally inspired by Helen's Guerillas series, but ultimately went in a very different direction.

In Stargate SG-1 fandom Serpent in the Shadows[6] shows Sam Carter as an elf.

The Crown of the Summer Court in Merlin fandom follows the tradition of high fantasy elves (in a fusion with the Merry Gentry series of books) and shows Merlin as a half-elven prince with Arthur as his champion and future king.

In The Sentinel fandom, Natalie L combines elves with mpreg in her epic-length Soul-Quest series, first published in the My Mongoose e-zine and then later as a print zine.[7]

There are also Elf AUs that don't use high fantasy elves. For example, the SGA story A Wish For Wings[8] by Caro has John Sheppard as one of Santa's elves who ran away to escape the exploitation of toy production.