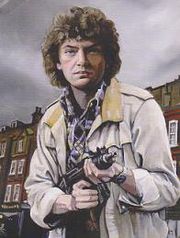 back cover of Exile, Lorraine Brevig

Ray Doyle is a character from The Professionals. He is an CI5 agent, partnered with William Bodie.

Common fanon and tropes in fanworks and discussion.

The main pairing is with William Bodie. See Bodie/Doyle.

Doyle has been a popular, and seminal, elf AU subject.

The earliest media elf AU story is El'Endu'il. It is a Professionals fic that was published in zine form in 1983, but circulated privately for a number of years before that date. Another very early Doyle-as-elf story is the Descent to Humanity, a 1980s circuit story series by Anne Carr.

Ray Doyle also co-stars in of the most famous early elf AUs from the mid-1980s: The Hunting by Jane of Australia, a multi-volume zine epic that cast Ray as a captured elf and Bodie as a human who frees him; they run away together and have five zines' worth of adventures.

The Feminization of Doyle

Some fans enjoy the characterization of Ray Doyle as the more "feminine" of the duo. Others, not so much -- one common complaint is that Doyle is often portrayed as fragile and needy.

One fan in 1987 writes: "I am becoming increasingly aggravated by the portrayal of Doyle as childlike, female, fragile, too beautiful for his own good. I'm guilty in that I cannot depict him in my writing.as the tough man I see him to be in the series, but I hope I haven't yet turned him into the equivalent of a Barbara Cartland heroine. I certainly don't recognise the waiflike creature who is loaded down with jewellery and weeps every five minutes and who is into organic food/vegetarianism that I keep reading about. I agree ... Bodie is tough, probably tougher than Doyle in terms of physical strength but Doyle is the dominant half of the partnership. When it comes to character, he can run rings round his partner." [1]

From 1997: "It's not necessarily A/U stories that girlify Doyle. There are more than enough CIS-based stories that have Doyle as a fragile flower who weeps down big butch Bodie's shirt front at the slightest opportunity. I don't recognise that view of Doyle at all." [2]

In 1998: "...I cannot understand the feminisation of characters. Why do writers do that? Is it because they identify most strongly with that character and, being female, see him as feminine also? Or maybe they really fancy the other half of the partnership and feel they are wasted on a 'real' man? Maybe they're ashamed of their liking for slash so they .. er .. hetero-ize it? You ask how the individual is chosen. I think the character to be feminised is the smaller of the two - simple as that. Daft, really." [3]

Another view in 1998: "[The feminization]... by which I mean writers creating 'nice' versions of Bodie and Doyle, The two men talk, think, and behave in ways that women do, perhaps because the writers (invariably women) are putting their own attitudes into their characters. Such writers seem unable to get beyond this to present the characters in a way that is masculine but will still appeal to a feminine readership." [4]

From a fan in 2002: "...the switching of the difference in their ages in fanfic)... there goes another of my personal alarm bells. This happens a lot in fanfic, but it always seems to be an excuse to wussify Doyle. Make him younger, "androgynous" and (if the reader is particularly unlucky) "slighter" but "feisty" and the next thing you know he's being called "kitten". [5]

Stories Featuring Doyle in Crossovers to Other Fandoms

When Doyle crosses over to meet characters from another fandom, he's usually in the company of Bodie, and quite often the two men meet other crime fighters like themselves.

One unusual series of stories, the Quanta Leap series by Jane Mailander, featured Bodie and Doyle as time travelers who shifted involuntarily between fairy tales, novels, and the future with each installment. She based the series on the television series Quantum Leap, but none of the characters from that show appeared in her fanworks.

In one particularly unusual crossover, Doyle met himself (or rather, another incarnation of Martin Shaw) at the end of a story in which Don DeMarco became Bodie's lover. [9]

If Doyle is by himself in a crossover, he's less likely to meet Lewis Collins in one of his alternate roles. Instead, Ray tends to meet:

If Ray Doyle lives to a ripe old age, he may end up gardening, painting, or lazing in the sun. Most stories that feature the "Older Lads" have Doyle and Bodie together in retirement. Here's an overview of the storylines that seem to recur for an older Doyle in these stories:

If CI5 exists, then Ray may be part of it as