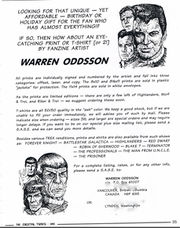 a 1994 flyer advertising his wares

Warren Oddsson was a well-known offline media artist in dozens of fandoms; he drew the covers for nearly a hundred zines, his art appeared in art shows at many cons, and he was the artist GOH (guest of honor) at several cons over the years and his work won him several awards Ex: 1998 and 2001 FanQ Awards as Best Gen Artist.

He died in 2001 at the age of 43. In his memory, a scholarship fund was created, to be awarded to a student in Fine Arts through the Icelandic Canadian Club. His family has set up a Memorial Page.; Wayback link

[2000]: Lois Balzer (also gen) puts out attractively formatted zines, but all the contents (both her stories and other people's) are on the 'net, for those to whom that matters. Warren Oddson is the house illustrator, and he is very talented, but only just moving beyond the stock-publicity-photo-floating-head type of illo. (When he does come up with something with a little composition to it, he is very pretty.) And he has trouble drawing Blair's hair -- puts me in mind of my favorite superhero character, Medusa, Mistress of the Living Locks. These illoes make me think: Blair, of the Ever-Expanding Hair. [1]

[His passing] breaks my heart. When I first got into SH, Warren's portraits of the boys were some of the first fannish things I was able to buy. I sleep every night in one of the t-shirts with his images of SH on them. Warren's work often had a wry sense of humor about it that was charming, like a portrait of Napoleon I remember that was so different from any others. And one of my favorites, a picture of Mulder and Scully in bed with shadows of Aliens behind them peeking in on them. This is just too cruel. We've all lost a treasure. [2]

A Matter of Honor| After the Battle| Below the Surface| Blood Agent| Buddies: A Collection of Media Art 1958-2001| Can You Get Channel D?| Chekov Uncovered| Classic | The Collection: Year One| Dancing| Dark Shadows Concordance| The Defector From Leningrad Affair| The Dutch Blitz Affair| Eyes Only| File 40| Generation D| Haunted Nights| In the Hands of Others| Knitted Souls| Kolya's Son| Legends of ShiKahr| Motet| My Brother's Keeper| The Northern Lights Affair| Observations on the Function of a Modern Sentinel| Passages| Reemergence: The MIA Affair| Second Chance| Second to None| Side-Trekked| Smarm| The Summer of '65 Affair| The Tiger Cage Affair| The Time Bomb Affair| Who Wants to Live Forever?| The Woman of Barzan| X-Posed