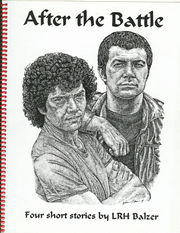 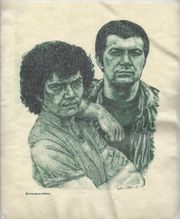 art on a T-shirt

After the Battle is a 100-page gen Professionals anthology. On the cover: "Four short stories by LRH Balzer". Warren Oddsson is the front cover artist.

About After the Battle

For this collection, Lois Balzer wrote the stories she wanted to see. Stories that dealt with the parts of the show she didn't see in the episodes. What happened afterwards? How did Bodie and Dolye deal with things that happened to them? How did their friendship affect their partnership? [2]

[Brothers in Arms]: Brothers in Arms and its companion piece In my Lifetime are as inseparable as the Bisto Kids themselves. They are one and the same story, told from Bodie's then Doyle's point of view. They took place at the beginning of their partnership and describe with subtlety, a keen sense of observation and a lot of tenderness for the characters how their relationship is slowly going to develop through the early misunderstandings, their mutual efforts and the plights of their everyday's work.[3]

[Three Men and a Bodie]: Most slash readers check out gen as well, and this one left a long-remembered image of a drugged Bodie running (you know how beautifully they run) through London while his fellow agents chase him.[4]

[Scissors]: This story shows the remarkable partnership Bodie and Doyle have,it probably falls in the category of pre-slash.

Bodie has a couple of days off and Doyle is still on sick leave after a particularly nasty case where Doyle has been held hostage by a sadistic nutter.

Then Bodie gets a phone call, his still shell-shocked partner wanted to get a hair cut and something has triggered a memory in Doyle and he loses it. To help Doyle, Bodie has to find out what exactly happened to him.

The story is told in the present with Bodie trying to help Doyle and with flash backs of the terrible ordeal Doyle went through.

Bodie is prepared to do everything to help Doyle come to terms with what happened to him.[5]

[zine]: Strictly speaking this is probably not a slash zine, as there are no sex scenes in any of the stories. The relationship betwen Bodie and Doyle, however, is beautifully drawn and quite often reads as either a pre-slash or established relationship. For example, from Scissors:

"Bodie buried another fierce kiss in the scattered curls, this time for himself, then rested his cheek on top of Doyle's head, his own taut nerves relaxing in the trust of his sleeping partner... The claustophobic room was a quiet haven, for now cut off from the rest of their world. In a bit, they would have to go back out there and deal with the events that had happened, but for a moment, he could relax and enjoy the living, breathing aliveness of Doyle. Safe."

I thoroughly enjoyed this zine, it's nicely written and I was left feeling that I'd had a peek at the lads themselves.[6]

[zine]: I'm actually reccing a gen zine. Stand by for the four horsemen. No, really, it's a great read; four stories that focus on the guys and their relationship. There's a goodly portion of h/c (especially in the last story, which I found a bit tedious), but the characterizations are excellent, and she does a great job of including Cowley and other agents in interesting, believable ways. I particularly enjoyed the first two tales, which detail the development of "The Bisto Kids." [7]