This article is about the tv show, for other meanings see Dark Shadows (disambiguation). 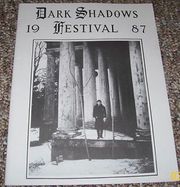 Dark Shadows was a daily horror soap on ABC from 1966 to 1971. It had over 1200 half-hour episodes. It followed the lives of the Collins family of Collinsworth, Maine and contained many supernatural and gothic elements, unlike most soaps. The series gained popularity, especially among younger viewers after the introduction of the character of Barnabas Collins, a vampire who became a breakout favorite. Toward the end of the series run two feature films House of Dark Shadows and Night of Dark Shadows, were made and released in 1970 and 1971 respectively. There also exists a remake as a primetime series from 1991, (which aired on NBC and was cancelled after one season due to losing to Gulf War coverage in the ratings) a failed pilot that The WB did not air in 2004 (but which was shown at several Dark Shadows Festivals) and a movie remake was made by Tim Burton and starring Johnny Depp but it was seen as more or less a parody and was not popular with fans of the original series. Several audio dramas were also made by Big Finish.

But beginning in the mid-1980s, there was a remarkable explosion of DS-oriented fiction, published in stand-alone formats by ambitious fanzine editors who wanted to provide a forum for the DS novels and novellas that were too long for their ‘zines. This glut of stories led to a kind of fanfic High Renaissance, ultimately affording a refreshing re-imagining of familiar characters. The foremost development in this wave of DS fanfic was the over-throw of the Victoria Winters-Maggie Evans-type ingénue in favor of the sophisticated, intelligent professional woman – well, in a word, Julia Hoffman. The re-drawing of Julia as the partner of Barnabas (intellectually as well as connubially) mirrored contemporary sensibilities about the sexes. Presenting her as sexually desirable, too, surely vindicated the aspirations of working women to be both an autonomous character in her own right and an object of desire. Now we could not only get the satisfaction of Julia’s unrequited love for Barnabas finally “-quited,” but even get occasional hints that Julia had a worthwhile existence apart from Barnabas. Julia’s rise in fanfic inescapably made clear that she had become a vehicle of self-validation for many fanfic writers and readers. [1]

In 1977, the first Dark Shadows convention, Shadowcon, was organized in San Diego as part of Starcon, a science fiction convention. In 1979 Shadowcon emerged as an independent gathering in Los Angeles, where it continued annually until 1986. Within a few years, the nature of the Shadowcon conventions began to expand and diversify by including all aspects of science fiction, fantasy, and horror.

"Dark Shadows Festival, founded in 1983, superseded the original Shadowcon gatherings. The first "fests" were held at San Jose, California, and Newark, New Jersey, in 1983. The latter included a trip to Lyndhurst, the mansion in Tarrytown, New York, that was used as Collinwood in the feature movies House of Dark Shadows and Night of Dark Shadows. The two films were then screened for those in attendance. The festival also featured a costume contest, now a regular feature of the annual program. The initial fests were followed by additional meetings in San Jose and in Dallas, Texas, after which they alternated between the Los Angeles and New York City areas. The tenth festival was held in New York and included a tour of New England locations used in the Dark Shadows series and films. It featured an appearance by Jonathan Frid (the original Barnabas Collins), who has attended 13 of the 16 fests held through 1993." [2]

Unlike other fandoms, fanvids were strongly discouraged in Dark Shadows fandom. While most professional conventions didn't show fanvids, almost every media fandom since Star Trek has maintained a robust, if somewhat underground, group of vidders who shared their songvids with other fans. However, as one fan explained:

"For some reason in that fandom, songvids were not only not encouraged, they were discouraged..... The [organizer] who ran the fests (to which the actors came)....would shut down anyone trying to sell VHS tapes of vids at the Dark Shadows conventions, and also any websites that would try and sell them online. Needless to say, since he ran the conventions, and controlled fan's access to all the stars, no one wanted to cross him, and so would voluntarily not make vids. Some people did anyway, and with the advent of the internet and youtube, it kind of exploded beyond his control anyway..."[3]

An example of one of the songtape collections that managed to escape into the wild can be found here and here. A small selection of fanvids online can be found here, and of course, a Youtube search reveals many more vids. An incomplete playlist of songvids and other fan made productions that were shown at the 2003 Dark Shadows Festival in New York can be found here.

Ironically, Dark Shadows fandom was one of the early participants in the making of fanvids. In July 1984 at the second annual Dark Shadows Festival in Newark, New Jersey: “A music video featuring relevant scenes from "Dark Shadows" set to such popular tunes: "Who Can It Be Now?", "You Can Do Magic", and “Memory (Theme From "Cats")", was prepared by Mary Overstreet, [Carol Maschke] and Kathleen Reynolds. Their tape was very entertaining and much enjoyed by all.”[4] At the July 1986 Dark Shadows festival in Dallas, Texas music videos produced by Dark Video and The Tower Room were also shown.[5] In 1992, MPI a commercial video production house announced plans to release two more "special tapes": a documentary on the "Dark Shadows Phenomenon" and something called "The 'Dark Shadows' Music Video." It is unclear if the tape was ever released.[6] However that year one fan wrote a letter of comment to MPI's "Behind The Scenes of Dark Shadows" Video: "The MPI Music Video was fantastic. My favorite is "At the Blue Whale" I love the way they're all getting down and boogeying. "Josette's Theme" and "Ode to Angelique" are running a close second.".[7]

At the 1993, Dark Shadows Festival: "convention-goers--watched videos on the big screen in the Westside Ballroom. Between star appearances. the fans watched 1840 episodes . 1841 Parallel Time episodes. DS music videos. fan-made videos, and bloopers from both series. .Especially outstanding was "Memories." Dave Brown's compilation of star clips from virtually all of the New Jersey, Texas, California. and New York Festivals since 1983."[9]