The World of Dark Shadows 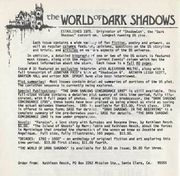 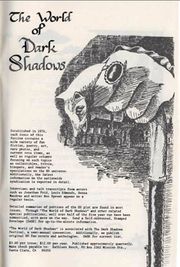 There are 88 regular issues, plus one special issue.

The first ten issues included a wallet-sized black and white publicity photo that was affixed to the editorial page.

Subpages for The World of Dark Shadows:

Off to a Bit of a Rough Start, and Some History

The editor had technical challenges and the publication dates and quality of print in her early issues reflected these challenges.

From the editorial in issue #8:

I know there have been one times when some of you thought I'd never make it. (I had the same feeling.) F'rinstance, that four month gap between #1 and the next issue -- which turned out to be #3. And how many other zines do you know of which has its second issue could out after its 7th? The least you can say is that I've done something unique. Then there was the illegible #3, wherein I learned cold turkey how to work this thing that I have that is passing itself off as a mimeograph machine, and the fact that mimeo ink can't be bought in Kingman for love or money…

When I started TWODS in September, 1975, I had no idea I would be doing a fanzine for this length of time. Most Dark Shadows fan clubs lasted less than ten issues, with the exception of Josette Kernaghan's "The Dark Shadows Official Fan Club", and Laura DeFalco Hedrington's "Best of Dark Shadows", both of which ran over 30 issues. I had no reason to think mine would be any different. DS had been off the air for several years, and there was absolutely no indication it would return in syndication. A few 'monster magazines', such as "Vampire Tales" and "Monsters of the Movies" had run retrospective articles on DS. Otherwise, interest in DS seemed dead.

It was because of the DS article in "Vampire Tales" that I discovered DS fandom at all. The magazine had a policy of running names and addresses in their Letters of Comment section, and I wrote to those people who mentioned DS in their letters. One of them, Richard Clark, wrote back and gave me names of people to contact regarding organized DS fandom. It was through these people - Jean Peacock (Graham) and Krista Conaway, among others, that 1 discovered that several fan clubs were still in existence, some of them dating from when DS was actually on the air. I was delighted. I joined them all. And most of them folded inside two or three issues of when I subscribed. I decided the only thing to do was do it for myself. I got mailing lists from several people, and sent out an ad for a new Dark Shadows fan club - "The World of Dark Shadows". The first issue was copied on a xerox machine by John DiBlasi Jr. on the East Coast, I had no access to any sort of copying or printing facilities in the small Arizona town where I lived. It was a total of 28 pages long, and went out to 38 people.

TWODS nearly died with the second issue. John DiBlasi was in a car accident - and was fortunately unhurt - but the masters were destroyed, and it had to be recreated from scratch. (This resulted in the second issue actually being mailed out at the same time as the 7th!) By this time, I had bought a hand-operated, cranky mimeograph machine, which is what issues 2 through 8 were printed on. The quality is better not described. With issue #9, and the assistance of Richard Robinson, then living in Arkansas, TWODS went to offset printing. I was then able to include photographs and pencil drawings in the issues. Readership steadily increased, as did page count. Easter weekend of 1976, I went to a Star Trek convention in Los Angeles - Equicon '76. There, Jean Peacock Graham and myself put up signs asking DS fans meet us in the lower lobby area to talk about DS. By this point in time, DS had returned in syndication in a few scattered places. Mainly shown were the first six B&W months. Unfortunately, these early, slow-moving episodes did not attract a wide audience, and most stations showing the program cancelled quickly. A very few - notably in Rochester, NY and San Francisco, CA - carried the package through to the end of the first year, but Worldvisior. Enterprises refused to release the second year without a certain number of stations committing to these episodes at: the same time. This didn't happen, and the syndication, once again, seemed dead. The Los Angeles station carrying DS, KHJ, had just dropped the series prior to Equicon, so interest in DS was still high. We got quite a few people at our impromptu meeting, including Marcy Robin, now known for both her DS stories and her publication ShadowGram (originally edited by Maria Barbosa), which features on current star news and activities. We had so much fun, we decided that it was time for a more formalized DS event. Jean Graham, at that time, was associated with Starcon, an umbrella convention featuring various fan groups, such as Logan's Run, Man From UNCLE, D&D, and more. The very first DS convention was held in conjunction with Starcon in September of 1977. TWODS continued to grow. New people continued to discover the zine all the time. I first published Janet Meehan's art in #11, and her work has continued to be a splendid part of the zine.

Eleven years ago, I would not have believed that I would still be running The world of Dark Shadows in 1987. Nor would I have believed that DS fandom would number in the thousands, or that almost every major star from the show would guest at a convention. The Dark Shadows Festivals, originated by Maria Barbos and now chaired by Jim Pierson, have been phenomenally successful, and show every promise of continuing to grow.

[from 1985]: TWODS has changed over the years. New and different stories are being used to explore things in DS that are not so well known. It is no longer the main characters vs. evil. There are small stoories that are gothic with very little horror. The above is good in that change and growth are good. I miss some of the horror. It seems that there was more of it in the earlier issues. I like the cartoons and the pictures in TWODS. Some of the nonfiction is very good. The ads have been very helpful. I used them to collect all the DS books. (Only the earliest DS books were as good as the ones written by fans) . Bringing light into Dark Shadows can be a joy. [1]

[from 1985]: A suggestion for the zine. All of the stories I've read have WASP characters, no minorities , no physically or disabled people (unless you count being a werewolf, witch or warlock as a handicap). Also, there aren't many stories that deal with the holidays, i.e. New Yearts, 4th of July, Thanksgiving. Even those holidays come to Collinsport. And authors might consider an historical event as a backdrop (modern or ancient). [2]

[from 2013]: Way back when I was a wee young thing, I saved up my allowance and ordered an issue of The World of Dark Shadows (57/58, incidentally, the one with Ben Cross in front of Jonathan Frid's Barnabas portrait), and was, the day it arrived, swept up into the arms of fandom. Kathy Resch, the editor of TWODS, also published what she called "concordances," illustrated, in-depth episode guides for nearly every storyline on the series (excluding the first year and the intro of Barnabas, and, as far as I know, the second half of 1897). Eventually I ordered the 1968 Vol. 1 Concordance, and started to collect the rest as I went. [3] 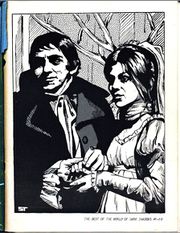 front cover of "The Best of Dark Shadows" -- Scott Taylor 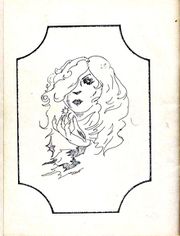 back cover of "The Best of Dark Shadows" -- Melody Frame

From an ad in Fesarius #5: "The very best in fiction, art, poetry, nonfiction and everything else from Kathy Resch's classic fanzine in DARK SHADOWS fandom. Collected from the first ten of over twenty issues in all, many of which are now out of print, THE BEST OF THE WORLD OF DARK SHADOWS features fiction by [Kathy Resch], John Peacock, Marcy Robin and Jeff Thompson, poetry by [Kathy Resch] and Dee Gurnett, humor by Rebecca Ross, Daniele Collins and John Peacock, nonfiction by Valerie Hall, Scott Taylor, Clyde Sisk Jr., Susan Houck, Pamela Pesiston, all new artwork by Barb Fister-Liltz and much more, including bloopers, puzzles, reviews, portfolio of early covers and the Collins family tree!"