A Matter of Honor

A Matter of Honor is a gen Star Trek: TNG anthology. 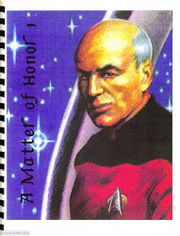 A Matter of Honor 1 was published in 1992 and has 160 pages. Front cover is by Adrian Morgan and back cover is by Marty Siegrist. 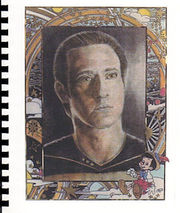 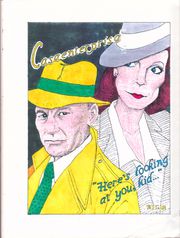 back cover of issue #2, Teegar 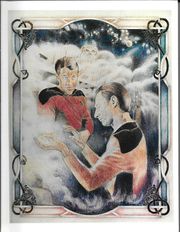 Matter of Honor 3, a ST:TNG anthology, contains a dozen or so stories, a handful of poetry, and a few illustrations. There is a nice balance of character-based stories. This is not a zine dedicated to any one character, despite the fact that Data appears on both the front and back covers. Now, I'm going to be perfectly honest here and admit that I actually bought this zine because of the cover. I happen to be a complete Data nut, and any zine that features the ever-welcome sight of my favorite 'droid is sure to grab my attention. A Marty Siegrist color cover is even more likely to do so.

As far as presentation goes, the interior is unfortunately lacking in artwork. There are two or three very attractive pencil drawings of Picard as Dixon Hill and as Locutus, and several cute 'toons by Nola Frame-Gray and Laura Miles, but that's about it. If you seek a zine with art in mind, find something else. But if pictures are not your priority, then have a read! This zine has a simple, solid-text layout, small type, and no huge spaces between paragraphs. At nearly two hundred pages, you are getting your money's worth of reading material. The only problem as far as that goes is an occasionally sloppy editing job. Sometimes words are missing or disjointed (i.e. 'doe she,' instead of 'does he'), and, in one story, I was distracted by several instances of the incorrect use of pronouns when describing an action sequence between a man and a woman. It got very irritating having to go back and decide who was doing what.

Now, on to the stories themselves. The first, and in my opinion, the best, is a Dixon Hill holodeck adventure starring Picard and Beverly Crusher, called "The Captain and the Chorine." This one, by Susan Bredon-Smith, has murder, mayhem, and a genuinely interesting mystery. I found it especially intriguing to have enjoyed this particular story so much, because I've never been a big fan of the Picard/Crusher relationship. But I do love a good holodeck adventure, and this one is first-rate. I enjoyed seeing the two in a story that didn't have them yearning silently or quietly emoting over their long-unstated feelings for each other. The Captain and the Doctor are, above all, friends. This is something we rarely see in zine fiction. At the other end of my enjoyment spectrum was a relentless Will Riker hurt/comfort piece by Gill Marsden called "The Greatest of All Things Blue." At just under sixty pages, this one could have qualified as an independent novella. For whatever reason, the story held little or no appeal for me. It had a serious and involved story, intelligent use of the entire cast of characters, and a definite beginning, middle, and end, but somehow, I derived absolutely no pleasure or satisfaction from reading it. The same can nearly be said about Jeanette Jeanette Eilke's "Reconcilable Differences." This one is also quite involved, yet somehow unappealing. It does provide an interesting look at Federation contact with an alien ambassador, from the alien's point of view, but I disliked the use of the main TNG characters as little more than window dressing for the author's own creations I personally don't care to spend money to read about my favorite characters, only to find that most of the action revolves around the supporting players.

'Welcome to Borg-Mart," by Miranda Greene, is a delightful little tongue-in-cheek bit of fluff written with style and wit by Miranda Greene. Just imagine that the Borg have assimilated the entire staff of your local K-Mart and have become the ultimate cyber-shoppers, bent on drawing Picard and Company into their mad world. For those interested in a taste of Q, we have Antje Freudenberg's "Q-riosity" and Mike Koehler's "Broken Pieces." The first is a short piece in which Q uses a very simple lifeform to do a little spying, and winds up getting caught in his own trap. The second deals with how Captain James T. Kirk would handle it if Q were to make the same offer to him, at the end of his lifetime, that was made to Will Biker in the prime of his: the power of the Q to do with as he will.

As I mentioned before, I bought this zine seeking stories about Data, and Matter of Honor 3 has three. "0200 Hours," by Terry Rillera, brings Picard and Data closer together in the wake of the events in "The Measure of a Man," as each faces unresolved feelings over the late Tasha Yar. Michael Emond's "Family Ties," in which our favorite android explores his inner workings after finding favorite android explores his inner workings after finding records belonging to Dr. Noonian Soong, is a look at what might have been had the TNG episode, "Inheritance," not taken place. And Julie Lee's "A Tangled Web" gives a plausible explanation as to the real reason Data was left behind on the Omicron Theta colony. What if Data had been constructed with emotions, which were later later removed for the safety of himself and those around him? This one's the best of the lot.

Taken as a whole, while not bad, this TNG anthology could have been better. It doesn't really capture the essence of the series, and most of the stories inside weren't memorable enough for me to write this review without carefully scanning the contents again, and even rereading several of the entries. It's attractively produced and well worth reading, but somehow difficult to drum up any real affection for.[1]