Red Dwarf is a British science-fiction sitcom that ran 1988-1999. A three-part special was aired in 2009. This was followed by Series X, consisting of six episodes, which was first broadcast on UK TV-channel Dave in October/November 2012. 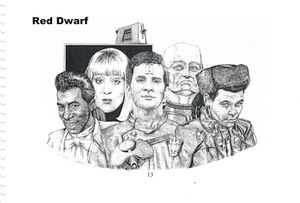 The cast of "Red Dwarf," art by Warren Oddsson, printed in Buddies: A Collection of Media Art 1958-2001, may have appeared in a previous print zine

The main characters are Dave Lister, the last known human alive, and Arnold Rimmer, a hologram of Lister's dead bunkmate. The other regular characters are Cat, a lifeform which evolved from the descendants of Lister's pregnant pet cat Frankenstein; Holly, Red Dwarf's computer; Kryten, a service mechanoid; and, as of Series VII to Back to Earth, Kristine Kochanski, an alternative-reality version of Lister's long-lost love.

The fandom is small, has been active since the 1980s and is still active today. The pre-Internet fandom centered around fanclubs, fanzines, informal meet-ups and the Dimension Jump convention. One early fan states that there was relatively limited crossover with general science fiction fandom; the show tended to attract comedy fans, many of whom were monofannish.[1] A relatively small number of Red Dwarf zines were produced, mainly in the 1990s-2000s.

By the mid-1990s, fans were congregating at the Red Dwarf usenet newsgroup, alt.tv.red-dwarf,[1] founded in 1993.[2] The Red Dwarf mailing list was founded in 1995,[3] and there was also a list hosted by the pipex.com list server.[2] Early fannish projects were often canon resources, and include a timeline for the universe, a catalogue of sources referenced in the show/books, the Plot Inconsistencies Project, and many others. Multiple fansites sprang up in the mid-to-late 1990s, including Ganymede & Titan (one of the few still extant), Hol's Post Pod Primer, Queeg's Red Dwarf Archive, Scouser's Red Dwarf Survival Guide, SmegWeb & Swirly Thing Alert, some of which were linked by the Red Dwarf Webring.[4]

Fanfiction appeared in some of the Red Dwarf zines. Red Dwarf fic also featured in several multi-fandom zines, largely with other more popular 1980s fandoms, such as Doctor Who and Blake's 7.

Red Dwarf fanfic has been posted to Fanfiction.Net since 2000. As of 2014, the site was at the time still the largest archive of Red Dwarf fic. However, it has since been surpassed by A03 as of 2021. Before this time, fanfiction was posted to other archives. The first online Red Dwarf slash fic may have been posted around 1999 - one contender for this position is Yuchtar's 'What the Smeg' (Lister/Rimmer, Kochanski), which was posted in early 1999.

It's likely that the rise of slash in Red Dwarf fandom was due to the founding of Yahoo group the Red Dwarf Slash Society in 2001[5]. ("Listmummies: Princess Lauren(princess.lauren.e@gmail.com), Poet (norse@hotpop.com), and Dervla Nightshade (DervlaNightshade@yahoo.com).")[6] Prior to this time, slash had largely met with flames from other non-slash fans, which had kept productivity low.

The Red Dwarf Slash Society (RDSS) was particularly active in its first three years, with around 300 posts per month (going up to 600 at its height). The group is still open today. The group is known for producing RPs that were turned into popular fics.

A sister group (the Red Dwarf Het Society) was set up a year later ("Listmummies: Lauren Scavenger and Dervla Nightshade"[7]), although it was never as popular. After the first few months, most months only saw about <10 posts.

There have been two major incarnations of the kink meme - the original Red Dwarf kink meme (2008-09) was hosted by Kahvi on Livejournal[8][9]. In 2013 saylee created a new kink-meme only Livejournal, starbuggers, because it had "been quite some time since the old one was started, and there [were] a lot of new faces in the fandom who might want to participate."[10]

Fics are now also posted (and re-posted from other archives) to Archive of Our Own. Numerous fans are also on Tumblr, and the fandom has its own Texts From Last Night Meme journal and Confessions journal.

Red Dwarf is a frequent request at Yuletide.

Most Red Dwarf fanfiction is for the pairing Dave Lister/Arnold Rimmer[11]. Other relatively popular pairings (far less so than the main ones) include Lister/Kochanski, and Rimmer/himself (in the form of Ace Rimmer),

In 2010 theficklepickle claimed that Red Dwarf is a fandom "which on the whole tends to go in for short, funny stories"[12], although by 2014 this view had changed. rosecathy1 suggested "longer, angsty and/or sexy stories [seem to] have the biggest draw[13], while janamelie commented "Maybe the "short, funny stories" observation was true once, but in recent years the most popular and prolific authors tend to write lengthy fics - Kahvi / Roadstergal, Felineranger, Kronette, Veronica Rich etc. They certainly can be funny though. :)"[14] Other fans agreed.

Some fanfic examples include:

Fanart has been posted in numerous locations on the internet, but is now largely collected on DeviantArt and Tumblrs. Popular themes include group shots and Rimmer in stockings (i.e. Low!Rimmer from 'Demons and Angels').

The biggest (only?) Red Dwarf-dedicated convention is Dimension Jump, organised by The Official Red Dwarf Fan Club. It has been held every year or every other year since 1992.[18] 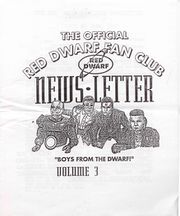 All single-author sites, unless otherwise indicated