The Small Rouge One 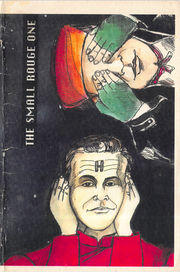 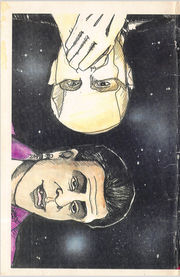 back cover of issue #1, Michelle West

The Small Rouge One is a gen digest-sized anthology.

The Small Rouge One 1 was published in May 1993 and contains 56 pages. The cover is by Michele West. Center artwork by Zaquia Tarhuntassa. Typing by Ann Hupe and Chris Logsdon Title suggested by Karen S. Mauldin.

From Media Monitor: "Sam Beckett's strangest leap yet - millenia into the future, into Cat - a man named Lister is in labor and Rimmer's convinced that the cutters are competent to perform a C-section; Rimmer, already on everybody's nerves, demands a holographic companion; a computer virus is loose aboard the Red Dwarf."

Welcome to a fluke.

No, I'm serious. This zine should have never came to being.

A few years ago, I was introduced by a British friend to what is my all-time favorite comedy show by the strange name of RED DWARF. Even the title sounded ridiculous! But after I saw the first episode, I knew I was watching a winner! So I asked for more; and I got more. A pity they only do six episodes a season...

Anyway, we thought, "If we enjoy this show, then there's a lot of fannish writers who would, too! So why don't we do a zine?" Bad assumption. The Logs of the Red Dwarf seeking submissions was soon announced... and nothing. After two years of waiting for just one story, we then announced that we had canceled the zine due to lack of interest. That's when I was sent the following golden pieces with more promised! Hell, if I knew that's what it took to encourage submissions for The Small Rouge One, I would have used that tactic a long time ago!

Incidentally, there will be an issue #2 out, but I'd love to hear from more contributors to flesh out the issue.

Note: Special Delivery appearing here is a revised version of what first appeared in Better Than Life #9 from Great Britain.

The Small Rouge One 2 was published in 1994 and contains 83 pages. The front cover is by Teegar, the back cover by Pam Whitelark, the insert by Warren Oddsson. Layout is by Bill Hupe. Copyrighted by Ann Hupe. 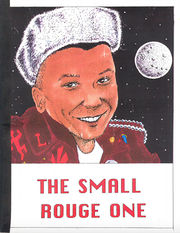 back cover of issue #2, artist is Pam Whitelark

From Bill Hupe's catalog: "Sam Beckett leaps into the slobbiest man in the universe; Rimmer and Holly engage in a tic tac toe game; Cat meets up with one of the Arks of felinoids and his future harem, lots more."

When I had announced that what had originally been planned to be called From the Logs of the RED DWARF was to be cancelled due to lack of interested contributors, I suddenly heard from Theodore Miller and Karen Mauldin. After spending most my night at Kinko's (until six o'clock in the morning). Small Rouge One came out just in time for MediaWest*Con in 1993. I then decided that if I was to do another issue, I wasn't aboue to be so sleep- deprived.

From issue #2, a photo of the Red Dwarf actors (Craig Charles and Robert Llewellyn), a border collie, and Ann Hupe. The man in the pale shirt and glasses may be is unidentified, but it is not Bill Hupe.

Considering how long it took to do one issue, I wasn't holding my breath for a shot at a second issue. But lo and behold, I received even more submissions, most of those enclosed within. Despite all that's happened on and off the RED DWARF set, there still might be a chance for yet another Small Rouge One.

For those who aren't aware of another hobby of mine. Bill and I breed border collies (those squirrely black-and-white sheep-herding dogs), and with our first litter, we decided to give the puppies celestial-related names... sort of. Skylass was named after her dad Skylad (sounds like Skylab? All right, maybe I'm really stretching it), Gypsy was named after the robot Gypsy on Mystery Science Theatre 3000 due to her small body but huge mouth, and the last -- the BIG boy -- was named Red Dwarf. (Q: What's black and white and red all over??) Red Dwarf became a wedding gift to friends of ours in Chicago and even was a con-goer at Visions 1992. Craig Charles and Robert Llewellyn were guest-of-honors and had voiced confusion when they heard the term "Red Dwarf" that didn't quite seem to be in reference to the show. That's when the Boyz from the Dwarf were introduced to the dog. And for those who won't believe that this truly happened, here's the polaroid to prove it!

The Small Rouge One 3 was published around 1995 and contains 100 pages.

Complete with a smeggin' color cover by Teeger, our favorite Boyz from the DWARF are back with a vengeance. More hilarious tales of the alternate universe written by Jeff Warshaw where Rimmer is really Ace (what a guy!) however, the Rimmer from the other universe feels he deserves a shot as he didn't have the right, knobby parents. Also, Cat and his two lovely brides (see SRI #2) have procreated like rabbits, and the DWARF is having a lot of problems dealing with the increased population. Also Karen Mauldin dishes up more stories, including "The Not-So-Fantastic Journey" where Kryten's experiments with micronization takes him places he preferred not to go. And many more stories... You'll just have to see 'em in the flesh.

The Small Rouge One 4