The Collection: Year One 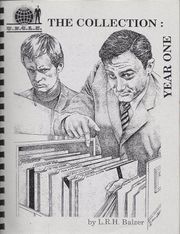 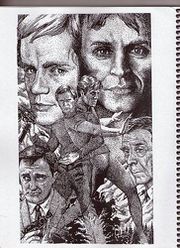 back cover by Warren Oddsson

The Collection: Year One is a 150-page gen Man from UNCLE anthology of fiction by LRH Balzer. Covers & illustrations by: Warren Oddsson. 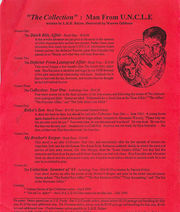 It contains four short stories set in the final episodes of the first season, and following the events of The Defector From Leningrad Affair.

By the time I stumbled across the organized Man From U.N.C.L.E. fandom and was introduced to that most wonderful of things — fanzines!— it was the fall of 1995 - Buying everything in sight was certainly a favorite fantasy but my bank, a singularly humorless institution, got rather nasty when I spent more than I deposited. Therefore when cousins started telling me I had to read Lois Balzer's series, I was forced to look at the five available at that time and pick only one. Being unfamiliar with her work, I opted for this collection of stories, rather than a single story novel—hedging my bets with the thought that even if I hated it, short stories are easier to get through. I didn't hate it. I've since managed to acquire all the others in the series, but I have to admit, this one remains a favorite, with frequent rereading.

The zine contains four stories set in the first season, falling just after the aired "Fiddlesticks Affair." The first "It Seemed Like a Good Idea... Affair" opens with a despondent Illya sitting in a jail cell awaiting his fate, his internal dialogue making it clear that somehow he's put Napoleon into severe danger, if indeed, not killed him outright. A flashback reveals the events leading up to this moment before shifting back to the present for the conclusion.

The second story is "The Affair." The premise is simple enough: Napoleon falls in love and begins an affair. But even in this, our agent manages to inject a healthy dose of danger and intrigue. The object of his affections is none other than Thrush femme fatale, Serena. Focusing on his trysts with her and fantasies of "happily-ever-after" lead to missed check-ins, forgotten meetings and eventual disaster for an undercover Illya. Napoleon is eventually forced to confront some hard truths while dealing with the aftermath of his actions.

The third story in what turns out to be an arc is "The Pelyonki Affair," and falls several weeks after story two. Illya, having been captured while under cover, manages to escape with the results of Thrush's latest horrific experiment. Alone, sleep-deprived and carrying a secret he dare not share, he struggles to rendezvous with his partner. Napoleon, working from the opposite direction, has been saddled with a very young, very brash April Dancer for the intent of evaluating her and demonstrating the strengths of partnership. The suspense builds as Illya races against Thrush and his ever depleting reserves of strength to reach safety.

The final story, "The Little Boys Lost Affair," is a short stand-alone piece wherein Mr. Waverly is forced to deal with the unthinkable: children in his office! It's a cute, amusing piece that lends a welcome lightness after the earlier, serious topics.

Looking back in hindsight, I can say reading Lois's series in the order it is intended is the best idea, as she develops a very full history and family for Illya in the earlier volumes. Some of these characters make appearance in this zine. Luckily for me, Lois is a very conscientious writer who sprinkles enough clues around to fill in the biggest question marks. I enjoyed the second and third stories best of all in this zine. I have to say, though, for all that I love the powerful "The Affair," I can't help wishing it had either been pared down to one focus or expanded to a full zine in and of itself to give each issue the attention it deserved.

Napoleon falling in love with his sworn enemy and trying to find the magic formula for having his cake and eating it too; prison conditions in the 60s; male rape and the emotions it evokes in not only the victim but other men — all fascinating ideas to explore and worth giving full attention to. Perhaps it was just so good that I hated to have it end so soon!

I also loved "Pelyonki" for showing a side of Illya that rarely appears in non-slash stories - the caring, nurturing man ruthlessly suppressed by the demands of Section 2 work. The other stories are equally good, hut not as monumental as these two.

It would be unforgivable to discuss any of Lois' zines without mentioning Warren Oddsson's invaluable contributions of covers — front and back, as well as frequent, wonderful illustrations scattered throughout. I've always felt he is particularly adept at capturing Illya's many moods and faces. Having illos scattered through a story are a special treat, and one found all too rarely. They add tremendously to the enjoyment of the story, especially when done by an artist this masterful.

Overall, I'd highly recommend The Collection: Year One to any MUNCLE fan. [1]