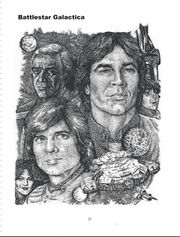 some of the crew, art by Warren Oddsson, printed in Buddies: A Collection of Media Art 1958-2001, may have appeared in a previous print zine 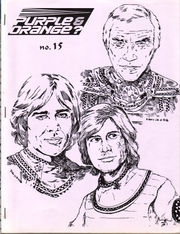 Starbuck, Apollo and Adama on the cover of the zine, Purple and Orange?

Battlestar Galactica came out in 1978, the year after Star Wars, produced by people who had worked for Lucasfilm. Fan anticipation was high, and the pilot got high ratings. The main two characters, Captain Apollo and Lt. Starbuck, were two very pretty men who fought side by side, and obviously cared a lot about each other. Everything seemed primed for a new fandom, and a new slash fandom.

Sadly, the writing wasn't very good, the effects were ahead of their time (and therefore very expensive) and the ratings steadily fell. There were only seventeen episodes of the first series, and another ten (even lower rated) episodes of the ill-fated reunion show in 1980, Galactica 1980.

Although fiction, and eventually slash fiction, appeared in both BSG and multimedia zines at the time, it never became a major fandom.

Richard Hatch remained a big fan of the concept, and was a willing guest at media cons trying to drum up interest in another reunion/remix/restart of the show.

BG had better redeem itself. The first episode was great. I was a little turned off by the religious content, and the constant "Chariots of the Gods" references, but I suppose if the Mayans had been removed from the Star Trek movie, they had to go somewhere. In any case, subsequent episodes really stank. Heavily borrowed story-lines made for weak scripts, and the acting, in most cases, was wooden. Nifty keen special effects, though. I've only missed a few episodes. Why do I keep, watching? Well, BG is better than most of the other stuff on the tube at present, and the special effects are fun to watch. I also like Apollo, Starbuck, Boomer, and Commander Tigh. With the last episode, involving Starbuck's father, Fred Astaire, I detected a glimmer of hope--there actually was a plot, and the story was rather interesting and hardled well. Besides, I like Fred Astaire. I hear there's some doubt about BG being picked up for next season. It will be a shame if it's cancelled. Letter campaign, anyone? Like W.C. Fields, however, I find little use for Boxey. Muffit is slightly more tolerable. Maybe we should have Harlan write a BG episode. [1]

There is much fanfic here.

In 2008, a group of fans created a virtual season: Virtual Second Season and Virtual Third Season.

Ad Astra | The Adama Journal | Airwaves Battlestar Galactica Special | Alternate Conspiracy | ANKH | | Anomaly | Anomaly Battlestar Galactica Concordance | Apollo's Odyssey | The Aurora Signal | Babblestar Blastica | The Battlestar Galactica Files: Cylon Attack (by D. Murry) | The Battlestar Review | Blue One | Blue Squadron Journal | Book of the Word | By the Lords of Kobol! | The Carousel of Mourning | Change of Command | Colonial Forum | Colonial Warriors Technical Manual | The Colonials | Cosmic Communications | Cry Sanctuary | Erato | Felgercarb | Fire In His Soul | Frak | Galactica | Galactica 1988: Ten Years Later | Galactica Gazette | The Galactica Journals | Galactica History: From Kobol to the Colonies | Galactica Stuff: A Colonial's Guide To The Galaxy | Galacticamania | The Galactican | Ghosts in the Machine | The HomLegends from the Rising Starecoming | The Hunt I (by Erik Sprowls) | In the Shadows | Journals of Kobol | The Kobol Chronicles | Last of the Pirate Queens | Legends from the Rising Star | The Lords of Kobol | Loyalty Check | Melas | Mind in the Shadows | Misfit File | Murmurs | The Pegasus Chronicles | The Battle of Molukai | Cain's Command | Second Coming | Joint Maneuvers | The Plot | Purple and Orange? | Pyramids | The Race for Earth | Rainbows Always End | Red Squadron Dispatches | Rising Star | Saga of a Star World | Shelter | Sins of the Fathers | The Star Kobol Journals | Song of Caprica | Star Searches | Streets and Stars | Survive the Alliance | Tales of the Galactica | Tally of the Souls | The Thirteenth Tribe Newsletter | Thicker Than Blood | To Be Reborn | Tribal Tales | Two from Thirteen | Vipervisons | Visions of the Galactica | Warriors' Luck | We Know Who We Are | Well Met in Space and Time | Who Lives By the Sword

Clean Slate Press was a BSG publisher during the 1980s and '90s. In 2002, a fan who noticed that the press had stopped publishing got permission to post several of them to his own website, collected on a page called Free Battlestar Galactica Fan Fiction Novels (includes several standalone short stories as well as the novels and connected short-story collection below).