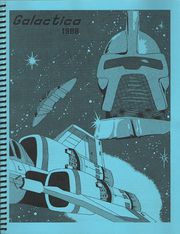 This is a 'Best of' Galactica fan fiction book. It has stories featuring all of the major characters as well as artistic portraits of each of them.

From a July 1993 ad in GAZ: "Some of the best of ten years of BG fan fiction, prepared by Clean Slate with the input and participation of numerous zines and fans. Sample the full spectrum of action, adventure, romance, tragedy, and comedy from the fans who made Galactica what it is today."

Some of the stories include: