From Fanlore
(Redirected from GAZ)
Jump to: navigation, search

You may be looking for the fiction zine Generic Zine. 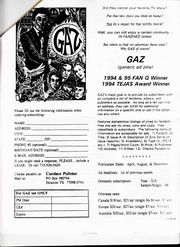 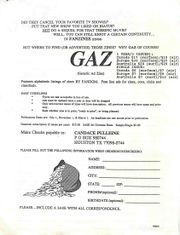 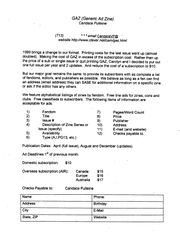 Originally published quarterly, it appears to have gone to a every three months schedule at some point.

In 1990, and perhaps earlier, Star Trek zines were available in a supplement that was available for 45 cents.

The British sister zine, which the editor of GAZ was the American distributor for beginning in 1990, called Adzine.

Many of the covers of "GAZ" were illoed by Laurie Keeper.

In 1991, the editor apologized for the lateness and sometimes disorganization, pointing out that the zine had been growing by leaps and bounds and getting harder to handle. She also said: "Since some of you depend on this for a shopping list at Media West, you probably pick this issue up there. When you get home, pass it along to a friend with my complements."

The zine was produced by some combination of Jennifer Payne (later Jennifer Herbert), Erika Frensley, Sue Wells, and Mysti Frank [1]

In July 1993, the zine was published by Candace Pulleine & Carolyn O'Neal.

Did they cancel your favorite TV show? Put that new show you liked on hiatus? Not do a sequel for that terrific movie? Well, you can still enjoy a certain continuity...in fanzines. But where to find (or advertise) those zines? Why GAZ of course! GAZ (generic ad zine), FanQ, Stiffie, and Tejas Award Winner. GAZ's major goal is to provide its subscribers with as complete a list of fandoms, editors, and publishers as possible. As long as a fan can find an address, they can SASE for additional information on a specific zine or ask if the editor has any others. Features alphabetical listings of zines by fandom. Free line ads for zines, cons, and clubs. Free classifieds to subscribers. Publication dates: April, August, and December. Ad deadlines: 1st of previous month.

SOME OF THESE DATES BELOW ARE SIMPLY A GOOD GUESS:

Generic Ad Zine v.3 n.1 was published in spring 1990 and contains 44 pages. It was compiled by Jennifer (now Herbert). 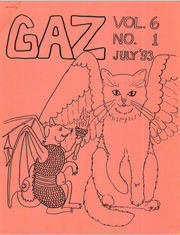 This is Volume 6, Issue 1, July 1, 1993. The new management is REVELcon Press. GAZ's new managing editor is Carolyn O'Neal (she customized the program we are using). THANK YOU CAROLYN! The new publisher is Candace Pulleine. The cover was done by Laurie Keeper. MANY THANKS LAURIE. The Dragadillo (the GAZ logo under Jennifer's auspices) is named Gazpacho. The wing cat (Pegacat?), the GAZ logo under REVELcon Press, is unnamed as yet. Any suggestions?

front cover of v.6 n.2
This issue has a letter from a fan:

Attention all MAN FROM U.N.C.L.E. fans! It has come to my attention that there is serious talk about making a new theatrical length movie based on our favorite secret agents. Napoleon Solo and Illya Kuryakin. Mr. Norman Felton has asked that anyone and everyone write directly to him, expressing their approval for the making of such a movie. He plans to take all these letters to the new producers, to show them we mean business, and there is definitely a need to have this movie made. Mr. Felton promises that he will personally write back to anyone who writes to him, so let's all drop him a note and give him writer's cramp, okay?! His address is below. Send a letter or post card wherein you say how much you enjoyed the old show and would love to see a new one made. Be sure to include yhour return address so he can write you back!! Please make no mention of the actors, since no one has been signed as yet, and we don't know who will be. There is really a very good chance this movie will be made, but we all need to band together and show our support. Please write him today. Thanks. Lisa Brazdil, editor of "The Kuryakin File".

Generic Ad Zine v.7 n.2 was published in August 1994 and contains 105 pages. This issue contains a long list of fan birthdays by month and day from July through November.

Generic Ad Zine v.7 n.3 was published in December 1994 and contains 102 pages. This issue contains a list of fans birthdays in December-March.

One zine publisher had this notice:

ORION PRESS, a fan-run, fan-supported press which has served Star Trek fandom for over fourteen years, has decided it will not have any presence at MediaWest*Con 15. Our decision is based on the unprecedented institution of a room lottery system which has left a number of our readers, contributors and editors without rooms in the convention hotel, thereby diminishing our enjoyment of the convention as well as adding undue expense to our convention budget. This being the case, ORION PRESS wishes to inform those readers who normally attend MediaWest*Con in order to purchase our zines that we will be taking part in REVELcon, ShoreLeave and other 1995 conventions to be announced later. We hope that ORION PRESS will be able to return to MediaWest*Con in future years. We will do so when the lottery assignment policies are replaced with something we and our readers find more acceptable.

GAZ v.9 n.2 was published in August 1996 and contains 102 pages. There is a birthday list for fans for September-December.

The cover is by Sherlock.

[From 1992, Bill Hupe's description of "FYI" and GAZ]: "These two may not have the flash of Media Monitor, nor the organization, either, but their content amount is somewhere between Zine Scene and Media Monitor. FYI does tend to run a bit longer ads, but otherwise these are about on par with each other, except Generic Ad Zine demotes all Star Trek and ST-TNG fanzines to their own supplemental listing, available at additional cost, and without any description. It has also been some time since the last GAZ, but up until recently, it was almost impeccably on time. FYI (which we also agent) has almost always been nearly right on schedule." [2]