You may be looking for the Deep Space 9 zine F.Y.I.. 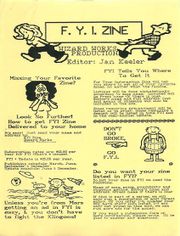 FYI Adzine is a fan resource.

We're not a fancy adzine but we get the job done. We've maintained a quarterly publishing schedule with less than a handful of late issues (and those were just a few days off, okay so one or two had been a week late, but that's it!). We have a laser printed master and we're side stapled, no artwork cover but chock full of ads for every fans pleasure. We have zines, newsletters, other adzines, fan clubs, merchandise and want ads. Everything those fancy guys have and for less. It costs nothing to advertise with us, so if you've never tried us, or if you have in the past and just forgotten to send in your latest ads, why not try FYI again." In 1993, the cost was

For Your Information 12 was published in September 1992 and contains 50 pages. 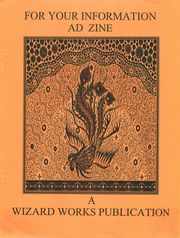 These two may not have the flash of Media Monitor, nor the organization, either, but their content amount is somewhere between Zine Scene and Media Monitor. FYI does tend to run a bit longer ads, but otherwise these are about on par with each other, except Generic Ad Zine demotes all Star Trek and ST-TNG fanzines to their own supplemental listing, available at additional cost, and without any description. It has also been some time since the last GAZ, but up until recently, it was almost impeccably on time. FYI (which we also agent) has almost always been nearly right on schedule. [1]

Despite the fairness of the editor, this one isn't my favorite [adzines]. Media Monitor doesn't print ads for the infinite number of zines Bill Hupe is agenting or reprinting, but FYI does. (Some of the stuff Bill is reprinting wasn't worth the trees the FIRST time round, much less now at "classic" prices. And the authors didn't give him reprint permission, just the editors..) MM prints SOME of Bill's ads, but does others' too, and from some very unusual fandoms. [2]