This open letter by P.N. Elrod was published in FYI Adzine in September 1992. 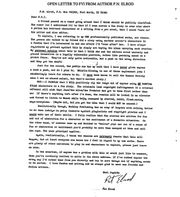 A very similar letter, but one worth reading due to the differences, see Open Letter to The Neutral Arbiter from Author P.N. Elrod.

Note: see P.N. Elrod for this author's own Blake's 7 fanworks.

The rumor (as I understand it) is that if I come across a fan story in some zine where a person has borrowed characters or a setting from a pro novel, that I would "turn in" the writer and zine editor.

To explain, I was referring to my OWN professionally published works, not others.  The person who talked to my friend did a story using another writer's characters in  a fandom that I'm interested in and was afraid I'd "come after" her. I have always  registered my protest against this by simply not buying the zines carrying such stories.  My personal opinion about this is that I think she and the editors acted unwisely and  placed themselves in a legally vulnerable position, rather like perching naked on a  picket fence. They're not only quite noticeable, but a push in the wrong direction  and they get the shaft!

Just for the record, the public now has my word that I have never given anyone a such a push, nor do I plan to. Whistle-blowing is one of those unpleasant jobs I shudderingly leave for others to do. (I have been known to call the Humane Society when I see an abused animal, but that's another story.)

BUT -- I PROMISE that I WILL positively rip the lungs out of anyone using MY VAMPIRE FILK characters in a fan story. The criminals (and copyright infringement is a criminal offense) will wish that Jaws/the Alien/the Predator had got to them first rather than me! If there's anything left after I'd done, the remains/will be locked in an elevator and forced to listen to Muzak while being consumed by starved, rabid, flesh-eating mega-scorpions. (Maybe not, but you get the idea that I would NOT be amused.)

Realistically though, Berkley Publishing has an army of lawyers with nothing better to do than indulge in pricy lawsuits against plagiarists and copyright pirates and I would make use of their skills. I fully realize that fan stories are written for fun and out of admiration for a character or the excitement of a dramatic situation. On the other hand, if someone came up and decided to "borrow" your car out of a sense of fun or admiration or excitement you'd probably be more than annoyed at them and call the cops. The same principal applies.

Again, realistically, I think the chances are extremely remote that this will happen, but at least everyone now knows how I feel in regard to my own works. There are plenty of other universes to play in and characters to explore, please just leave me mine.

In the meantime, if anyone has a problem with this or would just like to comment, then you're cordially invited to write to the above address. If I've rubbed anyone the wrong way I'd rather hear from you directly and try to sort things out if anything needs to be sorted. I love fandom and writing and am always glad to meet new friends and fellow writers.

The 1993 Letter in "The Neutral Arbiter"

This letter is very similar to the one in FYI Adzine. It was also written in 1992, but due to the lateness of The Neutral Arbiter's seventh issue, it didn't appear until 1993. The differences between these two letters probably had a lot to do with the fact that Elrod was a long-time fan of Blake's 7, and had contributed many letters and wrote and edited fanzines in this fandom; her comments were probably somewhat tailored to this fact.

I've covered this elsewhere (including letters to 6 adzines) but thought I should mention it again. It's come to my attention that there may be a rumor going around fandom that I will "turn in" anyone taking a literary character and writing a zine story with them. For example: a KTD story or Elric of Melnibone turning up in a Trekzine. (The mind boggles).

For the record, it ain't my job to blow whistles. I've always registered my protest against this simply by not buying the zine and don't plan to change. I will, however, defend my own copyrighted work and will cheerfully rip the lungs out of anyone using any of MY characters in a fan story.

Whatever is left gets tossed to the tender mercies of the Berkley Publishing Groups lawyers. This sounds harsh, considering that such fan stories are usually written out of admiration for an author's work. For instance, I dearly love Lois Bujold's Miles Vorkosigan, but would never presume to drop him into any of my fanfic. Only Lois can write the way he should be written; the same goes for anyone else's original work.

Granted, it is crazy, but there IS a difference between a literary character and a media one. Mostly it's because media giants know that zines are too small to bother going after, but underpaid writers (like me) can't afford to be that generous. some may welcome fan paritciapt in their universe, like Bradley and Wendy Pine, but I'm not one of 'em.