Trekzine Times is a Star Trek: TOS letterzine published by Forever Productions featuring reviews and articles and letters of comment about zines.

How can you become an informed zine buyer? The Trekzine Times is a letterzine about fanzines featuring articles by familiar names in a fandom concerning publishing, editing, writing, illustration, and reading. Also, challenging contests, and more. Its main focus, though, is readers' letters of comment, their fanzine opinions, critiques, cheers, boos, and hisses, and most importantly, fanzine readers' ideas. [1] 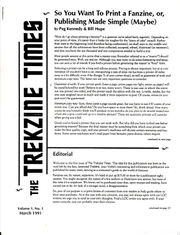 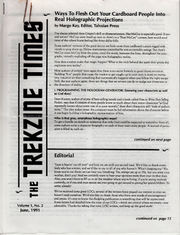 cartoon by Juanne Michaud -- "The Perils of Fan Fiction..." 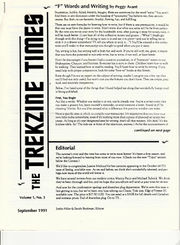 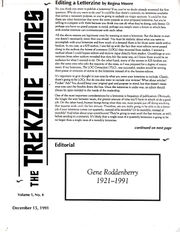 cartoon from v.1. n.4 by Juanne Michaund, "It was 25 years ago today that Roddenberry sent them on the way, they've been goin' in and out of style, but they're guaranteed to raise a smile, so let me introduce to you, the act you've known for all these years, Star Trek the interstellar, good guys band!" 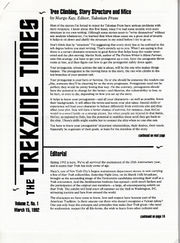 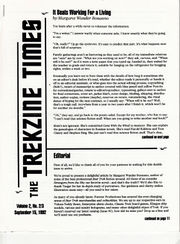 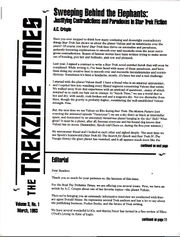 For some time now, I've been lamenting (volubly, and at length) the lack of basic writing skills prevalent in the current crop of ST.TNG writers. I'm referring to fan writers, of course. That the pro ST:TNG writers don't seem very gifted may be attributable to the strictures placed on them by the Powers That Be; strictures which, rumor has it, make writing a novel an exercise comparable to doing Houdini's escapefrom the straight-jacket and water tank without benefit of knowing where the catch is.

But I digress. Obviously, I'm not the only one who's seen the need for emergency remedial measures. Like the answer to an agnostic's prayer comes Trekzine Times, a quarterly publication dedicated to the praiseworthy proposition that anything worth writing is worth writing well.

The issues I've read (June, September, and December, '91, and March, '92) arc excellent examples of desktop publishing techniques. Editors Jordys Miller and Sandy Bookman have done a fine job of using the tools at hand to create a design that is both distinctive and readable. (To be precise, this tyro's tongue hangs out in awe and envy at the quality and style of the production-especially after another frustration-fraught bout with my own computer.) Pull quotes and little Enterprise graphics prevent a simple, mostly art-free layout from becoming boring. Their selection of quotes to pull was a bit random in the first two issues I read, but later issues show that practice has brought improvement in that respect.

I did say mostly art-free. A definite plus in the graphics department is Juanne Michaud's art-one 'toon per issue, and each a gem. They're well-crafted and genuinely funny. The editors would be well advised to keep that artist happy.

Trekzine Times runs about fifteen to twenty pages per issue, and consists primarily of zine reviews, articles on writing, and letters of comment, along with a smattering of other entries, including short articles on new developments in the computer world, desktop publishing tips, and contests. There's also a column entitled "Diversion," which appears to consist solely of reprints of essays from The New Yorker magazine. Questions of permissive use aside, these reprints appear to have no real relevance to fandom or fan publishing, and I would have preferred it if they had saved the paper, oral least put it to better use. After all, if I want to read The New Yorker, I know where to find it. Finally, there's the "Dealer's Table," a short listing of all zines mentioned in the issue. Joan Verba used to do something similar in Trek Link. I liked the idea then, and it's still a good one now.

I was impressed by the lead article in the June, '91 issue. In "Ways to Flesh Out Your Cardboard People into Real Holographic Projections," Margo Kay discusses character creation and development. While some experienced writers may scoff at the rudimentary topic, I found the article entertaining, imaginative, and absolutely right for its target audience. Frankly, some guidance on the art of building believable characters is sorely needed by many in the current crop of neo (and not-so-neo) fan writers. A bibliography is provided for those wishing to explore further.

Much of the rest of this issue consists of a review by Sandy Bookman of the pro novel, A Flag Full of Stars, and LoCs, most of which are commentary about zines; not surprising since that's the primary focus of Trekzine Times. It wouldn't be fair to dissect LoCs, since the editors can't really control LoC form and content (on the other hand, when the bulk of a zine is LoCs, can one avoid taking LoCs into consideration when assessing the overall quality of the writing?). However, many of these LoCs read very much like reviews, and I found myself wishing the editors had polished them up a bit and presented them as such, thus improving the overall quality of the writing.

I was less impressed by the lead article in the September, '91 issue. "'F' Words and Writing," by Peggy Avant, is a primer for beginning writers. Ms. Avant offers practical suggestions about setting aside both time and space for writing, and useful tips on supplies and equipment, but I was dismayed by her advocacy of plagiarism and extensive "borrowing" from one's favorite books, movies, or plays—particularly since some fans' work makes it abundantly clear that they've done just that, and that their favorite books are Harlequin romances. Or worse. And there is more than a hint of irony in the fact that such useful and intelligent ideas about writing are presented in a piece that itself suffers from excess verbiage and poor sentence construction. With one more rewrite, this would've been a truly outstanding essay. Marcia Pecor's review of Profiles in the same issue is interesting; she writes vividly and well. Minimal editing would have smoothed out the few spots where awkward phrasing mars an otherwise competent review.

Michael Bubrick's reviews of Abode of Strife #17 and Vulcan's Lyre #26 are exhaustive-and exhausting. These painfully thorough plot synopses are strongly reminiscent of those book reports we all wrote in elementary school, back when we were very young and didn't know any better. A review is at its best when it offers a discussion of styles, ideas, and techniques, rather than a rehash of events in the story. The best reviews provide insight--and entertainment--in a way no mere chronology can. This is not to say that Mr. Bubrick can't write--on the contrary, he appears to have an excellent grasp of the basics-but his work would be much more interesting if he would abandon this pedestrian approach fora more analytical and personal one.

The December, '91 issue contains Regina Moore's article on editing letterzines (called, appropriately enough, "Editing a Letterzine"), in which she sets forth some cogent ideas and suggestions in a clear and logical fashion. In the reviewing department, Sandy Bookman tackles William Shatner's (or rather, Ron Goulart's; are there any fans left who still don't know about that novel's true origins?) Tekwar, and Michael Bubrick discusses Halting Frequencies #3. At length. For me, the high point of this issue is the "Bad Moments from Zines" Department, which takes some well-aimed (and well-deserved) potshots at Lt. Mary Sue and other Trek story conventions.

The March, '92 issue features Margo Kay, again, with "Tree Climbing, Story Structure and Mice" (does this woman have a way with titles, or what?). This time she's talking about story structure and motivation, and, as before, the article is intelligent, understandable, and entertaining.

On the whole, my reaction to Trekzine Times is positive. I would like to see more effective editing of some of the contributions; I suspect that time constraints and the logistics of putting this puppy out so often are a factor here. Then again, I'd hate to see them go to fewer issues per year, since the frequency of publication means the information and feedback is still timely when it gets into print. That they can produce something this attractive and information-packed, so often, is a tribute to their dedication and organizational abilities. And each issue gets just a bit better-these folks obviously aren't content simply tocoast along on what they can get away with.

The high quality overall of the articles and production (not to mention Juanne Michaud's 'toons) makes this an excellent resource for the fan who's interested in expanding his or her expertise on writing techniques and considerations. I give it three trees (three and a half, actually, but I don't let anyone else award half-trees, so I suspect I'd better not let myself do so, if l want to stay healthy),[3] and wish its publishers the best of luck with it. I hope it stays around for a long time. [4]