Legend's End is a Star Trek: TOS novel in two parts, a number of years apart. The author is April Valentine, the name the author uses online. 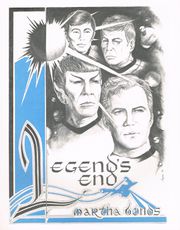 Some sources and fans call this a slash story. Some say the first volume is gen and the second is slash. Others say both are gen, or friendship stories.

The ad for these zines in The Monthly does not mention slash: "[V.1] is a novel of loss and anguish that eventually grows into a resurgence of hope. The Federation has been invaded and conquered, each of the Enterprise officers believes the others dead. But Spock finally finds and rescues Kikr, then they set out to fight back against the invaders... [V.2] is the conclusion... Kirk, Spock, McCoy create a resistance movement and set out to recapture the Enterprise. Hurt/comfort Kirk Spock friendship."

Summary from unknown source: "Legends End is a story of endings, of new beginnings, of lost pride and regained hope of tyranny and heroism. The story is about the men who created legend and who refuse to let it end."

Summary from Boldly Writing: "Primarily a K&S friendship story, it dealt with the aftermath of an invasion, in which the Federation was conquered and its inhabitants enslaved. Kirk and Spock are separated inthe process; Spock takes it upon himself to find Kirk."

From Gilda F: (who describes both parts as gen) "When the Federation is conquered by an alien race, Kirk is sold into slavery as a source of emotions to be fed on by his new masters." (part one) and "After Spock, McCoy and Sulu escape their captors, they find refuge on a forgotten planet and Spock sets out to find his missing captain." (part two).

From a 1992 flyer in OktoberTrek: "Legend's End, a Trek novel in two volumes, depicts the story of a Galactic war the Federation cannot hope to win and the consequences the Enterprise crew must face as a result. Against impossible odds, Kirk, Spock and McCoy must struggle to survive, to regain their freedom and find each other in the chaotic aftermath of alien takeover. Volume I, published in 1984, saw the rescue of Kirk by Spock and McCoy. The Enterprise officers found refuge on the planet Chameleon which, screened by atmospheric dust, has so far escaped detection by ;the invading Moropan forces. As Volume II opens, Kirk and company are planning the resistance, seeking to rescue other Federation captives, and hoping to find and recapture the Enterprise. Will they be able to fight against the savage new regime? What is the price of being conquered and when does the cost in individual ,ideals become too high to risk for the good of one's own civilization?"

Welcome to LEGEND'S END. I'm glad it's finally in your hands at last. This is a story that's been with me for a long, long time. The writing was begun several years ago, though with other commitments, I couldn't begin in earnest until the fall of '82... but LEGEND'S END goes back even further than the last two years -- parts of it have been with me as long as I've been in fandom. The aliens in the story, though they've gone through many changes, were created for my very first piece of fan fiction -- one that will mercifully never see print. And ever since I though it would be interesting to have Kirk forced to wear a hat to conceal his ears instead of Kirk... LEGEND'S End is a story of endings, of new beginnings, of lost pride, and regained hope, of tyranny and heroism. It is about the men who created a legend and who refuse to let it end. This is volume one of two -- but don't panic. The story you hold in your hands is complete between these covers. Volume II is in the early planning stages -- being plotted -- and will resolve some of the loose ends contained herein. But please, don't feel you need to wait until it is published to read this one.... It will be a while, but it will be finished eventually. SASE, please. Why two volumes, you ask? For some reason, my mind conceived the story that way. It's really two complete inter-related tales I'm telling. And I knew that if I waited until the entire, overwhelmingly long story was written as one unit -- and it just might never be told. Hence, I decided to go with my original concept of two volumes. Besides I like to keep fandom dangling... One final note -- since LEGEND'S END was created long ago, the Kirk and Spock who experience it are the Kirk and Spock of the first five year mission. In this time line, the three Trek films do not exist.

Legend's End 1 was published in 1984 and contains 188 pages. It contains no slash. The art is by Suzan Lovett.

The author thanks Suzan for her lovely art and advice:

First and foremost, thanks go to Suzan Lovett, who's beautiful illos illuminate the story so well. All the graphics are hers, too. She also gave valuable input concerning the content of the story.

Legend's End 2 was published in 1992 and contains 201 pages. It has a front cover and one interior illustration by Suzan Lovett, the rest of the interior illos are by Michael Weiner.

I also would like to mention that Legend's End by [April Valentine] is now reprinted and was available at Shore Leave in Baltimore, MD. She is currendy raking orders for Legend's End 2, which she hopes will be ready for OctoberTrek in Baltimore. It is a thriller, for those who haven't read it. The Federation is conquered by an alien race that feeds off emotions. The story follows the separate tales of Kirk, Spock, and McCoy during their captivity. [1] 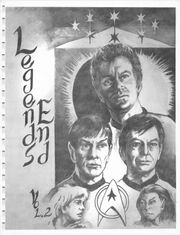 front cover of the hard to find issue #2, Suzan Lovett. This issue is one of the more sought-after zines in Star Trek fandom. 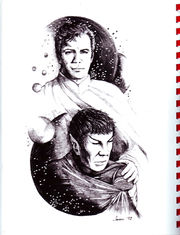 inside art from issue #2, Suzan Lovett. Kirk and Spock are wearing non-Federation clothing. The clock Spock is wearing is similar to the one he wore when infiltrating the Organians, another powerful alien race on the TV show that exerts control over the Federation and Klingon Empire. The clothing choice may be mean to invoke the similarities to April's aliens. 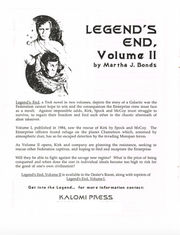 a flyer printed in the 1992 OktoberTrek program book

LEGEND'S END is a two-volume Trek novel. This first volume is complete in itself, though the main goal of the story is not realized. I thoroughly enjoyed this zine. It was very clean and neat. The print is large and not at all cramped; very easy to read. There are nice graphics throughout. It has very lovely illustrations (twelve to be exact;) by Suzan Lovett, plus a very nice cover with Kirk, Spock, McCoy, and Sulu together. The illos are full-page and, as usual, convey a great amount of emotion. They really enhanced a very imaginative story. The story begins with a devasting attack on the Enterprise by a new-to-the-galaxy race of very alien aliens. These aliens have very repugnant survival needs and, eventually, they invade and occupy Earth, Vulcan, and other Federation territories and starbases. April, a scene from a popular, official still photograph moves right along with action, emotional tension, and great perception of human psychology and emotion. It is a frightening, intriguing story, filled with relationships and love. If you enjoy a complex freedom-fighters story, you will want to read this novel. [April] explores in turn the capture and torture or subjugation of each of the three main characters (K,S,Mc). She does this so clearly, with such well-chosen words and command of the English language, that I was swept up into this world. It seemed very real to me. First, she explores how Kirk feels when he is separated from his crew and believes that Spock and McCoy are dead and that the Enterprise has been totally destroyed. While Kirk is barely enduring his new "life", we see what has been happening to Spock and McCoy, each of whom has also been told that the others are dead. [April] explores the desolation that each feels when he believes that he is alone. The story is very adventurous and fast-moving (but not too fast), filled with emotion, tension, and soul-searching. For all the tension and depth of feeling, however, it is not depressing. [April] put in just enough light humor and a lot of hope to spare the reader depression. It is very thought-provoking and sobering, though. I am eagerly awaiting Volume Two! [3]

[the first volume]: "Is this really the end of everything? Why do I believe mankind will find a solution this time? It seems so stupid. We managed to save ourselves from ourselves, make the beginning of a beautiful universe, a place where we humans, and our brothers, could build a future. God, we were pompous, thinking that once we got rid of war and prejudice and need and hunger we had It made. We never realized something from the outside would finish us off, so quickly, at the end." The Federation has been defeated by the Moropans, a warlike race with limited psi talents. The ENTERPRISE was taken and her crew separated, tortured, Interrogated, and finally sold Into slavery. LEGEND'S END follows the fate of the main characters. Spock Is tortured and drugged In a search for scientific knowledge. McCoy Is forced to torture other humans to death for the Moropans, And Kirk is sold as a vrisha. So what Is a vrisha? Like you don't want to know. The Moropans are emotional vampires, able to control humans and drain their emotions. They use other races as emotion generators or vrishas. Without this they die, but using a human as a vrisha condemns him to a slow, degrading death. It Is only fair to warn the prospective reader that the main characters really hit bottom In this novel. In fact, the whole Federation hits bottom. It Is really amazing how the Moropans walk over the Federation and Its loyal citizens. Ms Bonds has created a formidable alien foe In the Moropans. I particularly liked the way [April Valentine] handled the vrisha concept. The scenes in which Kirk's owner stimulates his emotins and feeds off them are very powerful. So how are they going to get out of this mess? Read it and see. Although the complete work is projected as a two volume effort, LEGEND'S END, Volume One leaves off at a convenient place and is more or less complete as a novel. There is no cliff-hanger to force one into buying the second volume. However, I am looking forward to Volume Two. I want to see those nasty aliens licked. I give this one an 8 out of 10. While not an instant classic. It is reasonably well-written, the characterizations are credible. the plot novel and entertaining. The print job Is excellent. The illustrations are good and reproduced well. The graphics are excellent. [4]