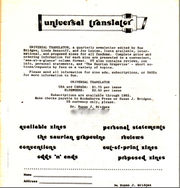 flyer from the 1982 Media West program book, click to enlarge

Universal Translator is a Star Trek: TOS adzine - a non-fiction zine of fanzine listings, reviews, and con announcements. It ran seven years and had thirty-two issues. As of Issue #13, it had 250 subscribers.

It was replaced in 1987 by the adzine Communications Console.

From the publisher's ad: "[Universal Translator] is a quarterly newsletter listing available, proposed, and international zines for all media fandoms in a convenient, 'see-at-a-glance' format. Also includes reviews, con info, and other items of interest to fandom." [1]

From Boldly Writing: "The general format included fanzine listings, announcements, reviews, and a list of conventions. Press publications were listed separately, showing that a significant number of fanzine editors had organized their productions into small presses by that time. Universal Translator had its own in-house reviewer, T'Yenta. T'Yenta announced that she got her pen name from a character in a Star Trek story written by Mindy Glazer, but that she was not Mindy herself."

Nearly the Winner of a Hugo Award

In 2017, Linda Deneroff spoke about this zine nearly winning a Hugo Award:

In the early 80s, I worked with another woman and we did a fanzine called Universal Translator. And Universal Translator was simply a list of all the available fanzines with mailing addresses, prices, and descriptions of the fanzines. And –[LAUGHS] –there was a group of people in the Midwest who said –because “fanzine” is a category of Hugo Award, and a media fanzine had never won a Hugo Award, a fanzine award—“Let’s get a Hugo nomination or Hugo Award for Universal Translator!” And it got nominated. But we didn’t win. But when I got to Atlanta, where the awards were being announced, I heard such vitriolic epithets. “Oh, they bought the nomination, and they asked people to nominate it,” you know, because the fanzine fans, the science fiction fanzine fans had never heard of Universal Translator. They had no clue what it was. But we came in second. We didn’t win, but we came in second, so I was pleased. My name wasn’t on the ballot because I was the silent editor. I didn’t want to be –I didn’t want my name on the fanzine, because it really wasn’t my fanzine. We were using my office to type it and print it, but the real work was being done by the editor, Susan, and I didn’t want to take any credit for that, so I never put my name on the fanzine. But I knew that we were nominated and that was a great honor. [2]

Although Universal Translator was not a letterzine, such as Interstat, it did feature a limited letters section, running fanzine-related announcements. Even so, there was a fairly intense discussion relating to the fact that demand [in January 1983] for fanzines often outstripped supply. In January, Dorothy Laoang got things going by saying, 'I discovered fanzines long after Thrust, Nightvisions, Companion, etc. went out of print. I have tried in vain to obtain copies of these and other zines to read, if only to borrow and return. Like a great many others, I cannot afford to pay auction prices upwards of $50 per zine. [We] are not asking for a handout, nor are we likely to run out and pirate your zine if you are rash enough to lend us a copy.' In the next issue, Lynda K. Roper countered that fanzine editors were not obligated to loan out copies to anyone who asked for one.

In the third issue of "Universal Translator" (May-June, 1980), some zine ads used the term K/S in a way that suggested zine buyers knew that the term specifically meant sexual relationship stories. However, the overall usage is somewhat inconsistent. The zine Companion #1 was advertised as "a sexually explicit K/S zine." The zine Mirrors of Mind and Flesh was advertised as "a K/S zine featuring both Kirk and Spock and their mirror counterparts." The zine Nightvisions was advertised as "a K/S love story ... there is explicit sexual content." The ad for the zine Nome #2 stated it "contains K/S and other adult material." The Pon Farr Press ad stated that "All issues of NAKED TIMES are devoted to the K/S relationship, and CONTAIN SEXUALLY EXPLICIT MATERIAL." The zine Galactic Discourse #3 was described as "a K/S/Mc character-oriented friendship zine" The zine Sol Plus #6/7 was advertised as "including a Kirk/Spock story with a brief non-graphic sexual scene." In that issue, a review of Contact 5/6 (written by the editor of Sol Plus) characterized Contact as a "GP-rated (Rating for violence, not sex), K/S hurt/comfort zine." A review of Nome #2 stated that "some of the material quite definitely favors the K/S premise, other stories just as definitely don't." The Starsky/Hutch zines were called either S&H or Starsky & Hutch, and there were no mentions of Starsky/Hutch or S/H.

By 1984, both the ads and reviews, at least in "Universal Translator," used the terms K/S and Kirk/Spock consistently.

In the 1986 (January/Feburary) issue, Universal Translator (like Datazine had done earlier), started to separate Star Trek zines into gen and K/S.

This was a major step in a change in understanding of the genre and the terminology of the word "slash."

[our response to] "a request to identify whether our "Star Trek" material is K/S. This makes a lot of sense to us, and we have tried to list 'K/S' in the fandom identification column where appropriate, using the ads as a guide. I'm sure that we missed a few. I'd appreciate it if the editors of all 'slash' zines, of whatever fandom, would help out by letting me know if I've missed an identification. Also, I am looking for a short 'slash' ID for "The Professionals."

"For the most part, we had a positive response from both editors and readers to our attempts to identify K/S and other '/' material. . . . Thanks to all you PR fans out there who brought me up to date on B/D as the accepted '/' indicator for PR.