Final Frontier is a slash Star Trek: TOS 252-page anthology. Both issues were dedicated to the memory of John Lennon.

This is to inform anyone concerned-that Pat Hutter is no longer co-editing 'Final Frontier'. I will be continuing the zine on my own and any correspondence at all, including that concerning artwork, should be addressed to me: Cynthia Drake. I would like to add that this decision was reached in an amicable fashion and that there will be no changes in the zine's content. [1] 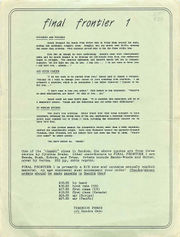 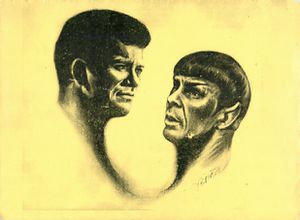 Final Frontier 1 was published in June 1982 and contains 252 pages.

Some summaries below are by Gilda F.

See reactions and reviews for Fucking the Light Fantastic.

See reactions and reviews for By Worlds Divided.

See reactions and reviews for Lesson on Yonada.

See reactions and reviews for ...And Never Parted.

See reactions and reviews for Galaxies in Time.

See reactions and reviews for A Shore Leave Together.

See reactions and reviews for Touching and Touched.

See reactions and reviews for Monsters in the Night.

The bulk of the material in this zine is K/S oriented, with some explicit scenes so an age statement is required. The metal strip fastener is not a favorite of mine, and that some printing or layout mixups occured was made obvious by the inclusion of a few pages with blank sides, but the zine is on balance nicely done with few distracting typos and clear print. Though not heavily illustrated, there is some good artwork included. The cover by Verina departs from his familiar pen and ink style to present finely shaded post-movie portraits of Kirk and Spock. There are two versions of [Gayle F's] print, with the second as my choice for solo display. Its larger dark areas make for better balance and highlight the intricacy of the design. Barbara Gordon makes several contributions, one of which is the best piece of hers seen to date. And Eric's Kirk is also noteworthy. The occasional decorative designs help distract the eye, but more such touches might be appreciated.

The quality of the writing is good on the whole, but a few things don't quite measure up. Surprisingly Ginna LaCroix's "Deja "Vu" is one of these. The back ground on Kor drags and the parallels between earlier encounters and the situation on Organia seem forced. There is also a shore leave short that flounders without focus in overlong narrative. But the better pieces more than make up for the few letdowns.

Toni Cardinal-Price introduces some novel notions into paradise in "Galaxies in Time." "The Magician" by Lee Owers is hauntingly powerful. A.T. Bush contributes two stories with a light touch, not too far-fetched. And there are several scattered pieces, primarily meditative interludes, placed in and around aired episodes to expand upon them. "The Breathing Rose" is a three part series of the personal thoughts of Spook and Kirk after their reunion in ST-TMP. The scattered presentation is distracting at first glance, but it does weave a subtle subliminal theme. By far the largest portion of the contents is contributed by Cynthia Drake, who possesses some real talent. Most of her perceptions are very close to the aired chajracterizations. And it is refreshing to see characters, particularly Kirk, not being drastically altered. Flashes of insight combined with a flair for dialog move the stories right along. Kirk is charming, witty, caring and very honest with himself, yet he is also at times impatient, angry or ill-tempered. Very human indeed. And only once is Spock placed outside the customary bounds of his character —in "By Worlds Divided", a very alternate, universe story which turns a more usual theme around to show a Spock who has been stripped of his identity and emotional controls by a mindsifter and subsequently held as a slave. Rescue by a Kirk he has never met opens up a new world to him and the relationship progresses from there.

The major story of the zine is Cynthia's novella, "Touching and Touched", which at 98 pages affords the author the scope to tackle a much neglected aspect of K/S literature—following up that "first time" to examine the adjustments necessary to accommodate these two strong personalities in an intimate relationship. Several areas of conflict are examined as they crop up and are dealt with. Definitive solutions are not always possible, for relationships change as those involved change and grow, but here Kirk and Spock are shown confronting them. The matter of trust, embracing' as it does aspect of insecurity, fear, withdrawal, jealousy and rejection, comes in for repeated attention. Response to outside pressures, mutual support, independence and the struggle to strike a balance of control in the relationship are also considered. There is still plenty of leeway for further speculation, but Cynthia is "definitely on the right track. I admit to not being totally satisfied by the too-pat solution to the mystery in which Spock and Kirk become involved as a sub-plot, but I believe the story achieves its main objectives remarkably well.

Overall I can recommend this zine. to those interested in the K/S theme even as it embraces a physical relationship. The thoughtful treatment of many of the stories provides a lot of food for thought which makes it worth the price. [2] 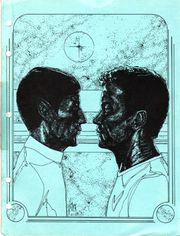 Final Frontier 2 was published in 1983 and contains 265 pages. Cynthia Drake was the sole editor. This issue was dedicated to the memory of John Lennon.

From a May 1982 submission request:

STOP PRESS: This is to inform anyone concerned-that Pat Hutter is no longer co-editing 'Final Frontier'. I will be continuing the zine on my own and any correspondence at all, including that concerning artwork, should be addressed to me: Cynthia Drake. I would like to add that this decision was reached in an amicable fashion and that there will be no changes in the zine's content. [3]

See reactions and reviews at In the Garden.

See reactions and reviews for Between the Devil and the Deep Blue Sea.

See reactions and reviews for Conquest.

See reactions and reviews for For Appearance's Sake.

See reactions and reviews for The Twelfth of Never.

See reactions and reviews for Jimmy Through the Looking Glass.

See reactions and reviews for Moment of Revelation.

See reactions and reviews for Temptations.

See reactions and reviews for The Poet.

See reactions and reviews for An Inhabited Garden.

[poem: Chrysalis]: The first thing I noticed about this poem it its choppiness. I don't normally like choppy style, but it's effective here. It gives the impression of images flashing the way an entire life flashes past someone drowning. This is exactly the sort of experience Kirk might have undergone post-TWOK. [4]

[poem: Rain]: I could pay the usual compliments about images and alliteration, but what really draws me to this poem is the theme of bringing life to the land. K/S isn't only a sexual relationship between individuals, but a sacred marriage of the elements of soil and water. This idea has great significance for me. [5]

[zine]: Brilliant by leaps and turns---I thought FF#1 was a true hum-dinger but issue #2 is of equal fabulousness, with some of the most notably gifted of our fandoms best authors, as welll as hot-hot-hot artwork by Gayle Feyrer and Suzan Lovett. Unfortunately Fanlore does not offer that Lovett illo. omg. coud NOT stop ogling, compellingly romantic...sigh. Cynthia Drake's monumental novella,The Inhabited Garden...good grief could any author offer such an authentic characterization of Kirk as well as Spock and most authentic of all, Bones? Sheesh, her narrative was so complex and so involved with just the right touch of suspense as well as a fitting tie-in with a familiar (and much despised)villain.I was completely blown away, also huge rec for The Devil and the Bright Blue Sea, by Lynna Bright, one of the most romantic, most credible endings EVER. Well worth the time to read, get lost in and enjoy! [6]

Submission Request for the Proposed, But Never Published, Third Issue

FINAL FRONTIER #3 is now open for submissions. Stories, poetry, vignettes are eagerly solicited. Double-space your manuscripts please unless sheer bulk makes that impractical, in which case single space will be acceptable, send sufficient postage for return, if that is desired - the same applies to artwork unless specifically commissioned by me. No death stories, stories where Kirk and Spock permanently break up, or stories involving children in sexual situations, please. Seventeen or up is okay. Material does not have to be sexually explicit, but must be based on the K/S premise. Artists drop me a line listing your strengths and preferences - xeroxed samples are good too.

To avoid a repetition of the delays which plagued the last issue, I will not be taking orders or sending out flyers until the zine is ready for the printer. If you send me a SSAE for publication information, expect to wait several months before hearing. Further ads will be posted in this and other publications. Typists are also needed: Send a s.s.a.e. for details, a free copy of the zine for helping out. [7]