April Valentine (the pseud used here on Fanlore) has been participating in fandom as a writer, convention organizer, and fanzine publisher since the late 1970s.

Artwork in April Valentine's published fanzines has been uploaded to Fanlore with her permission.

Like many of her peers, she began in Star Trek fandom, where she attended KScon (Kiss Con) conventions and co-wrote the controversial story The Rack.

Eventually, she moved on to Starsky & Hutch fandom in 1984: "Since I knew someone who was involved with S/H, I was loaned S/H zines and also saw my first song vids—named song tapes at the time....Soon I was participating fully, doing my own first slash zine, going to ZebraCon and moved wholeheartedly into SH fandom." [1]

While in Star Trek fandom, she published fanzines under the name Kalomi Press.

She published numerous Starsky & Hutch and Sentinel fanzines under the publisher Amapola Press, (later In Person Press) and several of her fanzines have won both FanQ and Stiffie Awards.

April also took over the publishing for Markate Press after Marion McChesney passed away.

I would, in general recommend ANYTHING that's been put out by April Valentine, including NIGHTLIGHT 1 and 2, any issue of THE FIX 2-12, MURDER ON SAN CARMALITAS (a novel by Lynna Bright; I'm not certain that this is still in print, though), and TLC (a hurt/comfort zine with a mix of straight and slash). Specifically recommended stories: "Sunshine Dreams" by MRK in THE FIX #6. This is the first in her "Clandestine Reports" series, all of which I recommend. I think that all of the subsequent FIXs had a segment in this series, some better than others, and there's also a segment in NIGHTLIGHT 2 and IT'S LOVE CAP'N (published by MRK, herself). Also, "A Bargain at Any Price" by Rosemary C in THE FIX #7. There is a sequel to this story, "Balance Due" in the next issue which is also very good, but I think the first story is better. [4]

A BNF for many reasons, her involvement in zine publishing wasn't always smooth. In the early 1990s, a number of fans became upset when the zines they had ordered, mainly from Amapola Press, were not delivered. See that press' page for more.

In the early to mid-1990s, she organized the first SHarecons, informal Starsky & Hutch fan gatherings in Baltimore, Maryland.

From 1999 to 2005, she also organized Connexions, a slash multi-fandom convention in Baltimore, Maryland.

During her Trek days, she was good friends with both Nancy Kippax and Bev Volker. In one of her reminisces, Nancy shared April's other talent: filking. "Our new friend, [April Valentine], had written a lovely 'filk' song. In case you don't know, or haven't heard, a 'filk' originated in science fiction fandom. It was when you took an established tune or melody, and wrote your own lyrics. [April] had taken John Denver's tune, "Take Me Home, Country Roads" and written Star Trek lyrics. It was called, "You're My Home, Enterprise." We sang it sometimes at our gatherings and we all loved it. Along with her husband, .... who had a great voice, and Kathy .... who also played guitar and sang, [April] formed a group they named 'Omicron Ceti III' – because that was the name of Leila Kalomi's planet in 'This Side of Paradise', and because there were three of them. There was going to be a talent contest at Bi-Cen Ten, and they decided to enter! [April] made them all matching shirts and they went on stage with a level of professionalism which was to stay with them for their entire performing career. Needless to say, they won, and the prize was $25. ....Back in our hotel room, Bev and I were throwing our first room party, and the jubilant winners were our star guests of honor! [April] and Kathy got out their guitars and we all sang along."[5]

Below is a listing of the fanzines that April has either published or that have featured her fan fiction. 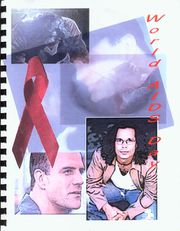 Aftermath | Beyond Orion | Companion Contact | Contact Christmas | Farthest Star | Final Frontier | Galactic Discourse | Gateway) | Guardian | Half You, Half Me | Immortal are the Dangers | Insatiable Curiosity | Legend's End | Mind Meld | Nome | Pastak| | Starborne | Starsong | Sun and Shadow | The Colors of Love | The Complete Rack | The Mirage | The Rack | The Rack & All the King's Horses, All the King's Men | The Time of Surak | The Turbolift Review | Thrust | T'hy'la | Vault of Tomorrow | Voyages | Whalesong

Bonaventure | Celebration | Code 7 | Convicted | Cops Need Love, Too | Day by Day | Distant Shores | Down to Earth | Half You, Half Me | If Love is Real: Addiction | Indigo Boys | It's Love, Cap'n | Lifeline | Moonlight and Mists | Nightlight | No Pants, No Badge, No Gun | Penal Code | Play by Playbook: Collected ZebraCon Plays | Shadowplay | SHarecon | Some Things Can't Be Fixed | The Fix | The Fix Collected | The Flame Trilogy | The Paul Muni Special | TLC | Wanna Share? | Whaddya Mean I'm Not a Good Kisser?