You may be looking for the K/S zine awards, TLC Awards.

TLC is a 172-page gen and slash Starsky and Hutch anthology. The initials stand (as they usually do in English) for "Tender Loving Care", which is the zine's subtitle. Inside is the dedication, "To anyone in Starsky and Hutch fandom who has ever listed "Coffin" or "Shootout" among their favorite episodes."

The cover by Merle Decker, other art by J. Jones and SVE. (The editorial notes that "artwork is increasingly hard to come by.") Proofreading was by Nancy Kippax, MRK, Ellen Morris and MJB. Collating was by Betsy Ramsey, Barbara Presgrove, Marilyn Hartsell, Nancy Kippax and SVE. Art samples are included on Fanlore with the publisher's permission.

A Long Time in the Planning

Submissions were first requested for this zine in early 1987. From Who Do We Trust Times #7:

TLC, planned for publication in winter '87, is seeking submissions of fiction with hurt/comfort themes. Stories may involve physical or psychological h/c, show Starsky and Hutch working as cops, take them out of L.A., or explore "scenes we didn't see" from televised episodes. S&H and S/H premise stories both acceptable. (If interested in receiving only "&" portion of zine, indicate when sending SASE.) Deadline for stories is mid-October, Zebra Con 7.

TLC: It stands for tender loving care, and that's the kind of fiction it will include. One partner caring for another, offering tenderness and love for the hurts, both physical and emotional, that life throws their way. S&H or S/H acceptable, just so the story has hurt/comfort - touching as a way of healing, of getting past barriers -- as its core. No publication date yet on this one; if you have an idea that you're thinking of working on, write and let's discuss it, as I'd like to have a balance between various facets of h/c included. Please include an appropriately sized SASE with all submissions and send to editor [April Valentine] at the above address.

Hurt/comfort took up a lot of space in those early SH zines [she mentions Zebra Three], but by the time I came into this fandom in 1984, the theme had, for some reason, gotten a bad name. Hurt/comfort was sublimated slash, hurt/comfort was immature writing,hurt/comfort's been done... I heard it all. Yes, many wonderful stories don't contain a bit of hurt/comfort. Many wonderful stories explore other themes engendered by the characters of Starsky and Hutch. And if you want slash, you don't need hurt/comfort to get there. But I still missed those thigh grabs as Starsky writhed in pain, those tender words of Hutch's: 'Buddy, I'm here.' Just as fourth season wasn't quite the same with episodes far divergent from 'Coffin' and 'Shootout'... fan fiction still had an element missing, at least for this editor. So, in 1986, I decided the time had come for another SH hurt/comfort zine. It didn't take all these years for the stories to come together, believe me. They came in at at steady pace. But since Amapola Press has been busy publishing a couple of other zines in the meantime, it did take this long for TLC to be ready... I've tried to select stories that portray all types of h/c: wounds, illness, psychological, the whole gamut.... Some of the h/c ideas are tried and true, some a little different, some stories don't even have the h/c solve the problems; there is definitely something there for everyone... Hurt/comfort, whether slash or straight, is a beautiful theme. In Starsky & Hutch, when one partner hurts, the other feels the same anguish. When one is in need, the other is there. With that in mind, enjoy TLC.

art for "Two of a Kind," artist is SVE 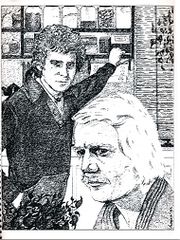 By 1992, desk-top publishing had made hand-drawn zine art increasingly very rare. This piece is by J. Jones for "Black and Bruised," an angsty tale taking place after the episode "Black and Blue": "Unconsciously, Starsky had been blaming his partner for the distance between them, noting only Hutch's withdrawal. Now Starsky found himself wondering what he might have done, or failed to do to initiate such a retreat. What act of his would have been bad enough to merit that amnesia stunt or any of the more bizarre games of recent memory?" [1]

[My Dream is Your Fantasy]: This story uses my favorite kink: the fuck-or-die scenario. Written well, it can be a hot premise. Poorly written, it is dreck and unrealistic. [MRK] has written the former with My Dream is Your Fantasy. The premise behind this story is that goons from Simon Marcus' cult (from the episode Satan's Witches) kidnap Hutch, later Starsky is caught also and the pair are forced into the fuck or die situation in retribution for the demise of their leader, Simon -- a Manson-like figure. [MRK] deals with the trauma and aftermath of this act in an emotional manner and it is not dismissed, as other fuck-or-die stories do. The only drawback is I felt the story ended too soon, I was expecting more of a resolution. But then, that could just be me. Otherwise, this story hits all my hot buttons. [2]

[Black and Bruised]: A rift has developed between the partners, and while Hutch has known about it all along, Starsky finally starts to take notice when he tries to help nurse his injured partner back to health. Originally published in the zine TLC, this is one of those hurt/comfort stories that just makes you turn angsty one moment and full of warm fuzzies the next. The author's writing style is one of my favorites to date. She manages to get everything in there, from perfect imagery to believable dialogue. [3]

[zine]: TLC was a delight. A couple stories seemed quite familiar to me — were they possibly published somewhere else before? Or perhaps my imagination just ran away with me. Either way, it's a joy to read... [4]