Contact Christmas is a sister zine to Contact. It is a gen anthology of fiction and art. There were two issues.

Sample art has been included on Fanlore with the permission of the publisher's heirs. 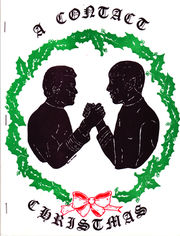 Contact Christmas 1 (archived here) was published in December 1979 (reprinted September 1987) and contains 94 pages. The cover art is by Russ Volker.

From the title page: "This issue is dedicated to the spirit of Christmas and the spirt of Star Trek -- in so many ways, one and the same. And to The Man who makes everything possible."

Three years ago, [April] had a bright idea. She wrote a Kirk/Spock Christmas story to share with her friends for the holiday. It was so enthusiastically received that the following year, we wrote a Kirk/Spock Christmas story to share with our friends. We thought it would end there. Musing on these two unpublished stories one day, we began to consider the prospect of putting together a special holiday edition of 'Contact.'... It's hard to believe we're going through this insanity again, only two months later, at a time of year when most people are combing the department stories for just-right gifts, baking cookies, and decking their private halls with boughs of holly, mistletoe, and plastic Santas. Believe it or not, we're doing all that, too -- while pasting numbers on pages, typing until 2 a. m., rushing to the printers and recording orders. But we feel the Christmas spirit as much in these latter endeavors as in the former. Love of Star Trek, the joy of the Kirk/Spock relationship, symbolize the true spirit of Christmas just as much as the tradition sentiments. Christmas is brotherhood, a hope for the future of mankind, good will, and family closeness -- and so is Star Trek. 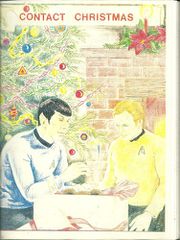 Contact Christmas 2 (archived here) was published in November 1987 (reprinted March 1988) and contains 242 pages.. The cover art is by Merle Decker.

Another zine I would like to mention is CONTACT CHRISTMAS II, editor Bev Volker. Anyone familiar with the CONTACT series would love it. I, being new to fandom, missed out on CONTACT, but Bev's Christmas book was fun to read. It is full of Christmas and seasonal activities on and off the ENTERPRISE, focusing on the Kirk and Spock friendship. One excellent story about them visiting Amanda on Vulcan for Christmas was written by Gina Godwin, who was recently murdered here in the Wilmington area. Another one of my favorites was by Bev Volker herself based on Charles Dickens' "A Christmas Carol." Guess who Scrooge is. [1]

It was not a K/S zine, but an anthology of loving stories centered around the Terran custom of Christmas. This being a K/S letterzine, I'm reluctant to review the stories one by one, but would like to relate a few examples of the kind of love we're talking about. The authors did not mean it as K/S, but surely they would not be offended that as a reader I realized from the very start that the stories portrayed love in its truest form. Nearly every author used a theme of putting the one you love before yourself. In one instance, Kirk risked his life to obtain a rare mineral/gem for Spock. This particular gem was never found except on Christmas Eve on a desert planet called Bethlehem. While searching alone in the dark of night, Kirk is injured when a sudden storm causes the land mass to shift. He is in grave condition. The glowing gem clutched in his hand as his life forces ebb, his only wish is that he had told Spock how much he meant to him, to have had the chance to give him the gem that was to be a token of how much he cared. Sacrifice of self. Spock senses the danger, and through the link, finds Kirk before he succumbs to massive loss of blood. But they cannot contact anyone for rescue. Spock's only wish is that Kirk not die alone. He initiates the meld that will draw him into death with his friend. Sacrifice. Other before self. I cannot tell you that much without revealing that they are rescued, and that Kirk has clutched the mineral deposit so tightly it has disappeared. However, it was never the token that mattered. It was the love. There are tender little moments of Christmas joy in this zine. Like seeing them sit up late in the evening stringing popcorn for the ship's tree. Like looking for the perfect gift for each other, something that will convey all that they feel for each other. One long story is very entertaining. It has all kinds of elements of excitement and danger, laced with liberal amounts of just plain fun and again, the pure and untouchable love that draws these men together. This is called "And To All A Goodnight" by Maggie Manlove. There are some beautiful passages I'd like to share as we all plunge into the madness of the season. Kirk has not reported for his shift and a shipwide search has been initiated without result. A suspicious Romulan ship is hovering nearby. A rotund elfish figure who keeps asking everyone what they want for Christmas has mysteriously appeared on the Enterprise. Up to now Spock has ignored his persistent and annoying questions to everyone about what they want for Christmas. He is in the command chair trying to formulate a plan of action. Think. Concentrate, he ordered himself. But the only thought that came to mind had nothing to do with his predicament. He knew what he wanted for Christmas! He wanted Jim...alive and well and on the Bridge, in command, where he belonged. More than anything else, Spock wanted to see his smile, feel the touch of his hand on his shoulder, and hear his gentle voice in his ear. Jim -- his friendship, his companionship -- was all he wanted now or would ever want. Later, after Kirk is found and has recovered from the effects of being drugged, the command team is in the rec room discussing the events that have besieged them. Spock's Christmas gift to Jim was a comm bracelet, which interfered some of the ship's functions and Spock is apologizing. Kirk says, "It wasn't your fault." Spock looked away, distressed. "Perhaps not. But...I wanted so much for it to be..." "Perfect?" Kirk asked gently. The Vulcan nodded silently, eyes still downcast. "Spock..." Kirk reached out and took his friend's warm hands in his own, squeezing gently, forcing Spock to meet his eyes. "There's something I think you should know about that bracelet, before you fix it." He explains the old adage that it isn't the gift that's important. "Do you understand?" Spock's warm brown gaze came to rest on their joined hands. "I...believe I do," he admitted haltingly. "When you were missing this afternoon, Jim, I was...we were...worried about you. There was no way of knowing whether you had been injured -- or worse -- until you were found. Kringle (the elfish alien) asked me what I wanted for Christmas...as though he knew that your gift meant nothing to me...without you." Kirk smiled and saw his smile reflected in his First Officer's eyes, and for a moment the two of them stepped into that other, shared universe that was uniquely theirs. The Christmas party swirled on around them, unnoticed. In conclusion, and in my opinion, both this special season and K/S are celebrations of love, making the season a perfect time to revel in all that K/S means to us. May your celebrations all be filled with peace, joy and Love. [2]