Treklink is a Star Trek discussion newsletter/letterzine that is split into sections for adult het and gen that focus on discussions and advice about fan writing. There are twenty issues.

The editor, Joan Marie Verba, describes the zine as: "A newsletter solely for the discussion of Star Trek fanzines and Star Trek fan writing. Send comments on stories you read. Even one-line comments are welcome -- formal reviews or formal locs not necessary." [1]

From an Introductory Flyer

Although I don't expect to have to do this very often, I do reserve the right to edit or reject contributions. I'm sure that 99% of the contributions I receive will be publishable, and I hope that the readers of this newsletter will be understanding about the other about the other 1%. If I do not wish to print a contribution, I will try to send it back with a note of explanation.

Taste. I will reject any contribution I consider to be in poor taste. Although I occasionally use four-letter words in my conversation, I won't print obscene language. Nor will I print anything I consider degrading to an individual or group of individuals.

Other guidelines. I will print both favorable and unfavorable comments. I am aware that there is some sentiment that one should only write favorable things about fanzines or stories, but I am not of that opinion. I may, however, return criticisms that I feel are relentlessly harsh.

Please restrict your comments to fanzines that are still in print so as to not frustrate subscribers who might want to read the story you comment upon.

All contributions should be signed with your real name. If I suspect someone is using a pseudonym, I'll return the contribution. I will withhold name or address upon request if the comment is favorable to a fanzine or story. Unfavorable comments will be printed with a name and address or not at all.

Because DATAZINE and UNIVERSAL TRANSLATOR already accept letters of complaint about unfilled orders from editors, I will not duplicate their efforts.

Until I receive them, I won't knew whether I'll get any letters on adult (i.e. fanzines requiring an age statement) material or not. If I do get such comments, however, they will be printed on a separate page(s), and that page will be mailed only to these subscribers who request the page, and those subscribers must provide an age statement. This, I think, will be fair to those who read such material as well as those who choose not to. I myself do not confine my reading to "G" rated material, so I will accept comments on any fanzine.

FREQUENCY OF PUBLISHING: This will depend on the response. If there are a small number of contributions, this will be a quarterly publication (July, October, January, April). I will do a special Fan Q issue in January to reprise fanzines and stories of the previous year to aid in nominations. If there are a large number of contributions, this publication may be bi-monthly, if I can manage it. If I get no response, then I will stop publication.

Feedback. This is my 15th year in Star Trek fandom, and I can say wtihout a doubt that for many years fan editors and writers have complained about lack of feedback. Fanzine reviews seem few and far between, even with the all-review issues of DATAZINE, and the frequent reviews in UNIVERSAL TRANSLATOR. Fanzine review zines have been tried and have failed for lack of input. LoCs (Letters of Comment) are hard to come by since some fanzines are one-shots and therefore have no opportunity to print them, and some come out so irregularly that the stories are forgotten by the time the LoCs are published. In order to fill this gap, and to get more feedback for writers and editors, I'm opening this publication up for comments. Contributors to this fanzine do not have to submit formal reviews or formal LoCs. Informal contributions and even one-line comments are welcome. I hope by this method to get more comments on more stories.

Awards.. Unfortunately, I left the 1985 Media*West convention before the discussion of the Fan Qs began. However, I was at the 1984 discussion, and was alarmed at the fact that there were barely enough nominations that year to warrant a separate category for Star Trek. I consider myself partially at fault because.I do not nominate most years because I simply can't remember the outstanding stories for the previous year. I often wonder if other fans, too, have the problem of either not remembering or not being aware of stories that might be nominated. (By the way, anyone can vote on the Fan Q awards now—it is no longer limited to Media*West members.) Therefore, I encourage contributors to this newsleter to send in comments on their favorite stories or fanzines so that more people can be aware of them. Which brings me to

Recommendations.. I strongly encourage recommendations. Anyone looking through issues of DATAZINE or UNIVERSAL TRANSLATOR will see that the list of Star Trek fanzines seems endless. It is a general feeling among fanzine readers, according to my experience, that we want to read all the good stories we can, but sometimes we don't know where to find them. In particular, it is quite possible to miss a story in a "mixed media" fanzine, which might have only one or two Star Trek stories in it. So please send in your comments on your particular favorites.

I had considered editing a fanzine of this sort for some time, but waited for someone else to publish one. In the process, I saw many 'fanzine review' issues come, last a few issues, and go. Then, at MediaWest that year, I found that Star Trek almost did not receive sufficient nominations to put it on the Fan Q ballot, so in order to stimulate interest in Star Trek fanzines and keep the category alive, I finally took the plunge. I put out Treklink 1 in the summer. I wrote the entire contents, and set out my editorial policy. Because I knew a lot of fans did not wish to read about explicit material, I split Treklink into two sections. Fans wishing to receive section 2 would have to send in an age statement. About 90% of the subscribers got both sections, but I thought I kept everyone happy that way. I put out Treklink 2 in October. This issue ran 5 pages reduced offset, including section 2. Fans wrote in and recommended Kin of the Same Womb Born for a Fan Q, even though it had been published in 1984 and its eligibility had expired. Many fans were to make the same error; Kin of the Same Womb Born got on the ballot for the best Star Trek story, and Rosalie Blazej got on the ballot for best Star Trek writer; unfortunately, both had to be withdrawn.[2]

Stephen, Joyce and I have made it a policy to not review fanzines ourselves In DATAZINE. We didn't want to-be accussed of favoritism or worse, However, every once In a while an idea or publication comes along that I would like to highly recommend to the readers of DATAZINE. TREKLINK is one such pUblication, Joan Verba is the creator of this newsletter whose purpose is to provide an open forum for discussinq Star Trek fanzines. She would like to provide a publication that will fill a void now existing concerning fanzines. As Joan states in her editorial "In order to·fill this gap and to get more feedback for writers and editors, I'm opening this publications up for comments. Contributors to this fanzine do not have to submit formal reviews or formal LoCs. Informal contributions and even one-line comments are welcome. I hope by this method to get more comments on more stories." TREKLINK is open to any and all discussions of Star Trek writing. The first issue is FREE and I hope that you will all check this new publication out and send Joan your comments and ideas.[3]

This is a fairly new (issue #5 came out in 7-86) quarterly fanzine devoted to the reviewing and discussion of fanzines. It comes in two parts: 1) a general Trek section and 2) an adult section for those fanzines requiring an age statement. You must request section two and provide an age statement when ordering to receive both sections. Discussion in both sections is lively. Information is well-organized and easy to read. As a fanzine fan, I find this indispensable.[4]

I'd like to alert everyone to a fairly new letterzine called TREKLINK. It is just for the discussion of ST fan writing. So far, three issues have been published, and although they are fairly thin, a super idea like this is bound to catch on rather quickly within fandom. Issues 1&2 may be had for free by requesting them with a double stamped SASE. Subscriptions starting with #3 are $2 for the year! They do print reviews of K/S and other adult zines, but in a seperate section which must be requested (at no extra cost) with an age statement. Only reviews of current zines will be accepted. Also, short comments, ideas and opinions are welcome, so nO one need feel intimidated by the thought of writing in-depth reviews for everything.[5] 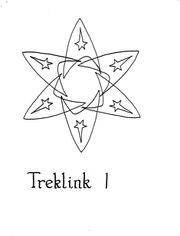 TrekLink 2 was published in October 1985 and contains 5 pages. 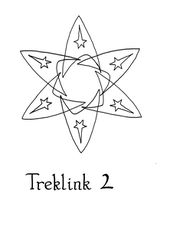 TrekLink 3 was published in January 1986 and contains 6 pages. 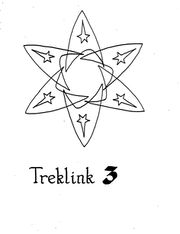 TrekLink 4 was published in April 1986 and contains 8 pages. 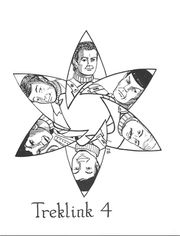 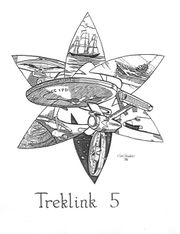 TrekLink 6 was published in October 1986 and contains 12 pages. 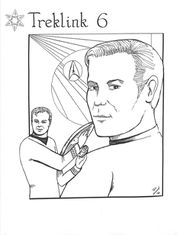 TrekLink 7 was published in January 1987 and contains 11 pages. The front cover is by Rich Katuzin. 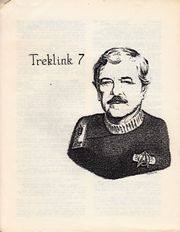 TrekLink 8 was published in April 1987 and contains 11 pages. The front cover is by Tom Howard. 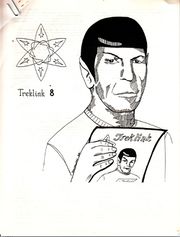 TrekLink 9 was published in July 1987 and contains 11 pages. 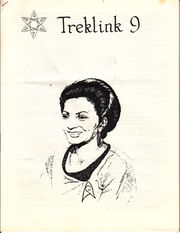 TrekLink 10 was published in October 1987 and contains 11 pages. The back cover, the only full back cover art in the series, is by Jacqueline Zoost. 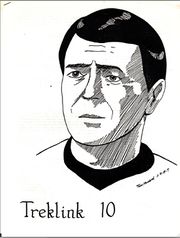 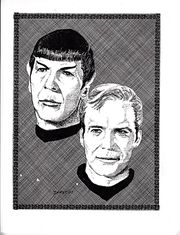 back cover of issue #10, Jacqueline Zoost

TrekLink 11 was published in January 1988 and contains 8 pages. The editor notes that the zine now has 100 subscribers. 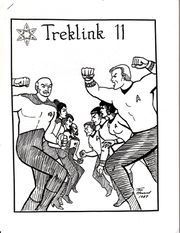 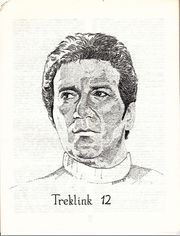 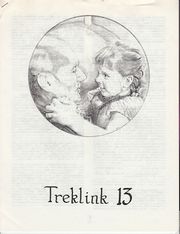 TrekLink 14 was published in October 1988 and contains 13 pages. 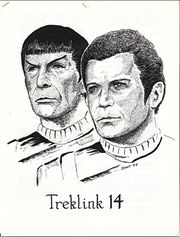 TrekLink 15 was published in January 1989 and contains 9 pages. 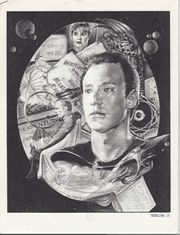 TrekLink 16 was published in March 1989 and contains 8 pages. 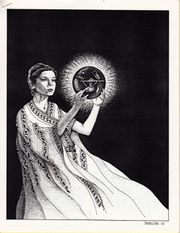 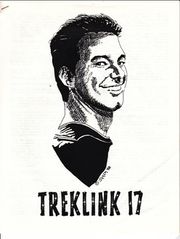 TrekLink 18 was published in July 1989 and contains 6 pages. 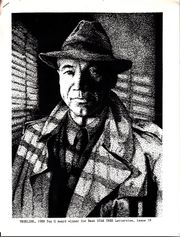 TrekLink 19 was published in September 1989 and contains 5 pages. 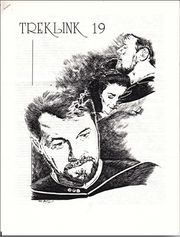 TrekLink 20 was published in November 1989 and contains 8 pages. As of this issue, there were 146 subscribers. 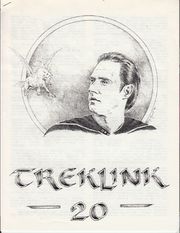