Revenge of the Wind Rider 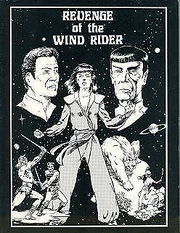 Revenge of the Wind Rider is a gen Star Trek: TOS 145-page novel by Roberta Debono. It is a prequel to The Dragon's Claw. Art by Ken Hooper, Ken Debono, Carson Hardacre.

A flyer says that "Leonard Nimoy gave his permission for his poetry to be quoted in this story."

From the publisher, this zine "features the original crew of the U.S.S. Enterprise, and introduces the characters of Young Star Fleet. The story takes the immortal characters on a voyage that affirms the Star Trek dream: humanism, courage, love, the search for knowledge, and the willingness to understand what is different or alien, without blasting it out of existence. It is an allegory of hope and renewal."

From the zine: "From the deck of a captured Klingon warship, Saavik watched the planet Genesis explode into flames and knew that while the body of David Marcus was consumed in that fire, she had brought away a part of his being ... his unborn child. Now, eight years later, their son Daniel must undergo a Vulcan coming-of-age ritual into a nightmare valley of monsters and madness." 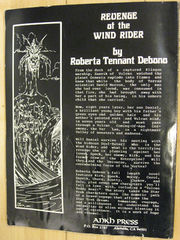 I have a true trek tale to share with you. I am 43 years old, and have long since lost touch with all those I went to high school with. I ordered WIND RIDER mostly because it is published in my home town.

When I grew up there, I was, as far as I knew, the only fan for miles and miles around. In the 1980's, the SF Bay Area is a metropolis of SFWA members and a haven for the dedicated fan. But that didn't happen until years after I moved away. Yet, still, Alameda is not a town famous in Trekdom. So I was curious - just idly curious - to see what else my home town had spawned. I exchanged a few brief notes with Debono before I finally got WIND RIDER. And we discovered that we had gone to the same High School - and lo! - had been in the same class. In fact, upon exchanging patronymics, we discovered we had known each other - not well, but by sight. Then I read WIND RIDER - and discovered a kindred spirit. If ST had been on during our HS years, she and I would have started the school's ST club -and probably a zine or two. But alas, we missed those wonderful years by a decade. Let me tell you about REVENGE OF THE WIND RIDER. It is, I must warn you, horridly overpriced. It is not a novel. It is at the most 48,000 words, and the very minimum wordage for a novel is 50,000. Host paperback novels costing $2.95 run about 75,000. The story does not quite make novel structure either - but it should have. The material is there, but it's not realized fully. In other words, this is not professional level work. And that is the only quibble I have with it. And who can complain if a fanzine isn't professional? Other than the sense of disappointment that I didn't get my money's worth, I was ecstatic to discover that trekdom has now been graced with a glorious piece of fantasy. Not only that, but I've discovered a new fantasy writer. WIND RIDER has the lyrical feel of unicorns, misty woods, and gayly dressed maidens laughing. It does not feel real, but it does feel very pleasant. It is a story set after the three movies by about 8 years, and involves the great friends of the Big E in an adventure to save their children - who also become friends. The one premise I found startling was the idea that Saavik was in fact Spock's daughter by the Romulan Commander - but accepting that (which isn't so hard to accept), one sees immediately the poetry in how Saavik and Kirk's son David could have lain together to engender a son on the Genesis planet (off screen, of course). This gives Spock and Kirk a 7 year old's coming of age rite (for some odd reason, not Kas Wahn). Through the adventures of the rescue, various of the painful losses we saw endured on screen are remedied, and much of the trek universe is restored to us as it would have been had there not been tragedies. It is a dream made real, and for the short time it takes to read this story, it feels real enough. This is one of the few 'zines that takes you on a fantasy trip into a pure, good, and shining trek universe - pilots you through furor with intricate symbols that do not seem like symbols as you read. It is a marvelously well executed piece that might have made an episode for the TV show, except that it gets into relationships a bit too deeply for tv. There is no explicit sex, nothing to offend. There is love, romance, and family ties - but I didn't find It too "sweet." (However, I like my fantasy with lots of sugar.) I found some of the ideas of who married whom (or what) to produce which sort of children to be insufficiently documented, but with effort I could accept them.

The happiest thing, I think, is that I've found a new writer, who three or four novels up the road, may be a list leader in the professional ranks. Here is raw, unschooled talent, and unfocused power. She can even plot. The only skill lacking here is the ability to develop a plot fully and in depth. Her action scenes don't work well for me -but then I can't write action, either. And I usually skip reading them anyway. I don't know that I have anything I could teach my former classmate about writing. I'm eager to see what she'll do next. [1]

I just read Revenge of the Wind Rider, from Ankh Press, and written by Roberta Tennan Debono. It was great reading for its creativity, skillfully patterned plot, and mystical flavor. There was a lot of adventure, heroism, inspiration and emotion. The writer has a vivid imagination and writes well. (No age statement required.) It's very difficult to write such a long story, much less think it up to begin with. My thanks to Roberta Debono for taking the time, and caring to create a story that was as well written in the last half as the first. I'll be looking for more from her. [2]