You may be looking for the The Romulan Commander (male). 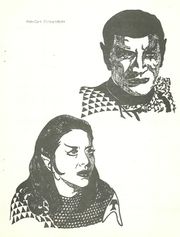 The two unnamed male and female Romulan commanders never appeared together on-screen, but here they are sharing a page in Despatch #22/#23/#24 (reprinted in a slightly different format from T-Negative): artist is Anthony Tollin

The Romulan Commander is an unnamed female character in the Star Trek: TOS episode "The Enterprise Incident". She is one of the most intriguing and fannishly-imagined characters in Star Trek and is featured in many fanworks.

We've certainly seen more beautiful women on Star Trek, but our nameless Commander proved more powerful than T'Pring ("Amok Time"), much sexier than Leila ("This Side of Paradise"), and more persistent than Nurse Chapel (in almost all episodes). She not only seduced Spock, but she got him to enjoy it as well. Will we ever forget those passionate scenes in her bedroom? [1]

One of the earliest speculations on her first name was in December 1968, about five weeks after the show aired in the U.S.: "Just out of curiosity — a good Vulcan trait — what do you think would be a good name for the Romulan Commander in "The Enterprise Incident"? If you have a name for her, send it in and we'll print a list next issue, just for the logical mental exercise of it. (How about Dicifontana?) [2]

Fan Fiction About the Romulan Commander 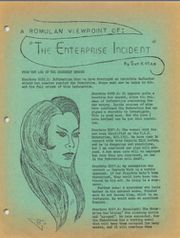