You may be looking for Grup or Grope.

Grip is a gen multimedia anthology of fiction, art, poetry, and commentary edited by Roberta Rogow.

There were 51 issues published.

The series had an emphasis on Star Trek and Star Wars.

Rogow created this zine series to encourage and highlight fans who did not have a lot of previous experience creating fanworks.

Rogow was very out-spoken in her her mission to keep "Grip's" material G, or mildly PG, rated, and the title, "Grip," was a poke at Grup, a sexually explicit Trek zine.

Some regular features were the editorial ("The Editor Shoots Her Mouth Off"), fanzine ads ("Backscratching Department"), and letters of comment ("Air-LoC"), the last two spelled a variety of ways.

Enterprise Reprise is a zine of reprinted content from Grip.

The art samples are included on Fanlore with the publisher's permission.

See these subpages for details about the individual issues.

Description from the Editor: 1985

Even as far back as 1978, there seemed to be a higher and higher standard for writers of fanzines to shoot for. Where could a beginner begin? GRIP was my answer to that question, and it still is, seven years and twenty issues later.

GRIP was meant to be a fanzine for 'new writers' to try out their ideas in fanzine writings. (I've been asked about the title, and the only way to explain it is to say that it was originally a joke...I had made a costume that was supposed to be a fanzine which opened out into a semi-nude Spock centerfold. Since there was a fanzine at the time that specialized in R-to-X-rated stories called GRUP, I used GRIP as the title for this costume. When I decided to edit my own fanzine, I took the title from the costume which had taken the title from the other fanzine...understand?)

GRIP has had very few restrictions, other than the obvious ones about Sex (nothing you couldn't show on Prime Time TV) and Violence (ditto, although I'm a lot stricter than the 6 o'clock news.). I've run stories that were extensions of various episodes of STAR TREK, or that used Klingons or Vulcans who were not connected directly with anyone in the episodes or the movies. I've used material based on STAR WARS, BATTLE BEYOND THE STARS, MOONRAKER, BATTLESTAR GALACTICA, and whatever else takes my fancy. I've use poetry, reviews, and at one time I even had a "Letterwar" between two engineering fanatics who tried to explain the Warp Drive! [1] 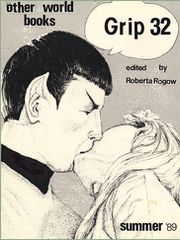 a parody: "The next time Roberta asked for a cover for her fanzine, Grip, I did a picture that, logically I thought, involved some gripping. For some reason she was surprised. This is one of my few, largely disastrous experiments with zip tape. I'm just not good at taping..." -- Teegar [2]

From the editorial in issue #1:

And now, the final question -- why call it GRIP? Well!!!! Once upon a time, in a galaxy far, far away, there was a fanzine called "GRUP", which printed several interesting (and sexy) stories. At a certain Star Trek Convention, I appeared at the Costume Call as a Fanzine, and took for the title of this item "GRIP". Naturally, when it came time to print my own fanzine, there was only one thing to call it!

From the editorial in issue #50:

People have asked about the title of this fanzine. It all began with a fanzine called Grup back in the mid-'70's, which ran some pretty steamy stories (for the mid-'70's...they'd be considered tame today). I got a trifle steamed about this, and when I get steamed, I DO something. In this case, I did a costume...a fanzine, with a nude, reclining Spock centerfold. I took this around to the various Star Trek Cons, and won a prize or two with it. The title of this spurious fanzine was...GRIP. So...when I decided to do a fanzine of my own, I called it after the costume, which was a parody of another fanzine. By the way, GRUP died after five issues. GRIP is still going strong. There's a message in there, somewhere.[3]

The big laugh-getter was my mother, in a costume that was supposed to be a Fanzine. She went onstage, opened it to show a nude Spock center-fold, and uttered one of her famous puns: 'My friends told me to get a Grip on myself, so I did!" [4]

Roberta Rogow's fanzine 'Grip' emphasizes a close adherence to the forms of the original source products in serious stories and a high percentage of playful and humorous stories.[5]

This zine series, as well as zines in general, slash, cross universes, and fanfic, was a focus of a December 12, 1988 two-page article in "The New Yorker." See Editor (1988 New Yorker article about zines).

"Grip" is a zine -- a collection of photocopied stories and pictures, staple-bound is a colored-paper cover. Since many of the stories in zines regularly include characters named Spock, Kirk, Scotty, and Dr. McCoy, people who mostly read what zine editors call "general-media zines" might get the idea that the zine phenomenon is simply the literary expression of Trekkiedom. But this is as wrong as wrong can be. For the zine writer, "Star Trek" just gives you a framework, a way of beginning," Ms. Rogow says. "A good zine writer might begin with "Trek" characters the way a Greek bard might have begun with the same old crowd of gods and heroes. But then you go beyond. Working with someone else's characters is a way of finding parameters for storytelling. It teaches you what you can never learn in a creative-writing class. It's only through the 'Trek' characters that you can find your own voice. When young writers want to begin with original universes, I tell them, 'First, write a "Trek" story. Before you let your imagination run wild, write about what you know."

She goes regularly to the cons, which have a heavy concentration of Trekkies, but does so with mixed feelings. She regards herself not as a Trekkie but as a Trekker, and often has to explain to twelve-year-olds the difference between her enthusiasm for "Star Trek" and their enthusiasm for "Star Trek." Most zine writers and editors are women, Ms. Rogow said as she sat behind her table. "Women could get involved in 'Star Trek.' They played a much larger role there than in any other series. After all, with Lieutenant Uhura, there was a woman on the bridge. Nowadays, young women say to me, 'O.K., but all she ever got to say was "Captain, I've lost contact with Star Fleet" or "Captain, contact with Star Fleet has been restored!" But in 1966 just to have a woman in contact with Star Fleet at all was a breakthrough. When 'Star Trek' was cancelled, in '69, all of us were lost. There were so many plot lines that were never resolved. So we began story trees, working our way up from premises and situations that had been left hanging in the show, and the zines eventually had a universe of their own. In 1977 came the second revolution—a whole new universe to play with. The story goes that the minute the first clips of 'Star Wars' were shown at the cons, fans started writing stories. Then came Indiana Jones, and that opened up other new worlds for writers. Anyway, it was around then, what with all those universes to play with, that I took up the cross-universe story, which is my forte and what I'm famous for. Cross-universe involves taking characters from one universe and mixing them with the characters from another. The crew of the Enterprise has an encounter with Han Solo in hyperspace. Or Darth Vader travels in time and meets Karen Allen.[6] But you have to do it consistently. For instance, Indiana Jones is presumably a historical figure, alive at a particular time. So it's best to cross him with figures from the same time period. A friend and I wrote a story -- it's a classic, if I say so myself -- where he was careering [7] across North Africa with Noel Coward.

[An eleven-year old boy] reached out for a zine at the back of the table. On its cover were a drawing (an "illo" in zine jargon) of Mr. Spock stripped to the waist and the legend "Spock Enslaved".

Ms. Rogow snatched it out of the boys had. "Get out of here! Go away!" she ordered. "That is not for the young."

She sighed, and said "Spock Enslaved" is an erotic zine. It's not really a slash book, but it's part of the same movement, which is threatening the zine universe. You see, in 1976 a story called "Shelter" was published in a zine called Warped Space. It was written by Leslie Fish. It's about Kirk and Spock. They on an uninhabited planet, they're trapped, they're in a cave, and well, there you go. There were others, and the thing took off. Spock and the Captain, Spock and the Doctor, The Doctor and Scotty.[8] But they're mostly about Spock seducing Captain Kirk -- that's whey they're called "K/S," or slash, zines. The slash books are basically harmless. People think that they are gay pornography, but they're not. They are written by women, for women. They're really Harlequin romances within the conventions of "Star Trek." Instead of having a name like Angelique, and a heaving bosom, the heroine just happens to be an admiral for Star Fleet. It's still the same girlish romantic fantasy. What the girls forget, though -- and this drives me into ferocious arguments -- is that Spock is sexually active only once every seven years. I've been arguing this one out for the last decade. That is clear -- that is unmistakable. He may be a gay Vulcan. He may be a straight Vulcan. I'm open-minded on that. But the one certain thing we know about all Vulcans' sex life is that they are sexually active once every seven years. When you ignore a rule like that, it seems to me you're not writing literature any more.

I've just published a cross-universe story in which one of the lawyers in "L.A. Law" goes to a con and picks up some slash fiction. Now, that's zine writing -- not some sexual encounter on an asteroid. People haven't even begun to touch on the possibilities of cross-universe writing. I'd like to cross "Beauty and the Beast" with this new series "Tattinger's", or have the cast of "Cheers" open up a bar on the Enterprise. Keep crossing long enough, and eventually you could write about anything. Eventually, you could capture the whole world in a single zine.