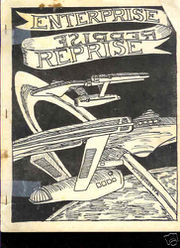 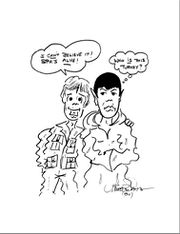 back cover by Mike Smith

Enterprise Reprise is a gen Star Trek: TOS 115-page anthology of the best stories that had originally appeared in issues of Grip.

The editors writes at some length about the history of the Star Trek show and of its cancellation, of fandom, and of Grip (the zine of which these stories were reprinted):

While the network executives pondered, the fans took over. So, there would be no more new adventures,eh? Well then...THEY would make their own! And they did...in those self-published magazines called 'fanzines'. Beginning with Spockanalia, published by Devra Langsam in 1966, and even unto the present day, amateur writers and artists have been inventing their own voyages 'where no man has gone before'. They have tried to extend existing episodes, or explain what led up to a particular episode, or have inserted their own characters into the crew of the Enterprise. They have found romance for Captain Kirk, and philosophy of Vulcan for Mr. Spock, and newer and better diseases for Dr. McCoy. They have created Aliens, and written their own histories of Klingons and Romulans. In short, the fan writers and artists are keeping the STAR TREK legend alive.

Thanks to fannish efforts, there have been three STAR TREK movies, with another on its way (as of tnis writing). STAR TREK conventions continue to draw sizable crowds. And the fanzines keep rolling along. I got involved in this madness in 1973, I had watched STAR TREK since its first season, but I hadn't known about Fandom, or Conventions, or fanzines... until I ran into a fellow-librarian at a Library Conference, who was also involved in one of the first convention committees. She told ne about conventions. I went, I saw, and I was hooked on fanzines...and when I saw a flyer from someone soliciting stories, I sat down and wrote one. Here, at last, was an outlet for something that I had been doing all my life (ever since I picked up a crayon at age 5 and scrawled my name). I found a whole new world of friends Out There; they read my stories and wrote to me telling me what they liked and what they didn't, and how to make things better. The next step, of course, was to edit my own fanzine. Even as far back as 1978, there seemed to be a higher and higher standard for writers of fanzines to shoot for. Where could a beginner begin? GRIP was my answer to that question, and it still is, seven years and twenty issues later. GRIP was meant to be a fanzine for 'new writers' to try out their ideas in fanzine writings. (I've been asked about the title, and the only way to explain it is to say that it was originally a joke...I had made a costume that was supposed to be a fanzine which opened out into a semi-nude Spock centerfold. Since there was a fanzine at the time that specialized in R-to-X-rated stories called GRUP, I used GRIP as the title for this costume. When I decided to edit my own fanzine, I took the title from the costume which had taken the title from the other fanzine...understand?)

GRIP has had very few restrictions, other than the obvious ones about Sex (nothing you couldn't show on Prime Time TV) and Violence (ditto, although I'm a lot stricter than the 6 o'clock news.). I've run stories that were extensions of various episodes of STAR TREK, or that used Klingons or Vulcans who were not connected directly with anyone in the episodes or the movies. I've used material based on STAR WARS, BATTLE BEYOND THE STARS, MOONRAKER, BATTLESTAR GALACTICA, and whatever else takes my fancy. I've use poetry, reviews, and at one time I even had a "Letterwar" between two engineering fanatics who tried to explain the Warp Drive!