Randall Landers has been writing Star Trek fanfic since 1977 (a story in Grip #4) and published his first zine, Stardate in 1979. He has been publishing zines as Orion Press since.[1] 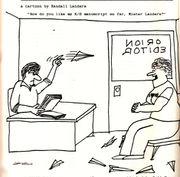 cartoon from Sensor Readings #2, Randall in his office with another fan

Lander's Opinion on Some of TPTB

Randall has some strong opinions about the value and prevalence of fandom and how TPTB has given conflicting messages, and why Star Trek pro books fail:

Randall answers the question: Why did Orion Press drop all of its non-Classic Trek material from the website?

Answer: This was not an easy decision for me to make, and it hurt a lot of people's feelings, including some very dear friends. Long time readers know that we have published 152 non-Classic Trek fanzines over the years from 1987 until 2001 (that's slightly more than the Classic Trek zines we published, especially if you discount the reprint anthologies). We sold more copies of those 152 non-Classic Trek fanzines on average than our Classic Trek fanzines, got more acclaim and won more awards for them, and were even recognized as THE fanzine source for Next Generation and Voyager zines. But in May 2001, Voyager's producers (Berman and Braga) unleashed the series finale, "Endgame," on fandom, and I sat there, stunned in complete disbelief, at how fans had been crapped upon by Rick Berman and Brannon Braga (something they would do again in the Enterprise series finale and in their last Star Trek film, Nemesis). I made the decision then and there to shut down our non-Classic Trek operations. I gave everyone notice to save their TNG, DS9 and VOY stories to files (many did, many more did not), sent all the TNG, DS9 and VOY zine masters back to their editors (none of them really kept their zines going), and basically I divorced myself from Modern Trek. Oh, it pissed off some friends of mine who felt that I had somehow betrayed them, and while I can't understand that, I do feel for them. None of them really seemed interested in trying to keep their zines going; they had come to rely on Orion Press to publish all their stuff. I, however, decided to not only maintain our Classic Trek website, but to expand it further.[3]

Randall answers the question of why he was called "grand poobah" by some Deep Space Nine fanzine readers:

Long time readers were aware that our Deep Space Nine offerings were few and far between (only 19 of them), and we practically shut them down in 1997. I had gone through too many editors for our DSN fanzine, Outpost, and one of them in particular had simply exhausted my patience. She wanted Orion Press to serve as her personal vanity press, and she wanted to publish the stories simultaneously in print as well as on-line. [4] The simple economic fact of the matter is that fanzines need to pay for themselves (fanzines never make money), and posting the stories limits the sales of the zines. She demanded the "right" to post her fan fiction to her own website, and I told her she had to wait for a year before doing so. Well, she nicknamed me "the grand poobah" or some such nonsense, and kept posting her material to her website anyway. This is one of the things that kept driving her zines' sales down, and she kept driving away contributors. She finally left us and took some of her koolaid-drinking followers with her. We even released some of her zines back to her because they simply never sold. Anyway, Laura Taylor (who is probably one of the most talented writers ever to grace our staff) convinced me to keep Outpost going for the next three years, all the way to the point in 2000 when I made the difficult decision to cancel all our non-Classic Trek offerings.[5]