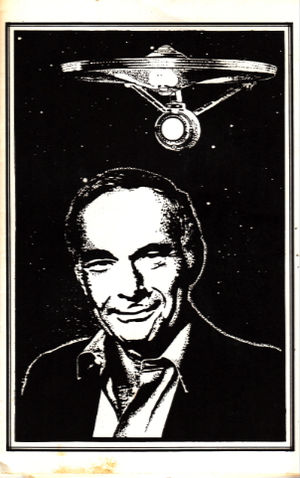 cover of Interstat #72, artist is Eric A. Stillwell

Harve Bennett was a very active TPTB, attending and speaking at conventions, answering personal letters, sending comments and letters to be published in Interstat, hosting some fans' visits to the Star Trek sets, sometimes calling fans at home, and visiting them in the hospital.

He had big shoes to fill, those of Gene Roddenberry, and the tightrope he walked was a tough one. Bennett also became somewhat of a flashpoint for fans and fears that Paramount would tease them and not be truthful in promises regarding the Star Trek movies. Bennett himself appeared to both tease and be upfront about production details, and his every word was analyzed.

To many fans, he represented a change from the Gene Roddenberry-controlled Star Trek, and they felt him to be somewhat of an interloper. A number of letters by fans in Interstat reflected this "choosing teams" attitude. Other fans adored Bennett and his personal touch.

To some fans, Bennett's closeness to fandom was a plus, one to be celebrated and encouraged. Many fans' letters expressed delight that they had the ear of those in charge of Star Trek's future and addressed directly addressed them in their communication. To other fans, Bennett's closeness to the fan community was troublesome, and they mostly blamed the undue influence on true fannish discourse that having someone official listening in would foster.

To you, to INTERSTAT, and to all the incredible STAR TREK tans who have been so generous in their praise of our work, my deepest thanks. Your post- opening edition is a collection of opinions I will treasure always. The level of perception of the inner meanings of the picture (sometimes intentional - sometimes not) staggers me. What a privilege for a filmmaker to have an audience that pays attention. I wish I had time to answer each of the hundreds of questions perceptively raised (and also to look stupid on a few questions I don't have the answers for).... Please publish this. It will be my way of thanking thousands of people I have been unable to personally reply to. And publish it for another reason: I would like it known to all who read this that it was here, in these pages, a long, lonely time ago, that a voice of reason first surfaced amid the wailing of the lost tribe, and said: "Cool it, guys. Let's give the new kid a chance to show what he can do." [1]

To All My Friends At Interstat: Today I leave Paramount, completing my ten year mission on STAR TREK. I wanted to thank you all for your support, your friendship, and your love during the decade we have shared. You. are without doubt the finest and most loyal audience a filmmaker could have. I am very proud of what we achieved while I was Chief of Staff of the feature division of Gene's Dream. I am particularly indebted to Nicholas Meyer, Ralph Winter, Leonard Nimoy, William Shatner and David Loughery, my comrades in close collaboration. My only regret is that I was unable to bring to the screen the STAR TREK I believe could have been our best. Our final draft script was called STAR TREK: THE FIRST ADVENTURE, and it dealt with Kirk's return to the Academy and his memories of life, love, and how it all began. It was a beautiful story. It had nothing to do with the"Police Academy" trash tag that unknowing people labeled it with. My only disappointment after ten years of proving my abilities to you all is that there were some of you who engaged in a letter campaign to destroy a work of art on hearsay evidence. I think I deserved more trust than that. To Dixie, my thanks for the accuracy of her clippings and the depth of her caring. To Rhea, my forever thanks for being first fan to write me a letter of support. And to Teri, who has been my friend 200% of the time, my gratitude always. Beam me out, Scotty.

Bennett, in Art and Letters

See: Where No Producers Have Gone Before (December 1982), a letter written by the editor of Interstat.

See: Anatomy of a Letterzine, which took issue, among other things, at a perceived too-cozy relationship with Interstat and its readers.

See: An Open Letter to Harve Bennett... In Fandom's Defense (March 1990), a letter in response to his farewell letter.

See: Harve Bennett's Farewell Open Letter (June 1990), which contains many, many comments by fans about him, as do numerous issues of Interstat.