From Fanlore
(Redirected from SpaceTrek)
Jump to: navigation, search 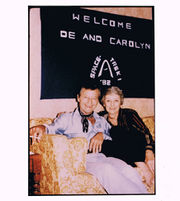 Space Trek (Space-Trek) was a fan-run Star Trek convention held in St. Louis. Earlier cons didn't have any fan panels. There was a dealer's room, an art display, a film room, autograph sessions, a costume contest, a banquet and charity auction, and a trivia contest.

A transcript of his speech there was printed in DFKIAS Yearbook 1982/1983.

Boldly Writing has a note about this con in regarding the zine Odyssey: "Among the many stories [in Odyssey] was a transcript of an interview with DeForest Kelley, recorded the previous year at a Space Trek convention in St. Louis. The editors asked the actor if he ever read any fan stories. DeForest Kelley replied, "Some of them I do. It's impossible to read them all.... There's some very good writing, you know. Some of the stories are better than the stories we did in the series."

It was chaired by Phyllis Sutter, co-chair was Linda Lakin.

From Boldly Writing: "This also was a fan-run convention with celebrity guests including Leonard Nimoy and James Doohan. The convention was almost devoid of panel discussions, which constitute the overwhelming majority of activity at many fan-run conventions. Evening programming was also in short supply. On the other hand, there was a large fanzine room, and videos and movies, and places to gather to talk to other fans."

Space Trek 2: From the Program Book

There was a con skit called "The Planet Spock" which was a satirical musical spoof of "Star Trek: The Wrath of Khan" written by Melissa Lee, Jean Ann Hodge and Phyliss Sutter.

This skit was unique in that it had a printed program.

The program book was 45 pages long. 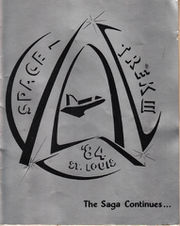 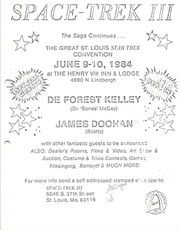 Space Trek 3 was held on June 8-10, 1984. The celebrity guests were Majel Barrett, DeForest Kelley, George Takei, James Doohan, and Harve Bennett. Art in the program book was all by B.J. McCrary.

DeForest Kelley's speech at this con was transcribed and printed in DFKIAS Yearbook 1984/85. 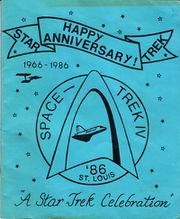 The guests of honor were Leonard Nimoy, DeForest Kelley, and Nichelle Nichols. Other guests were Caroline Kelley and Richard Arnold.

There was a display in the lobby area to commemorate the recent tragedy regarding the space shuttle "Challenger."

There was a raffle for a VCR. Tickets were $1. The VCR was an Emerson with "four heads, a wireless remote, slow motion, stop action, and lots of other features."

There are many accounts of this con, including interview transcripts, in Beauty and the Beast newsletters and letterzines. See Beauty and The Beast: The Newsletter and Passages.

This was to be my first American Con, so little did I know what I was in for. The flight was long and tiring, but after checking into our Con Hotel we went [to see] 'In Search of Spock' - and what a film that turned out to be. The Con itself started on the Friday morning with registration, a party with filk singing; the Dealers rooms were also open for early perusal and a few items were snapped up eagerly. The Con proper got under way early Saturday morning with talks by George, Jimmy and Harve Bennett - who talked about ST3 and even ST4; but the highlight was the talk by DeForest Kelley later that morning. De looked absolutely great and he received a tremendous reception from the fans. He talked about his role in the film and there was a question and answer session. Then it was time for us to line up for the autograph session, but we were disappointed when the line was stopped half way; and that could have been a disappointing end to the Con, but Monday made up for it. As we were due to leave and stay with a friend for a few days, we decided to wait in reception to see her. There were four of us sat chatting to a pen friend and a Canadian fan, when suddenly my arm was shaken and we saw De and his wife corning towards us. The Committee chairman brought them over to see us, we shook hands and had our photo taken with De. What a great end to a fantastic first U.S. Con. Roll on the next one. I won't forget it... [1]

This was my first American Con, but it certainly won't be my last. What an experience! The flight to St Louis was long and tiring, and after checking into our Con hotel, my friend and I went [to see] In Search of Spock. And what a film it turned out to be! The Con itself started on the Friday with registration, and also the dealers rooms opened for business. A few items from the film were snapped up quickly.

Jet lag then took over and an early night was indicated. Saturday dawned very warm and sunny. As there was to be an early start, George was due to talk at 9am, and De Kelley at 1,30pm so seats were taken quickly, so we would have a good view when De Kelley came on. I missed Jimmy's first talk as I wanted to look round the dealers but I heard he was good, as he always is. Soon it was time for the highlight of the day, seeing De Kelley for the first time. What a reception! The applause went on for ages and he was bombarded by flash cubes. He looked great and talked about his role in the film, and a general question and answer session. He was really great to listen to. Sunday came all too quickly, as it always does at Cons, and we were rushing for seats again. There was also an auction and a very good trivia quiz. During the second autograph line De had to stop signing because of a badly swollen hand, and it was disappointing not to have met him, but there was to be a surprise the next day. As we were to leave on the Monday with a penpal we hung around reception talking to friends when suddenly De and his wife came down the corridor and the committee member brought him over to meet us. We shook hands and had our photo taken with him. What an end to a memorable Con!

I just returned one week ago tonight from the Star Trek/B&TB convention in St. Louis. It was just wonderful. I had never been to a Con before although I knew a little about them because 1 have a good friend who is heavy into Star Trek and has been for years. I have heard her stories about the cons and fandom. So, I went knowing a little but wasn't prepared for such a good time.

Of course, the highlight was Ron Perlman. The look on his face when he entered the banquet room was great. I think he still must be somewhat awed by the popularity of the show and his character. If I had to describe him, I would say he is a very down to earth kind of guy. He has a wonderful sense of humor and was very open and kind to the fans. Several gave him gifts .. . drawings of himself, drawings of Vincent. One girl gave him a stained glass rose (beautiful) and a man gave him a ceramic statue of Vincent. These were not tacky gifts, these were beautiful works of art and Ron was very appreciative.

He was anxious to answer all his fans' questions and there were many of those. He did say that in December there would be a calendar out concerning B&TB, and they were in the process of putting together some tapes where he would be doing some readings - Shakespeare, etc. Also, he mentioned that the first and last episode of B&TB would be coming out on video tape soon. He spoke for one hour and then broke to begin the autographing session. There were a lot of people in line, but he was gracious enough to make sure we all got an autograph. I had my camera, of course, and took a lot of pictures which I just got back today and they turned out great. My "big" regret is that I did not know that video cameras are allowed and I could have taped his entire interview. Where was my camera???? At home in the closet. I guess I just figured that the studio would not allow the interview to be put on film. DARN! Oh well, I have learned my lesson. Many people there did have tape recorders and I didn't think of that either. But I will be prepared the next time.

Another enjoyable part of the Con was meeting other fans and getting to share experiences. All in all, it was just a lot of fun. [3]

Although the con was not a huge one (due to various difficulties such as the out clause that many actors have in appearance contracts, which is necessary for their work schedules but makes it difficult to do much advertising), it was a huge success in terms of enthusiasm. Aside from the anticipation of waiting to see Ron, there were several other things going on: a showing of the Cocteau film; a trivia contest (provided by yours truly); and an acting contest. This last turned out to be rather interesting; three couples were picked and asked to interpret a scene from "A Happy Life," and the couple who won consisted of two women, who were quite good!

One big bonus of the afternoon was getting to meet Ron Koslow, the creator of "Beauty and the Beast," who showed up In a sort of "anonymous" way at the door, apparently curious to see Just what was going on. (He's an extremely modest, not to mention shy man—he Intro duced himself at the registration table as being "with Ron Perlman."!)

I recognized him immediately and Introduced myself; I just had to shake his hand and thank him for this beautiful show he's given us. I tried to explain (though I was a little nervous and babbled slightly!) how much I appreciated the synchronicity, the emotional connections between the pilot and "A Happy Life," in particular the emphasis on the Idea of "aloneness" stressed In both of them, which shifts from being Vincent's condition in the pilot to being Catherine's state in "AHL." He actually seemed surprised and gratified that I had picked up on these connections (he doesn't know what we're like yet!) and thanked me very genuinely.

From there he went into the auditorium and sat in a row close to the back, probably assuming he wouldn't be noticed. Not a chance— within minutes there was a cluster of people around him. I did get one other chance to speak to him, and showed him a portrait of Vincent that my friend Pat Horowitz had done (with which he was definitely Impressed); I told him that he had given us a thing of such beauty and richness that we, as fans, couldn't help but respond, and that many of us, having been Star Trek fans for several years, felt that "Beauty and the Beast" was the first show on television since the original Star Trek series to have that same resonance and quality that appeals to people on such a basic but profound level. His eyes got really wide at that point — I had the feeling that he couldn't quite believe that he was being credited with having created a show of that sort of permanence and universality — and again he thanked me very warmly. Definitely a very nice man. I know that he has received lots of letters since the show began, but from his reactions to all the fans who spoke to him, I think he now has an idea.

[MUCH snipped about Perlman's one hour appearance]. [4]