You may also be looking for the adzine Communications Console.

Communications Console (often referred to as "ComCon") was a newsletter published by a Memphis, Tennessee club called Allies for Star Trek. The fan club began in the 1980s and remained active until the mid-2000s.

"Everything you've ever wanted to know about Star Trek before it happens! Up-to-date ST news and con information hot-off-the-wire... Star Trek is getting bigger and better than ever!... ComCon is published bi-monthly and runs about 25 pages. It's crammed full of ST articles, short stories, poetry, and artwork... ComCon is more like a minizine than a newsletter." [1]

Communications Console March/April 1984 contains 20 pages. It was the first issue under a new editor, Debbie Gilbert.

The cover and interior art is by Annette Taylor and someone named James.

There is but one universal constant —- change.

You hold in your hands the first issue of ComCon produced under its new editor, who through some quirk of fate happens to be me. As a friend of mine, the editor of TrekisM has told me, "things look a lot different from this aide of the desk". Reactions to the "changing of the guard" have ranged from total support of the "new management" to a wait-and-see attitude which dares us to prove we can do the job as well as did our predecessors. Allies members who live out of town have good cause to be apprehensive; for them, the newsletter is virtually the sole manifestation of their membership. It's very important that they receive a quality product.

Allies, this is your newsletter. It's my job to give you what you want. Everyone, out-of-towners especially, is urged to drop me a line and air their opinion. What do you like best (and least) about ComCon? What features would you like to see more (and less) of?

Your submissions, of course, are always welcome. However, now is a good time to clarify my editorial prerogatives, I reserve the right to make minor grammatical revisions of material. I also have the final say on what ultimately will grace the pages. How do I decide what goes in? In general, the more directly an item relates to Star Trek, the greater its chances of seeing print. Original creative work by members receives very high, priority. Thus, if you send in a review you've written of a recent ST novel, I will almost surely print it, whereas if you submit a TIME magazine article on computer gaming, I probably will not use it.

I'd like to see more illustrations, especially cartoons. I know that many of you possess imagination and creativity -— give me some tangible evidence of it! Unfortunately, many of the pictures I get cannot be used. Here are a few guidelines; no color photos! Make ink drawings dark, and make sure that all details and words can be clearly seen (remember, its size will be reduced at the printer's).

One final note, concerning the use of the editorial "we". It doesn't exist here. "I" refers to my opinion only, not to that of Allies as a whole. "We" refers to the collective opinion of the officers —— Jeannie, Joel, and myself. 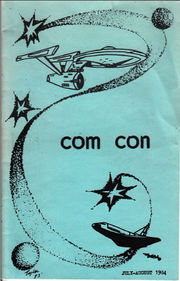 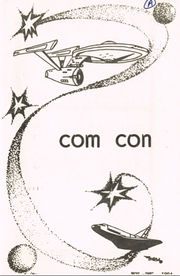 back of Nov/Dec 1984 issue -- two items of interest: the fantastic sehlat illo, and the fact that this issue was sent to Gene Roddenberry as a courtesy 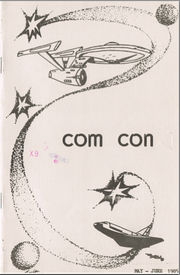 cover of the issue published in May/June 1985 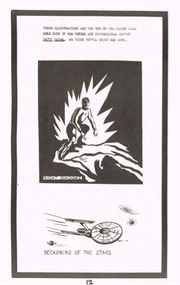 some art from the May/June 1985 issue, Patti Pasda
From the editor:

Folks, I need your help. We're putting together a special issue of ComCon this summer. Sure, I know every issue has been special in one way or another. But this time we're aiming for something extraordinary.

What's the occasion? In the month of July, Allies for Star Trek is celebrating its tenth anniversary. Given the ephemeral nature of fan organizations, our club's longevity is rather incredible. I think the key to our success has been our ability to ride the tide. In the fever pitch oi enthusiasm surrounding a major Star Trek event such as a new movie, fans get caught up in the excitement and clubs spring up overnight. In the lull between films, however, momentum is lost, and these fledgling clubs are often disbanded. We've survived because we are able to switch gears, to move into a low idle but still maintain a certain level of interest among our readers. The world of Trek fandom is apparently in a doldrums period now, but I'm asking all of you to shake off your inertia and get your creative fires heated up. We'd like as many of you as possible to help us observe our first decade of existence.

I don't want to do merely a straight history of the club, starting with the circumstances of its founding. Ninety-eight percent of our current members (including ye old editor; were not present for that historic occasion.) But just because you are not a member of the "old guard", it doesn't make you any less a part of Allies. What I'd like to see are highlights of the club's history from your, point of view. What is your most cherished memory? Your most unforgettable moment? Think back carefully on all the cons, the trips, the parties, the promotional work we did for the movies. Pick one or several and write about it. (I warn you: if you don't write something, you'll have to listen to me rattle on. Just offhand, I can already think of half a dozen experiences I'd love to reminisce on.) Out-of-town members whom we know only through correspondence: your participation is needed also. You can write about what being a part of Allies—receiving the newsletter and being in on a nationwide network of fans and friends has meant to you. You could even broaden it to explain how Star Trek has influenced your life.

Submissions can take any form you choose —— essay, poem, cartoon or drawing—but we'd like to receive them by the 15th of June. Our goal is for as many of you as possible to participate in assembling our "Allies Ten-Year Scrap-book", So, as our Vulcan friend says, "Remember" —— and send it in! 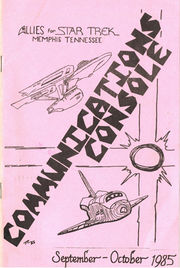 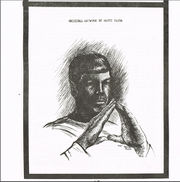 some art from the Sept/Oct 1985 issue, Patti Pasda
From the editor:

WE ARE SORRY!!! We know that the newsletter has been difficult to read lately, and this is unacceptable. It grieves us that you should spend your hard-earned money for a substandard product. But we are trying to correct the problem: Jeanie is working with the printer to see if we can't get darker reproduction, and I just spent $30 to repair (supposedly), the tension control on my typewriter. So this issue should be more legible. If you still find it unsatisfactory, please let us know at once.

We are also sorry in a different way -- sorry that each and every one of you couldn't make it to the "barbecue bash" on July 20th. It was Allies' biggest party ever! Coordinator Lauren Bauer accomplished a miracle of planning and the party room at the Mall of Memphis was perfect for once we weren't cramped like sardines in somebody's living room! The front half of the room offered visual entertainment ("The Planet Spock" play, the blooper reel, animated episodes, and Terry's film of our Space Trek trips), while the back section held alternative activities. An entire table was filled with members' photo albums depicting ten years of memories, I spent half an hour wallowing in nostalgia. Another table was set aside for games. I engaged trivia maven Emily Ross, along with several other out-of-towners, in a battle-of-the-brains, but the new Star Trek trivia game proved too easy; nobody ever missed a question! (It wasn't designed with people like us in mind!) And of course, there were two tables laden with food. In addition to the barbecue Lauren had ordered, there were the usual drinks, snacks, and several cakes, one of which read: "Allies: A Perfect 10" After new members were initiated with "The Claw", Lauren and Jeanie handed out awards. Though I am nominally a part of the "exec-com", I knew nothing, of this, so I was very surprised and pleased to receive a beautifully scripted certificate for "excellence in writing and editing." (Melissa did the calligraphy, in addition to making the wonderful signs and posters adorning the walls. Jean Ann and Inge were given marble plaques for their past years of service. The only drawback to the party room was that we had to vacate by 10 p.m. But a few of us die-hards continued our fun over at Fred's house, where we watched the movie "Splash" on TV, It was great to renew old friendships (as with the Jacksons —— my, how James T. has grown!), and to make new ones (as with Alisa Schnaars, whom I previously knew only on paper). Allies is a terrific bunch of folks, and I'm lucky to be a part of it! 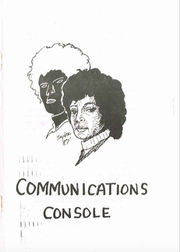 The editor says this issue is the fifth one, but this doesn't make sense. 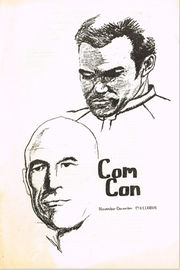 The cover is by Jane Dike.