From Fanlore
(Redirected from Here Comes the Brides)
Jump to: navigation, search

Here Come the Brides is a Western television series that aired on ABC from 1968 to 1970.

Here Come the Brides is sometimes crossed-over with other television series of the era, for example Alias Smith and Jones[1] (which was also a Western on ABC), Starsky & Hutch,[2] and—most commonly—Star Trek.

Star Trek/HCTB fiction are usually same-actor crossovers: the HCTB character Aaron Stempel (also spelled Aaron Stemple) is played by Mark Lenard, who also portrayed Sarek in Star Trek: TOS and TNG. Several other actors also appear on both shows. Ishmael is a 1985 Star Trek pro book that is a crossover with HCTB (published without permission from the HCTB owners) and alludes to the Stemple-Sarek connection. An earlier example of a crossover featuring these characters is "Echoes Through Time" by Eileen Roy, published in Paladin #1 (1980). 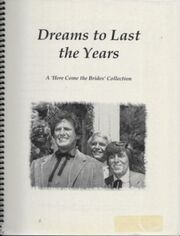 Front cover of the 2004 fanzine Dreams to Last the Years.