Same-Actor Crossover is a crossover that features two characters who are played by the same actor. A story where characters played by different actors supposed to be one and the same are not same-actor crossovers, but same-actor fusions. A notable example of this trope is Stilinski Twins from Teen Wolf fandom.

This crossover can be achieved in several ways:

In some cases, several of the above could be used at the same time. 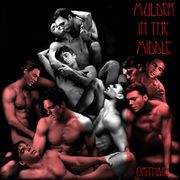 Mulder in the Middle cover by The Theban Band. It shows Mulder, Krycek, seven Krycek clones (characters the actor played on other shows and one OMC), and Mac Ramsey, the other half of the Vic/Mac pairing from Once a Thief.

A common variation of the Same Actor Crossover takes one half of a popular OTP and pairs them off-- not with their usual partner, but with someone who looks almost identical to that partner. These types of stories are extremely common in 6 Degrees of Canada and Stargate Atlantis (Hewligan), among others.