Morgan is a gen crossover 45-page novel by Judith Proctor. It won a 1999 FanQ. Art by Whitby27. Summary from the publisher, "Avon wakes up in Wales in 1984 - who is Morgan and why does he bear such a strong resemblance to Blake?" Judith writes:

We get more favourable feedback on this zine than on anything else we sell. Avon wakes up in Wales in 1984, with no memory of how he came to be there and no knowledge of how to get back to Liberator. How will Avon cope with the perils of twentieth century life when faced with challenges like the British social security system? Who is Morgan and why does he bear such a strong resemblance to Blake? [1]

It is a crossover of the form where an actor, here Gareth Thomas, plays two different roles.

Morgan is a crossover between the universes of Blake‘s 7 and Morgan‘s Boy. It is written for those who have never seen Morgan‘s Boy, and probably never will unless the BBC repeat it. It assumes no prior knowledge of the series at all. All you need to know is that Morgan was played by Gareth Thomas who was nominated for a BAFTA for his performance.

The story began as nothing more than a fragment of a dream that I typed up and sent to Val for her amusement. She wanted to know what happened next. I hadn‘t actually thought there was going to be any more! But with her encouragement and that of the members of the Space City mailing list, it grew and took on a life of its own. That fragment became the novella that you see before you. In spite of some of the earlier chapters being serialised on Space City (which is an adult list), this is not an adult zine. In fact, it‘s not a story in which sex has any part to play at all. It‘s the tale of two men with very different backgrounds and beliefs, and the relationship that develops between them.

Morgan has been over a year and a half in the writing. Every time I had another zine to edit and layout, it got sidetracked. It never got abandoned though. Morgan is a character who calls out to me and would not let me forget him. I've put more of my heart into writing this zine than into anything else I‘ve ever done. It‘s going to seem odd not having him around any more. I think Val got caught up by Morgan too. She's done some of her best art ever in her illustrations for this story. She‘s caught the subtle differences that make Morgan different from Blake. In fact, and I hope she‘ll forgive me for saying this, she draws him better than she draws Blake.

I had a compulsive need to get the details right in this zine. Apart from the physical details of the town of Brecon, everything, touch wood, should be accurate. This is due in no small part to those friends who helpfully gave me information on everything from social security forms to the finer points of sheep sheering. The spread of skills to be found among Blake's 7 fans is truly amazing. Thanks particularly go to Ruth Saunders, Louise Rutter and Tom Forsyth.

Thanks also go to those who read and commented on the text, especially Lillian Sheperd and Neil Faulkner. Special thanks go to Gareth Thomas for a late-night conversation at the last Who's 7 convention which had a major impact on the way that the story developed. Lastly, I mustn't forget my husband Richard who contributes in so many ways to these zines, even though he is not, and probably never will be, a Blake's 7 fan.

This zine is for many people, but most of all for Gareth Thomas. Not for Blake, nor even for Morgan, but for being himself: generous, warm-hearted and loved by so many who know him. [2] 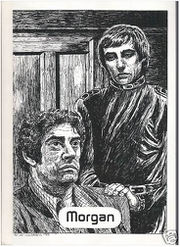 The beginning of the story is here. The complete story is archived online at the Hermit Library, here. This version received the fourth highest hits of stories in the Library.

A teleport malfunction dumps an amnesiac Avon in 20th Century Wales, where he's met by a suspiciously familiar figure. 'Morgan' blends B7 Plot Devices #5 & #7 with a crossover with a series virtually no-one's seen -- yet the result is genuinely moving, as Avon struggles to adjust to his new life, and Judith resists providing any easy fixes'. (Espresso Addict)[3]

Avon comes around from unconsciousness in what he discovers to be 1980s Wales, with no memory of how he got there, and no idea of why there is also what he takes to be a clone of Blake in 1980s Wales. The last thing he remembers is being on Liberator some months after the Andromedan war, with Blake still missing. Avon has to cope with a society and mores very different to the one he grew up in--and finds that he can cope with its bureaucracy rather better than Morgan can. Even so, he needs Morgan's help and support while he tries to discover how he came to be there, and until he finds that out, he has no chance of returning home. It's a tale of how two profoundly damaged men form a friendship that allows them to deal with having lost everyone they ever cared for. The story plays off the fact that Gareth Thomas, who played Blake in Blake's 7, then went on to play Welsh hill farmer Morgan in the BBC series Morgan's Boy. It's written so that you need no knowledge of that series. It does have a spoiler for the last episode of Blake's 7. [4]

Avon wakes in a strange place and, as he soon realises, an earlier time in history, with no memory of how he came there. Nor will he have, until right near the end, and the twist there is so convincing and impressive that I won't do anything to pre-empt it. He is in fact in Wales in 1984 and being befriended by a man called Morgan who looks exactly like Blake. This is for the good reason that though, character-wise, the two aren't actually much alike, both are the actor Gareth Thomas, who, after he'd stopped being Blake, played a Welsh hill farmer in the series Morgan's Boy. It was really rather a bright idea to crossover the two sources, and you don't need to have seen Morgan's Boy to follow what's going on as the anti-social Avon learns to relate to and care for another human being. BTW, Morgan's Boy isn't well known, but wasn't a bad series and is worth seeing if you ever can; it has a powerful central performance from Thomas. [5]